What do you call a brand/logo panel that a company often carries along to a trade show?

Let say there is a company named BlueEvin. The company has an object made of plastic or wood that shows the name BlueEvin. The object could be the size of a PC keyboard or smaller. The company often carries that object to a trade show or a conference and puts it on their table so that potential customers can know the name of that company.

I call it a brand/logo panel, but I think there is a better term for it.

So, what do you call the object like a brand/logo panel that a company often carries along to a trade show?

Generically, it's a table-top display sign and would be part of a trade show display. There are many designs- L-shaped, or convex like this one: 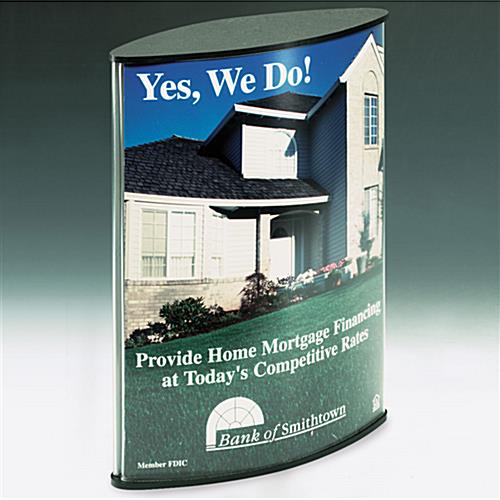 The kind of trade shows that are more like conferences with small low-key booths that consist mostly of a draped table and some signs are sometimes called "table-top shows" to distinguish them from big high-budget trade shows with enormous custom-designed booths.

What do you call an object 1) the size of a PC keyboard or smaller; 2) a company carries to a trade show and puts on their table 3) so that potential customers know the name of that company. 4) I call it a brand/logo panel

Although these objects are commercially marketed nowadays as “table-top display signs,” as documented by Spehro Pefhany, they are also referred to as placards and posters.

placard noun: 1. A sign or notice for display in a public place. 2. A small card or plaque, such as a nameplate on a door. synonyms: notice, poster, sign, bill, advertisement; see, the Free Dictionary

poster noun: 1. a placard or bill posted or intended for posting in a public place, as for advertising. see, Dictionary.com

poster (n.) "bill, placard, thing posted," 1838, from post (v.1). Poster boy/girl/child "someone given prominence in certain causes" is attested by 1990, in reference to fund-raising drives for charities associated with disability, featuring child sufferers, a feature since 1930s. see, etymonline

Obviously this should be smaller than a Sandwich board. (https://en.wikipedia.org/wiki/Sandwich_board)