Term for composing/melodizing a fictional song

Is there a special term for composing/melodizing a fictional song?

Some novels have songs with made-up lyrics written by the authors; and sometimes, music is composed for those songs in real life.

For example, there is a fictional song called The Bear and the Maiden Fair from the novel A Song of Ice and Fire by George R.R. Martin. Later, for the TV show Game of Thrones, they composed music for the song.

The producers of Game of Thrones enlisted Brooklyn indie rock band The Hold Steady to record a version of the song, with music composed by Ramin Djawadi. Their cover of the song plays during the end credits for episode 3 of Season 3, "Walk of Punishment".

I did some research and couldn't find a term for what I am looking for; but I found something different (almost vice versa) but related:

In Elmegreen’s novel “Reveille,” written as his thesis project, the thoughts and emotions of the main character, a musician named Spencer, and others sometimes emerge as musical notes rather than words. 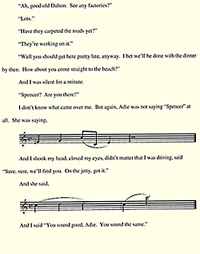 It is described as writing the melody of a novel and composing the soundtrack of silent reading.

In the Bard's Much Ado about Nothing, Act 5 has a line

Can labour ought in sad invention, / Hang her an epitaph upon her tomb / And sing it to her bones, sing it to-night:

And at the end of the same Act,

Think not on him till to-morrow: / I'll devise thee brave punishments for him. / Strike up, pipers.

Note that while Shakespeare wrote the words that would be sung for the dirge, he did not compose music for either the dirge or the dance. But when a composer composes or a musician or actor improvises, they are creating incidental music.

Consider another Shakespeare play, A Midsummer Night's Dream. The Bard did not compose music for the play. But consider what would be composed by Felix Mendelssohn more than two hundred years later.

Later, in 1842, only a few years before his death, he wrote incidental music (Op. 61) for a production of the play, into which he incorporated the existing Overture. The incidental music includes the world-famous Wedding March.

The term to describe the process would be:

By the way, when a composer writes a piece after a fictional hero, such as Strauss concerning Don Quixote, it is called a Tone Poem. A similar term is used for Liszt's portrayal of Faust or Hamlet or Prometheus: a Symphonic Poem.

a song within a novel

(inspired by "a play within a play")

Not the answer you're looking for? Browse other questions tagged single-word-requests terminology music or ask your own question.

5
Word for listening to a single song over and over
4
Is there a word for scrambling lyrics because the melody is repeated?
7
Who first objected to the term "chain mail"?
1
Term for the Fear of Fictional Characters
11
What do you call all the pieces of a song minus the lyrics
3
Term for addictive song, replayed too many times it is hated or neutral now
0
Post-song Terminology