How did 'trust' evolve to mean 'businesses organized to reduce competition'?

Most of the definitions for this noun connote positivity, but not the commerce one above.
So how did this reversal (ie about-face; volte-face) develop?

Please help me dig deeper than the definition, which I already understand and so ask NOT about. Please amplify, explain and reveal this etymology's (hidden and missing) semantic drifts and links, which I struggle to connect and perceive. What are some right ways of interpreting the etymology, to make the semantic jumps less abstracted and severed from the original literal meaning?

I don’t quote the OED’s brusque entry, which does not appear to explain the etymology.

It wasn't so much that the word "trust" evolved to mean "businesses organized to reduce competition"; it's that the businesses organized to reduce competition evolved to become trusts. A trust is a fictive legal person authorized to perform actions ordinarily associated with real persons, including operating a business, owning property, borrowing money, buying, selling, renting, litigating, etc. The details of the allowable operations are spelled out in the trust document, which is animated by one or more actual persons called trustees who act on behalf of the person who established the trust, the trustor. The trustees have a fiduciary duty to exercise their trust powers in the best interests of the trustor. The details of the trust are generally secret and with no official oversight, the trustor must have confidence in the trustees, hence the name.

The original bad player in the trust business was the Standard Oil Trust, set up in 1882 by John D Rockefeller to hold the assets of his company the Standard Oil Company of Ohio. It eventually came to hold all of the Standard Oil businesses. This would not have been possible had Standard Oil remained a corporation because in an attempt to control monopolies, states had restricted the ability of one company to own the shares of another.

According to the following extract the shift in meaning took place in the second half of the 19th century: 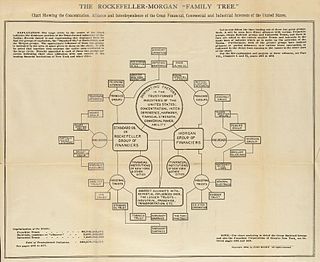