This is sort of a follow up to my question here.

I was told a while ago that the reason why we use "on the bus" instead of "in the bus" is because back in the day buses were open, that is, they didn't have a roof.

Is this story correct or is there another reason why the correct expression is "on the bus", in spite of the fact that when one gets on the bus, he is actually inside the bus?

I doubt that story. It's hard for me to imagine how one would verify it in any case.

Notice that mass transportation generally uses "on". "On the bus", "on the train", "on the plane".

On the other hand, cars and small recreational airplanes would be "in". While small vehicles that are not enclosed are "on": "on the bike" "on the motorcycle", etc.

My intuition is that it has something to do with the notion of boarding or embarking. I would never say I boarded my car. But to board something is basically to "step onto" something. Again, it depends on how the event is conceptualized. There may be a historical explanation, but again I would be wary of them without substantial empirical support.

Having said that, I think the more likely historical explanation would be that "on" is used for mass transit by analogy with traveling by boat -- the first form of mass transportation.

It is less about "on the bus" and more about the meaning of "get on":

The Visual Thesaurus illustrates many other definitions of "get on", including a social aspect (getting along with), which is why: 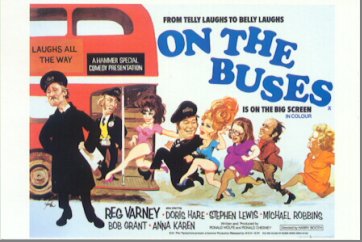 You did not just get in a bus, but also on an adventure with people you were about to interact with.

The notion of using "on" with open conveyances is valid for some things - bicycles, horses, and farm tractors, for instance. However, the difference with other conveyances is whether one is customarily sitting or standing when using them. Getting "in" a boat or plane means it is so small that users are not normally able to stand. Getting "on" a boat or plane, however, means it is large enough for users to easily stand. The same for a truck - if "in" the truck, you are sitting, but if "on" the truck, you are standing (probably on the truck bed). For an elevator, the difference is a matter of emphasis - usually, you get "on" an elevator as you do any other "standing" conveyance, but to say you are "in" the elevator is a contrast to being outside the elevator - you are inside the structure. Conversely, you get off of conveyances that you get on, and you get out of conveyances that you get in (get in / off the ship, get in / out of the car).

This question is answered in relation to two-dimensional and three-dimensional usage for on/in in John Lawler's answer to Why are you “On a train” yet “In a car” when you are inside both vehicles?

Not the answer you're looking for? Browse other questions tagged etymology prepositions or ask your own question.

35
Why are there two pronunciations for “either”?
183
What is the origin of ZOMG?
2
Usage of the word “head”?
10
Why are pounds sterling called “knicker”?
14
Origin/reason for the “hit by a bus” phrase
2
Is it correct to write: “She told her to phone him the morning of the next day.”
5
Postpositions in English and “ago”
6
When did 'smoking gun' become a set phrase?
0
Why doesn't a that-clause follow “in spite of”?