Ask Question
Asked 6 years, 11 months ago
Modified 7 months ago
Viewed 5k times
0
Locked. Comments on this question have been disabled, but it is still accepting new answers and other interactions. Learn more.

Facebook just sounds like a social media site, but the word facebook originates from something. I looked online and found nothing relevant to the origin of the word. Would you please shed a light?

Note: The question is about the noun facebook and it is not directly asking the origin of the proper noun Facebook (the company name).

Although, as a side note, it is mentioned that the trademark of the company is in lowercase but it starts with upper case most of the time:

The official trademarked name of the social-networking service and website is spelled “facebook,” all lowercase letters. Formal writing style—as exemplified by most news and book publishers—is to treat such names as regular proper nouns, in this case “Facebook,” using an initial capital letter. dictionary.reference.com

The noun facebook is not easily searchable in Google and Google Books (because of the vast amount of "Facebook" results). Additionally, Google doesn't offer case sensitive search.

It is not in OED also.

directory listing names and headshots, by 1983, originally among U.S. college students, from face (n.) + book (n.). The social networking Web site of that name (with capital F-) dates from 2004.

It is hard to trace back the noun "facebook" in Google Books (because of "Facebook") but I could trace back to 1988. Here is an excerpt from the book Letting Go: A Parents Guide to Today's College Experience from 1988:

We were supposed to send in a picture to be in the freshman facebook. I didn't want to have my face in the facebook.

@ermanen's etymology is correct, and Harvard definitely had a physical printed book that listed students' names and addresses, but Zuckerberg most likely got the name of his social media site from the printed directory produced by his high school, Phillips Exeter Academy. 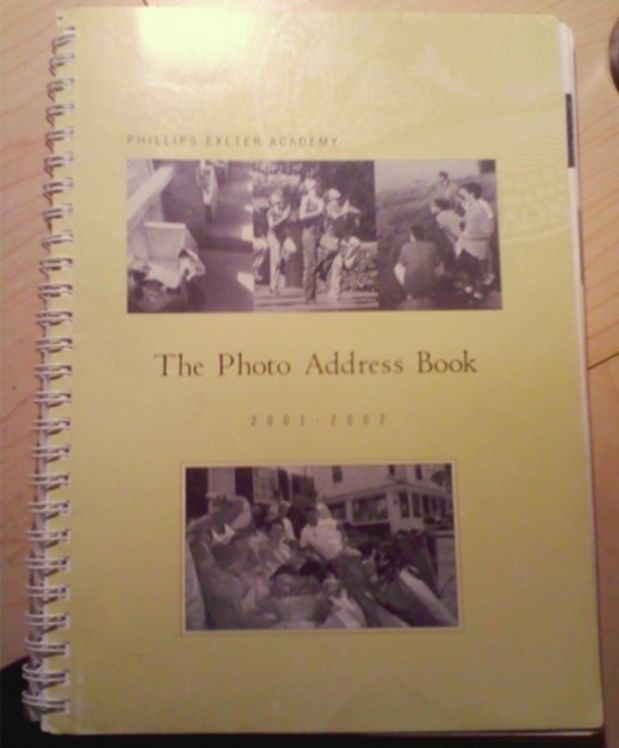 Check out this article, where a former Exeter classmate of Zuckerberg says,

Also note that the first version of Zuckerberg's site was called "The Facebook".

And here's a fun clip from the movie The Social Network where you hear Harvard students referring to it as "the facebook".

George Utley: The Beavers are putting out a facebook.
Dick Loudon: facebook??
George Utley: You know, a book of pictures of our faces with our names under them. All the Beavers except me have nicknames ...

The earliest occurrence I've found of the term "face book" to mean a student directory with pictures dates to 1968. An article in the Newark Star-Ledger describes a book with pictures and profiles of 1,500 students at eight women's colleges, put together by editors at Princeton University's student newspaper. The book, according to its editor, Peter G. Brown, was designed to take the "blind" out of blind date.

That might not qualify as the earliest use of "face book," but the article quotes a first year Smith College student as saying every student in her dorm submitted a picture "because the fellows at Princeton have promised to do our student handbook."

True, said Brown [the article continues], the pictures will do double duty. Princeton will publish what he called Smith's 'face book'."

Northwestern University had a "face book" as early as the 1970s. It's mentioned in several articles in the student newspaper. The earliest one I've found is from 1973.

ASG representative Bill Roegel is currently working on the registry, or 'face book' as it is commonly called, which would contain names, photographs, and hometowns, and possibly campus addresses, hobbies, and majors of incoming freshmen.

Princeton's own directory of first year students, the Freshman Herald, was referred to informally as "the face book" as early as 1974. A whimsical "Official Princeton Dictionary" in the Daily Princetonian a year later defined "face book" as "n. The Freshman Herald, indispensable reference tool, with the photo of everyone in the class. Makes good reading on a Saturday might." (July 25, 1975, p15.)

I'll bet there are other examples from colleges earlier than 1968.

When I went to college in the sixties both my school, Rhode Island School of Design and neighboring Brown University had mug books or face books wher you could search for your classmates by name or face.