Why do some words have two past tense forms (e.g. "dreamed" vs. "dreamt")?

While perusing ShreevatsaR's answer to this question, it occurred to me that my own verbal usage is out of step with what I see in current American literature. When speaking in the past tense, I prefer to use the following forms:

However, when reading recently written novels, I see the more regular conjugation of the past tenses, which instead yields dreamed, leaped, sweeped, and lighted. Is it a difference of dialect (US - New England), register (university education), or (possibly) my age (early forties)? I am especially irritated by "lighted" because it takes so much more effort to say than "lit".

CLARIFICATION: Given Jon Hanna's answer below, I would just like to clarify the question a bit more. What I was originally after was why these separate verb forms exist in the same past tense. In other words, variations such as "I dreamt" vs. "I dreamed", not the variation between different forms in different pasts. I am not a linguist, so I hope that clears things up a bit.

I did some research using the Corpus of Historical American English to see if I could track the history of these words. Each of these words has a different story to tell. 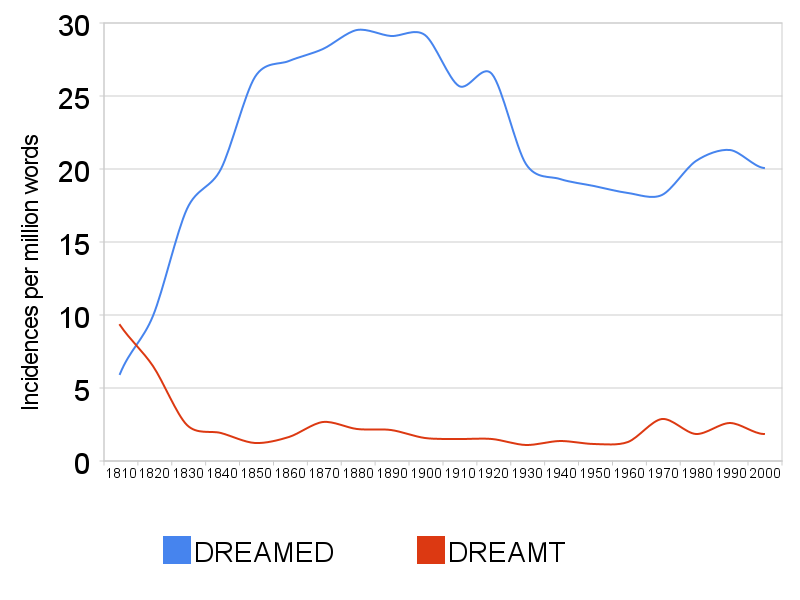 In the early 1800s, dreamt was more common than dreamed but by the mid-1800s, dreamed was much more common and has stayed so since. While there is nothing wrong with continuing to use dreamt, dreamed is definitely the more common form. 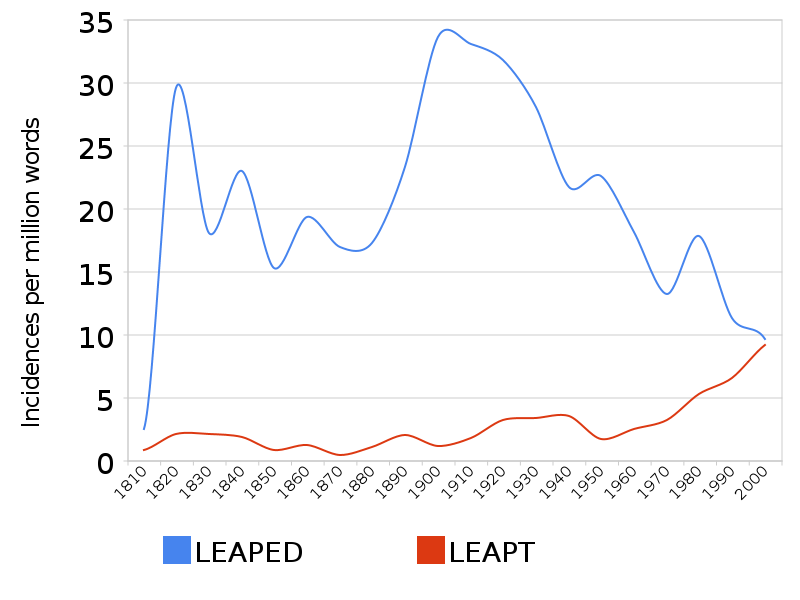 Leaped has long been more popular than leapt, though leaped has been in decline since 1900, and leapt has been on the increase since 1950, and today they are about equally common. It is likely that if the current trends continue, leapt will become decisively more common than leaped within a decade or two. Indeed, in the Corpus of Contemporary American English, leapt has 484 incidences for 2005-2010 and only 460 for leaped. So, both are about equally common these days and you are in good company if you prefer leapt.

Neither COCA nor COHA have any results for sweeped, nor does any dictionary I checked list sweeped as a possible past tense form for sweep. Sweeped doesn’t appear to have had any currency in American English since 1810. Google reports only 43,000 results for sweeped compared with 78,000,000 for swept. 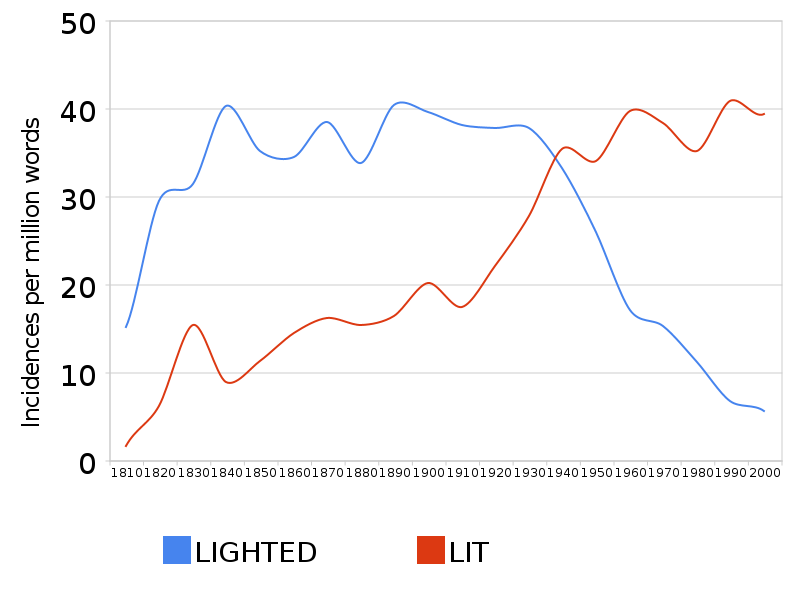 Apparently, lighted was much more popular than lit, from the early 1800s until about 1940. During this time lit was steadily gaining popularity, while lighted began a precipitous decline in 1940. Today, lit is much more popular than lighted, so if you prefer lit, you are in very good company. However, there would be trouble objecting to lighted on historical grounds, as lighted was by far the most common form until the 1940s.

nohat's answer speaks well to some of the trends with such forms, but not to the question of why such cases happen as per the question's title.

Indeed, if we accept swimmed, then we have a verb with three past tense forms; swimmed, swam and swum. However swimmed is not normally considered standard. Abided, abode and abidden would be another example, but abidden is obsolete.

But while it's not one that would meet with full approval from all, that three-fold case talks to one thing that needs to be gotten out of the way. There are two past-tense forms to every word, but in most cases they are the same. There are also two patterns for forming those past tenses, and that is what is at play here.

One of the past forms is called the simple past, past simple or preterite. For example, of the verb eat, the preterite is ate.

Each has several uses, but for now the use in the simple past and present perfect suffices as an example:

I ate the pie.

I have eaten the pie.

Older Germanic languages had two main classes of verbs. Jakob Grimm named these weak and strong verbs. Each of these in turn were split between different classes.

Weak verbs had different forms (not just for the past tense forms, but person and number too) produced by changing the ending, strong verbs by changing a vowel sound, and sometimes adding an -n sound.

By modern English, only two classes remained of weak verbs, and only one of them is productive (we apply it to new verbs when they come into the language).

This form creates both past-tense forms by adding -ed (or -d if it ends in an e).

Any other weak verb got moved into one of these.

Strong verbs have a larger number of classes. These are sometimes named the drive, choose, bind, bear, give, shake & fall classes after examples of each. While each has a different pattern, some examples have changed in such a way as to not really fit that pattern any more. The words that have different preterite and present participle forms are strong verbs. Eat, which was our example above, is of the give class.

Generally when a new word is added to English (by coinage, forming a verb from another word, or borrowing from another language), they are weak, and take an -ed to become past tense. A small number of words have come into English as strong verbs by analogy with a rhyming word (strive after drive, fling in the drive group, matching ring and cling etc.)

This in itself is a reason to account for most English verbs being weak.

This has been happening from the Old English period on, and continues to happen.

This is a source of some of our two-form words. Abide for example has both abided and abode (and the archaic abidden).

While less common, it can also go the other way, with weak verbs becoming strong in much the same way that some words are taken into English as strong.

This gives us some other examples; light was weak, with lighted existing earlier, but we now also have lit.

Finally, the weak verbs can change class, so the examples that don't end in -ed can develop a form that do; dreamed emerging to compete with dreamt.

We have some that did one, and then the other; Dive was strong, then became weak, then had a re-invented weak form dove that is generally considered incorrect as a participle.

We have some odder cases. While these different forms are strictly exact synonyms, there having different sounds can give one and advantage over the other (e.g. I suggest here that apart from lighted being more popular at the time, Hemmingway had a reason to favour the word with an /aɪt/ sound in that story, because he frequently rhymes that /aɪt/ sound throughout), and people develop idiosyncratic preferences for one over the other in certain senses. Sometimes these are picked up by others, and become a full difference in sense.

Strike would once have been struck and stricken for simple past and present participle, but now stuck and stricken are used with different meanings for the participle. (This is an exception to the general pattern above, as both come from strong forms).

Hang is also a strange case, with its "meat is hung, men are hanged"* rule.

Since there are continual mutations both in the creation of new forms of such words in both directions, and in the relative popularity of each, regional differences form. British and Irish English is generally more likely to use the strong form, American the weak, but there are exceptions.

It's also generally the case that the weak becomes more popular than the strong (to the point of often making the strong extinct), but again there are exceptions as nohat's graph of lighted vs the relatively recent lit shows.

All your examples are examples of this in one direction or another. dream was originally weak (and originally meant "sing" or "rejoice") but of the class that had its past dreamt, but some people treated it as the other class and produced dreamed.

Likewise light only had lighted. It acquired lit from people treating it as strong. But those new past tenses never entirely stamped out the previous, so we still have dreamt and lighted too.

Leap was a strong verb, so its original forms was lept, but some people applied the more common weak form to produce leaped and again neither has completely overcome the other.

Sweep is still normally taken to only have swept as it's past tense, with sweeped generally considered incorrect, and not included in most dictionaries. That you have seen some people use it would point to the reason it's common for strong verbs to become weak (or at least to have the weak form as a variant); a few people adding -ed to such a verb is an error, a sizeable percentage of the English-speaking population doing so, is a change in the language.

I've been encountering "leaped" a lot in modern literature and I detest it. I'm from the Pacific Northwest and I'm fairly sure that I was taught (teached?) that this was the proper form. I've kept (keeped?) searching to try and find some sort of demographic breakdown, but haven't encountered anything so far (other than the above charts from nohat). I've decided to pronounce it "leapt" to my children even if it is spelled "leaped". I'm not sure if it makes sense to make verbs more regular at the expense of awkward pronunciation. For example:

Why do two forms exist? My theory is that there are three reasons:

Not the answer you're looking for? Browse other questions tagged american-english past-tense pronunciation-vs-spelling ed-vs-t or ask your own question.

4
Why is Gilt a word when we have Gilded? Is this town big enough for the both of them?
2
"Dream, dreamt" and "learn, learnt" irregular verbs: correct or not?
0
is this correct; using lighted rather than lit?
37
Is it "despite" or "despite of"?
42
Correct position of "only"
38
Plural form of 'schema'
30
What is the distinction between "among" and "amongst"?
34
When do you use “learnt” and when “learned”?
21
Past tense of wake: is there a difference between "waked", and "woke"?
11
What's the difference between "well-lighted" and "well-lit"?
See more linked questions

17
Why is there no consistency in the plural forms of words ending on an "f" (e.g. safe, roof, dwarf, etc.)?
9
Is the use of 'shew' and 'glew' as the past tense of 'show' and 'glow' commonplace in some areas?
3
Words that are their own past tense
0
Why does the Past Tense not include Past Participles?
0
Why is the past tense of "mind" not "mound?"
2
Past tense: "happen to have" or "happened to have"?
0
Why past tense and not past perfect