Ask Question
Asked 7 years ago
Modified 6 years, 11 months ago
Viewed 25k times
5
This question already has answers here:
What is an idiom/slang for "someone who pretends to be good when they're not"? (9 answers)
Closed 6 years ago.

What can you call a person who is cunning but depicts themselves as innocent to others?

single-word-requests phrase-requests
Share
Improve this question
edited May 27, 2015 at 20:29

I've always called this by the old phrase

A wolf in sheep's clothing

snake in the grass (dictionary.com)

snake in the grass (noun) 1. a treacherous person, especially one who feigns friendship.

Although many possibilities exist, I prefer using "devious" for this type of behaviour.

devious
: willing to lie and trick people in order to get what is wanted
: not straight or direct
: having many twists and turns

"Two-faced" is a common expression that is readily understood by most.

adjective having or showing a cunning and deceitful nature.

This definition contains both the word cunning you were looking for and deceitful implying it fools others. So I think it would be a fitting choice.

You may refer to a person who practices sandbagging as a sandbagger. As indicated by the emphasized portion of the definition below, it speaks specifically to acting innocent.

A person who pads a handicap or acts as if he/she is at a lower skill level than he/she actually is so he/she can achieve better during competition that's handicapped or by skill level.
The Urban Dictionary

One of the verb definitions of sandbag is:

: to hide your true abilities or purpose in order to deceive people, gain an advantage, etc.
Merriam-Webster

Sandbagging is a poker tactic, and is also known as slow playing or trapping. But, as seen in the definitions above, it can be used beyond the context of poker.

Slow playing (also called sandbagging or trapping) is deceptive play in poker that is roughly the opposite of bluffing: betting weakly or passively with a strong holding rather than betting aggressively with a weak one.
Wikipedia 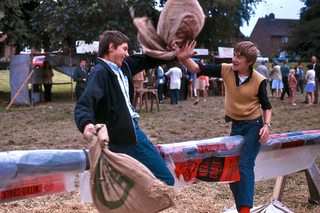 But, alas, that is not reality. The term came from ruffians who literally took bags of sand and hit people with them. When the term was applied to poker, it was meant to denigrate a slow player, but instead it came to be a synonym for the tactic itself.Etymonline

A shark. As in, a pool shark is one who pretends to be a novice in order to trick others in to placing bets at which time the shark runs the table and takes their money.

The same day there came certain of the Pharisees, saying unto him, Get thee out, and depart hence: for Herod will kill thee. And he said unto them, Go ye, and tell that fox, Behold, I cast out devils, and I do cures to day and to morrow, and the third day I shall be perfected. Nevertheless I must walk to day, and to morrow, and the day following: for it cannot be that a prophet perish out of Jerusalem.