Origin of the “Rule of thumb” phrase

Where does the phrase rule of thumb originate from? Why the thumb, of all possible body parts?

No one knows. The expression has existed in many languages for a long time, which suggests that its origin is pretty old.

There are several theories, some based in the similarities in many languages between the words inch and thumb and how you can measure an inch using the thumb, others based on the general usefulness of the thumb to measure different things.

It's entirely possible that it originally had nothing at all to do with the thumb; that it was a similar word that has become distorted over time, then translated to other languages in its distorted form.

The origin is most likely derived from the use of the thumb as a practical way to measure/estimate different things such as distances or temperatures:

From the Phrase Finder :

The earliest instance unearthed by Gary Martin (Phrasefinder) is in a rhyme found in Augmented with Ingenious Conceites for the Wittie and Merrie Medicines for the Melancholic, published in 1640:

If Hercules tall stature might be guess'd
But by his thumb, the index of the rest,
In due proportion, the best rule that I
Would chuse, to measure Venus beauty by,
Should be her leg and foot:

According to World Wide Word the origin is more likely to derive from measuring distances rather than temperatures:

and also from here:

The Phrase Finder also considers the possible origin that refers to the "legal" rule of beating with a stick one's wife, but not enough reliable evidence has ever been found to support it:

Perhaps it's because the length of the thumb joint to the end of the thumb is a fairly accurate representation of an inch. So rule of thumb was likely a way to quickly verify the measurement before cutting for construction work rather than search for a yard stick. The meaning probably began to be used in a more abstract sense as a rule to quickly validate something.

If you ever do any carpentry you can get pretty close with your thumb as a rule / gauge.

So any measurement not using actual instruments is by "rule of thumb", or "by eye".

Early English Books Online reports three instances of the expression from before 1700. They are as follows.

From John Alexander, Jesuitico-Quakerism Examined, or, A Confutation of the Blasphemous and Unreasonable Principles of the Quakers with a Vindication of the Church of God in Britain, from Their Malicious Clamours, and Slanderous Aspersions (1680):

That the Scriptures are Infallible is sufficiently proved at the Survey of their former Query; where we proved them to be of Divine Inspiration, and the Word of the Living God, and not of any meer Creature, and so they cannot deceive; so that for their Infallibility we need say no more. That therefore the Scriptures are the Rule of Faith and Manners I prove.

This instance suggests that there was a jest involving a "Rule of Thumb" widely enough known in 1680 not to require full retelling to be recognized by the author's audience.

From James Durham, Heaven upon Earth in the Serene Tranquillity and Calm Composure, in the Sweet Peace and Solid Joy of a Good Conscience Sprinkled with the Blood of Jesus and Exercised always to Be Void of Offence Toward God and Toward Men (1685):

Because there is much false bulk, and empty shew of a profession; Which we are afraid, but a very little tryal will quickly evidence, and discover to be so, even to be unsure work; I will not say, but there may be some sickernesse, and solidity in the profession of some, but it is to be feared, that many others are but building castles in the air, castles of come down when the rain shall descend, the winds blow, and the floods beat, having much more shew then substance, and solid work; and the way to make it sicker, sure and solid work, that will abide the tryal, is to lay it to the Rule, and to try it thereby; many profest Christians are like to foolish builders, who build by guess, and by rule of thumb, (as we use to speak) and not by Square and Rule; and if they have but bulk enough, they look not much to the solidity, and straightness of the Fabrick: There are many engadgements come under, many fastings, prayers, hearings of the Word, &c. (which are good in themselves, and commendable) but there would be Self-examination, to see what solidity is in them all; else we will be like the men, who expend all their stock on the stone and timber-work of a large house, and leave nothing to plenish, and furnish it within; whereas, when a person is suitably, and seriously taken up with Self-examination, it maketh a house (to speak so) though it should be lesse, to be well filled and furnished; and albeit there be no great noise of a Profession there, yet there is more kindly Repentance, more seriousnesse in Prayer, and in other Duties, more profiting by hearing of the Word, and more holinesse of Life, then where this exercise of Self-examination, and reflection is either altogether or very much neglected, albeit there should be then, a far greater profession.

This is the instance that Phrase Finder identifies as the earliest occurrence of "rule of thumb" according to user66974's answer.

And from William Hope, The Compleat Fencing-Master in Which Is Fully Described the Whole Guards, Parades & Lessons Belonging to the Small-Sword : As also the Best Rules for Playing Against Either Artists or Ignorants with Blunts or Sharps (1691):

I think you may easily apply this Story to what I was before saying, That a Man may break his Adversaries Measure, and that as often as he thinketh it convenient for his own safety, without being any wayes accounted a Coward. I know very well that those who understand this Art will be of my opinion, because they know that the Judging of Distance exactly is one of the hardest things to be acquired in all the Art of the smal-Sword; and when once it is acquired it is one of the usefulest things, and sheweth a Mans Art as much as any Lesson in it; but I am for no Mans Retiring too much, unless upon a very good Design, and that hardly any Ignorant of this Art can have, because what he doth (as the common Proverb is) he doth by rule of Thumb, and not by Art.

This example is interesting because it describes doing something "by rule of Thumb and not by Art" as a proverb. Nevertheless, the earliest instance I've been able to find of of "rule of thumb" treated as a proverb is in James Kelly, A Complete Collection of Scotish Proverbs: Explained and Made Intelligible to the English (1721):

No Rule so good as Rule of Thumb, if it hit.

[Comment:] But it seldom hits! Spoken when a Thing falls out to be right, which we did at a Venture.

At least in its early Scottish incarnation, the "rule of thumb" appears to have been an acknowledgment of lucky guesswork.

The phrase "rule of thumb" in the sense of "appraisal by guess or (perhaps) by reference to personal experience" was in use in England by 1680 and, more particularly, was associated by that date with an unidentified jest about such guesses. Authors in the 1680s present this source of appraisal or measurement in unflattering contrast to the objective and more fundamentally sound rule of Scripture or of "Square and Rule." A subsequent instance of the expression from 1691 contrasts "rule of Thumb" with "Art."

Finally, in Scotland by 1721 "rule of thumb" seems to have been used in connection with guesswork that came out well, in a formulation that acknowledged the overall unreliability of such guesswork.

Not sure if it helps, but this expression reminds me of basic Physics lessons in secondary school: Fleming's "rule of thumb"/right hand rule (similar Oersted's rule in the wiki article posted by Guffa) 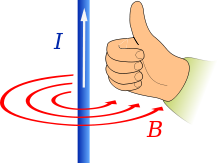 Rule of thumb A very old sailor (sailing ships,I am now 72 years old) I knew as a kid always said rule of thumb was a quick system of measurement on sea charts .... a thumb’s width on any chart, regardless of scale, assured a “safe” or heaithy distance off shore. Padken

Rule of Thumb is an undocumented, implied rule to abide.

One possible origin, or at least implementation, is found in the 117th New Constitution of Roman Emperor Justinian I, published in 529 C.E., granting a husband freedom to "beat his wife with a whip or rod" for divorcable offenses. The "rule of thumb" was possibly conjured to suppress nefarious abuse of the law. This rule has never been documented, as it is merely a guideline, to help prevent serious injury.

An example rule of thumb is: "Slice a peach along its suture, to remove the pit." There's no harm in bisecting the fruit along any other geodesic. It's simply easiest to remove the pit when bisected in a specific manner. It's also a good rule to not call the suture of the peach its "butt crack" (or worse), as this will likely result in a negative impact to social status among your peers.

The failures of man to abide by rules of thumb resulted in the invention of posting warning signs for the most unlikely and oddly specific circumstances.

As @NathanCTresh highlighted in his comment, the rule of thumb is indeed an oral tradition. Because this is rule passed on in oral tradition, the term is spoken in modern English ("rule of thumb"), and not in Latin ("pollux regula").