Is there a single word to describe a solution that hasn't been optimized?

I am working with some code, and I would like to describe the difference in its performance when it is optimized versus when it is not optimized. Unfortunately, I can't find a word to describe the code before it is optimized; "sub-optimal" might work, but I want to emphasize that this is the first iteration of the code. If "unoptimized" were a word, I would use that, but I haven't found any references to it in any dictionary.

single-word-requests nouns
Share
Improve this question
asked May 15 '15 at 14:07

Unoptimized is the term most often used in the field of computing to refer to a program that has not been optimized, in your case to the output of the compiler when it has been instructed to not perform optimizations - as you clarified in the comments as a response to my question. Using unoptimized will be unambiguous to the reader regardless of level of expertise. The term is not listed in Oxford English Dictionaries - but it is precisely through usage that new words are included - so this should not keep you from using it. Incidentally, I have submitted to the Oxford Dictionaries team a link to this question for their consideration. Update: OED added unoptimized in June 2018.

The Google database of patents shows 268 patents that use the terms code, compiler, and unoptimized.

As evidence of the de facto use of "unoptimized" to refer to machine code that has not been optimized I submit the following example, Hewlett-Packard patent US6202205

SUMMARY OF THE INVENTION

A Google ngram chart shows the rising usage of the term unoptimized, beginning in the 1960's, coinciding with the rise in computer programming. 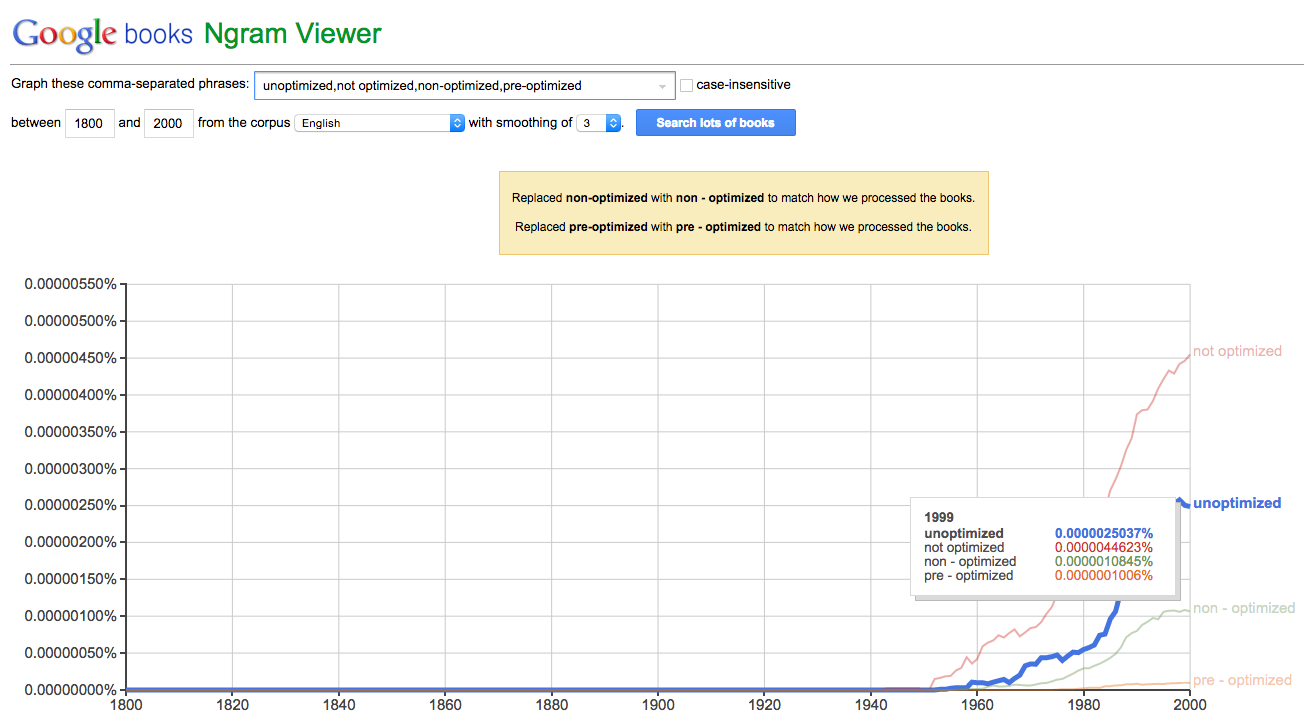 The word code has different meanings, even within the field of computing, see Wikipedia: Code(disambiguation). In your question, code might be interpreted as one of two things:

The optimization of code is therefore also ambiguous, as it might refer to

By your answers to questions in the comments we have determined that you are after a term that describes the version of the program generated by a compiler when it has been told to not perform optimizations. This is known by programmers as either the "debug version" or the "unoptimized version."

The description of the optimization levels that can be requested in the well known GCC compiler is instructive, and uses the term you suggested, "unoptimized"

Without any optimization option, the compiler's goal is to reduce the cost of compilation and to make debugging produce the expected results. Statements are independent: if you stop the program with a breakpoint between statements, you can then assign a new value to any variable or change the program counter to any other statement in the subprogram and get exactly the results you would expect from the source code.

Turning on optimization makes the compiler attempt to improve the performance and/or code size at the expense of compilation time and possibly the ability to debug the program.

The default is optimization off. This results in the fastest compile times, but GNAT makes absolutely no attempt to optimize, and the generated programs are considerably larger and slower than when optimization is enabled.

Speaking as a professional programmer, I would say "unoptimized," even though it is not a dictionary term, is sufficiently conducive of your meaning, especially to other programmers. Furthermore, it is a term I personally use on a regular basis.

Despite its non-word status, even to the non-technical person (e.g. a client or a high-level executive), the general meaning of the term is immediately intuitive.

If you are bent on using a single word here draft is the first one that comes to my mind. According to Merriam-Webster:

5 a : delineation, representation
b : scheme, design
c : a preliminary sketch, outline, or version

Otherwise I think the suggestions made by @Othya are quite fitting:

All the more when considering a software related environment.
Seeing as you are talking about code the difference between optimized and non-optimized code may very well be a different algorithm so picking out an easy-to-spot feature of the different algorithms as namesakes might be another approach. As an example consider Insertion-Sort versus Merge-Sort.

It conveys that it is unfinished or unrefined, without attacking it by referring to it as a hack, or venturing off-industry to use words such as draft.

Prototype can (in some situations) connote that the product is still missing features or design assets, so if you want to make it clear that these are not the case, you can manage these expectations by saying, working prototype or even final prototype - but if you don't, all you really risk is impressing people with how complete the product appears.

{Note however that, conversely, in other situations, "prototype" means precisely a very rough yet finished version which, specifically, contains every single feature which will be present in the final product. Then again, in certain milieu, prototype means very specifically: the first hand-produced item which is precisely and totally exactly as the final product should be, representing the final quality and finish of the product for sale, once the final product comes off a production line.}

alpha and beta are also good words for early, functioning-but-not-final versions of code in progress, but these refer more to a project-in-whole (or a version thereof), while a prototype can refer to a single feature.

How about the initial version of the code?

I usually hear the initial implementation of a piece of software referred to as version zero, but I have heard initial version used often as well.

Since you should not be optimizing code without first profiling it, the term you should use on code that has unknown performance issues is unprofiled.

I'm a little out of my depth here, in terms of the names of parts of speech, but "optimized", when used as an adjective, is apparently known as a deverbal adjective. And, according to that reference, deverbal adjectives may be modified with ordinary prefixes, such as "un".

'First pass' could refer to an initial attempt. It doesn't have the 'not finalised or released officially' connotations of draft or beta.

I also think that these days 'v1.0' is acquiring a general using meaning 'first attempt before refinement' beyond its strict software definition.

You might consider referring to the original solution to a problem as a hack, call it hackish, or say that it was hacked together, especially if the solution is rough. It's not uncommon for robust, optimized code solutions to evolve from humbly hackish beginnings.

This wouldn't work if your initial, non-optimal solution is well-formed and carefully crafted. I'd also hesitate to use this term in professional documentation or in communications with anyone outside of your developer peer group (e.g. bosses, customers). In these scenarios, I'd stick to the other answers provided here.

More context would help. I'm a software engineer, non-optimised code is just called non-optimised. An inelegant algorithm might be brute force or you might just describe a first stab at some code as crude, clunky or ugly.

There is an idiom in general usage (at least in the US), "quick and dirty," which means something that was expedient and easily done but is not of the best quality. In the software business this phrase is often used to describe code that was written with the goal of getting something that "works" as soon as possible, without any attempt to optimize it (or, usually, to do many of the other things that would make a piece of software viable in the long run).

This is especially applicable to the first version of a piece of software. So if you want to emphasize that the code you are working with is only in its first iteration, and there has not been time yet to optimize it, you could call it quick and dirty code.

3
What adjective would mean “both former and still present”, but not “original”?
3
Is there a word to describe something that's perceived to be funny or clever only because it makes a reference that appeals to a certain group?
12
What is a word or phrase that means “cut off from the outdoors”?
14
Word for something that is too idealistic and dangerous to pursue?
4
Is there a word that means to see something but not be able to describe?
3
Mondegreens for normal speech - is there a specific word for them?