Is there a word for lying on the bed peacefully, all your muscles relaxed?

Is there a word or an idiom for lying on the bed peacefully and happy? Throwing yourself down on bed arms wide open, all your muscles relaxed and staring at the ceiling with a happy smile like something you dreamed of has just happened. Is there an idiom to narrow this situation?

There are a few terms which specifically capture the physical state of lying on the ground, face up, but they're fairly clinical and lack the mental overtones you describe (of complete relaxation, etc).

Which I like because its spelling reminds me of "supple" (relaxed, like a loose, floppy noodle). And there's also:

Recumbent: (especially of a person or human figure) lying down.
[google definition]

Which I like because it has hints of "recline" and "slumber".

Now, there are a couple of other words which are often used to mean lying on one's back, but in a strict technical sense, they actually mean lying face down:

Prostrate: lying stretched out on the ground with one's face downward
[google definition]

As a verb, prostrate¹ often carries an active connotation of laying face down in reverence or submission.

A more passive synonym, often used of the unconscious (e.g. boxers who have been knocked out) and corpses is:

This is the difference: 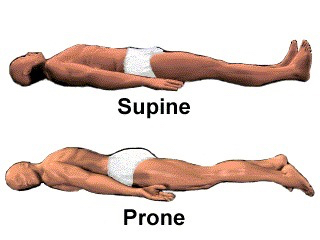 You'll notice that none of these words explicitly describe one's arms and legs being outstretched. Now, if you truly need to capture that physical arrangement, you can use:

spread-eagle: stretched out with one's arms and legs extended.

"prisoners are chained to their beds, spread-eagle, for days at a time"
[google definition]

But I strongly recommend you avoid that term.

If the actual physical arrangement of your body is less important than the mental state of relaxation you're trying to convey, then you can use my personal favorite word from this particular constellation²:

But again, that lacks the explicit physical state of laying flat on the floor.

So, if you need to capture both the physical and mental states, you can say something like "I was relaxing on the floor", or "I was just floating there" (metaphorically invoking the image of floating on water), or, heck, "I was so relaxed, I just gave myself up to gravity".

¹ Don't confuse prostrate and prostate (with only one r), please.

² Why do I like this particular word? Because I once read a wonderful short story about a living car, and one line the admiring narrator used to describe it was something like "*That car didn't park, it reposed.". Sadly, that's all I can remember of the story; its title is lost to me forever.

You could use tranquil

or its synonym, serene

(in) a state of rest, sleep, or tranquility:

Though I must admit, neither of these are applied exclusively to describe lying on bed.

How about something based on the intransitive verb "loll?"

Not the answer you're looking for? Browse other questions tagged word-choice single-word-requests phrases expressions idioms or ask your own question.

3
Request for an idiom (if any) or an expression that describes the following phenomenon
5
A single idiom or phrase that means “ I didn't feel sleepy anymore”
23
Is there a word for telling someone all your thoughts?
16
More formal word for “know-it-all”
0
Word for “the moment when you feel happy but deep down you are so scared to express that”?
3
Single Word Request: Relationship based on context
5
“… for all the yolk in your eggs.”
3
Is there an idiom or expression for that “squeezing sensation you feel in your chest” when you contemplate one you love
31
Sleepy tired vs physically tired