A word/phrase for "being extremely happy and jumping gladly"

Suppose if someone is extremely happy like a child and starts jumping gladly, what words/phrase best describe this situation, such that the following sentence can be completed.

There are a few words like, "euphoric", "deliriously happy", but I am not quite sure if these words also include the "jumping gladly" part of my question.

Is there a better word or using "jumping gladly" is just fine.

single-word-requests expressions phrase-requests
Share
Improve this question
edited May 9, 2015 at 8:13

I think you are looking for :

The expression can refer both to physical and metaphorical Joyful jumps. 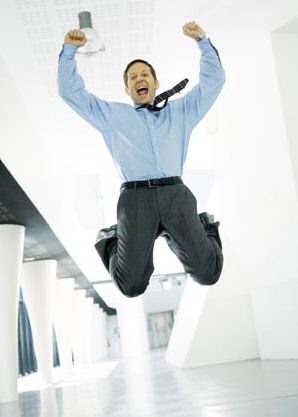 A word that fits the bill pretty perfectly is giddy. This word is used to describe childishly obnoxious joy. A giddy person is pretty much always smiling, usually giggling or laughing, and typically dancing and/or jumping, bouncing, or otherwise being energetic.

Exult has the denotation of joy:

[NO OBJECT]
Show or feel triumphant elation or jubilation:

It contains the connotation of leap:

1560s, "to leap up;" 1590s, "to rejoice, triumph,"
from Middle French exulter,
from Latin exultare/exsultare "rejoice exceedingly, revel, vaunt, boast;"
literally "leap about, leap up,"
frequentative of exsilire "to leap up,"
from ex- "out" (see ex-) + salire "to leap" (see salient (adj.)).
The notion is of leaping or dancing for joy. Related: Exulted; exulting.

She was exulting in her victory

It might take a bit of imagining on the part of the reader, but the following suggestion might evoke the idea of "jumping gladly" that you want:

She was over the moon.

(The link is not to a well-established dictionary, I'm afraid.)

If you really want to describe someone who is actually jumping up and down gladly, you can say:

He/she was literally jumping for joy..

(To improve on Josh's answer)

and can be used in situations where one is happy but standing still. According to the definition, physically jumping isn't implied. That's why this is one place where literally could come in handy to mean literally, not figuratively.

He was “skipping with unbridled exuberance”

You could use the word "ebullient" for the cheerful part.

Depending on which dictionary you use, the origin seems to come from 'boiling up' -- a bit of a stretch to equate it with jumping, but it might work for what you need it for.

You are looking for the word "Ecstasy" and can be described as below.

If you’ve ever been so happy that the rest of the world seemed to disappear, you’ve felt ecstasy — a feeling or state of intensely beautiful bliss.

In your sample question.He was screaming in ecstasy.

Read more about this www.vocabulary.com.

FULL OF PISS AND VINEGAR... To say that people are “full of piss and vinegar” is to say that they are brimming with energy. Although many speakers assume the phrase must have a negative connotation, this expression is more often used as a compliment, “vinegar” being an old slang term for enthusiastic energy.

Phrasefinder.org: 'Full of piss and vinegar'

The earliest citation I've found is from 1936 in John Steinbeck's novel In Dubious Battle:

"Listen, mister," London said, "them guys is so full of piss and vinegar they'll skin you if you show that slick suit outside."

Steinbeck was clearly pleased with the phrase (although it is unlikely that he coined it himself) and repeated the use of it 1938 in his better known novel The Grapes of Wrath:

Grampa walked up and slapped Tom on the chest, and his eyes grinned with affection and pride. "How are ya, Tommy?"

The best single-word answer would be gamboling.

to skip about, as in dancing or playing; frolic.

3
Word for a person that is both caring and cold-hearted logical
0
Word request for "one's inablity to understand his/her duty/obligation"
2
Adjective for not knowing any better
1
Word for "Trying to confuse people with Scientific and technical jargon"
2
Term for different types of race: racing by turns and racing together
0
Find a word for 3rd person interference in telephone call
0
How to describe in a resume that a person left college because of the age limit for immigration?