How did the archaic 'villein' transform into villain?

The word villain, as described by Google, comes form the archaic word villein. 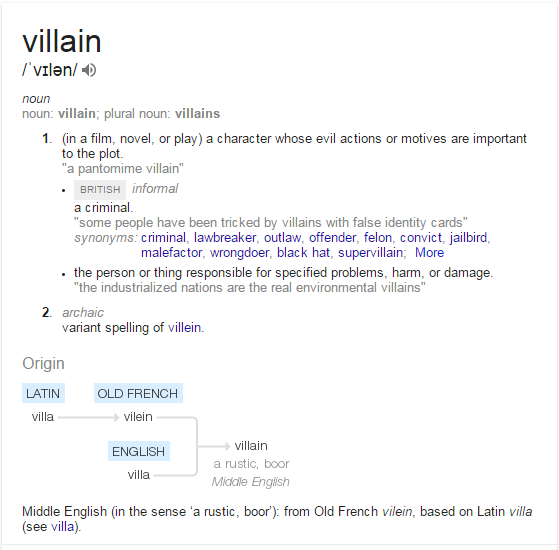 Here is the definition of villein:

villein
ˈvɪlən,-eɪn
noun
(in medieval England) a feudal tenant entirely subject to a lord or manor to whom he paid dues and services in return for land.

I presume than the Latin meant a slave/worker in the villa (which would have been the equivalent to manor).

The current usage of villain has connotations of someone who has money or power already. In that light, it feels like the subject of the word has flipped from the tenant to the to lord.

How did this transformation of meaning come to pass?

meaning historical-change
Share
Improve this question
edited May 8, 2015 at 0:02

How did the archaic 'villein' transform into villain?

This is the process of semantic change called degeneration or pejoration:

Dictionary.com Unabridged Based on the Random House Dictionary

The entry for villain confirms this degeneration process:

c. 1300 (late 12c. as a surname), "base or low-born rustic,"
from Anglo-French and Old French vilain "peasant, farmer, commoner, churl, yokel" (12c.),
from Medieval Latin villanus "farmhand,"
from Latin villa "country house, farm" (see villa).
The most important phases of the sense development of this word may be summed up as follows: 'inhabitant of a farm; peasant; churl, boor; clown; miser; knave, scoundrel.'
Today both Fr. vilain and Eng. villain are used only in a pejorative sense. [Klein]

Another example of pejoration is knave:

Often words associated with things that are lower on the subjective "nobility scale" deteriorate into more and more ignoble meanings. The feudal tenants were essentially slaves, and this word, which was associated with them, became increasingly ignoble over time, until it reached evil criminal.

Perhaps the currently popular tenets of socialism have begun to strike back on behalf of the peasants by labeling the rich and powerful as the villain. That would be a reasonable connotation, but it has not necessarily "flipped" the definition.

Our generation has experienced this process of degeneration recently in the expression jones:

A fixation on or compulsive desire for someone or something, typically a drug; an addiction:
a two-year amphetamine jones verb

[NO OBJECT] (jones on/for)
Have a fixation on; be addicted to:
Palmer was jonesing for some coke again

1960s: said to come from Jones Alley, in Manhattan, associated with drug addicts.

Jones Alley is a small dead end street in the middle of NoHo, a curently upscale neighborhood in Manhattan. The neighborhood flourished from its establishment in the 1820s until its first peak in the 1910s, then it declined through the 1960s. At the neighborhood's nadir, Jones Alley was supposedly a convenient lair for drug dealers, and one of the many nicknames of heroin was jones:

surname, literally "John's (child);" see John.
Phrase keep up with the Joneses (1913, American English) is from the title of a comic strip by Arthur R. Momand.
The slang sense "intense desire, addiction" (1968) probably arose from earlier use of Jones as a synonym for "heroin," presumably from the proper name, but the connection, if any, is obscure. Related: Jonesing.

Although the details of this etymology are not 100% certain, our relatively recent cultural experience with addiction can help us visualize the linguistic process of pejoration toward the end of the word's development:

Wikipedia notes that the French and Italian cognates simply mean e.g. naughty, rude, or ill-mannered, rather than the malicious evil it refers to in English. This suggests a transitional state, where it went from describing people of actual low social class, to describing behavior that was seen as "low-class", and with that negativity having taken root, was further expanded to refer to actual evil actions.

There was also a historical belief until only a few centuries ago that people of high social classes were also of inherently better moral fiber than those of the lower classes - the converse can be seen in, for example, the modern meaning of words like "noble".

Not the answer you're looking for? Browse other questions tagged meaning historical-change or ask your own question.

10
how did the epithet "nigger" come into usage?
8
When did a mother giving birth become the deliverer instead of the deliveree?
2
How did "ass" lose the 'r'?
7
When did the word bully pivot?
8
How did 'flapper' evolve from a derogatory term into a cultural identity?
4
Does the archaic prefix wer/wep have modern descendants?
13
How did a "ton" come to mean "one hundred" of something?
10
When and where did 'bulldozer' originate, what did it originally apply to, and how did it come to refer to earth-moving machinery?