How is the past tense of “error” spelt in British English? [duplicate]

How is the past tense of "error" spelt in British English?

Wiktionary says that it's "errored", but its entry for errored doesn't explicitly say it's valid for British English, and I thought it'd get another "r" compared to American English.

This question is not a duplicate of Is "errored" correct usage? , because this is asking about spelling, and the other question is about whether using "error" as a verb is "correct" from a prescriptivist perspective.

According to oxford, error isn't a verb.

Err is, and here are its forms: 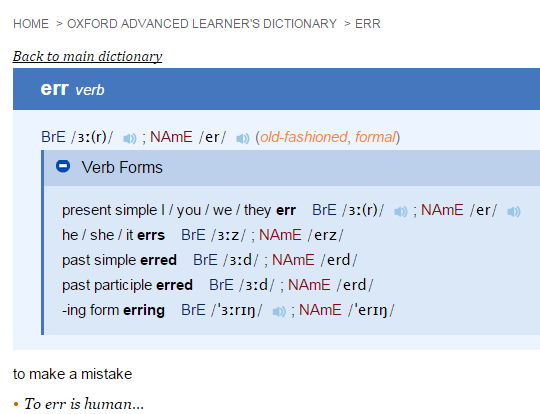 Not to knock wiktionary, but I wouldn't consider errored a verb form. Note that the entry doesn't cite any examples for this sense. Its examples as an adjective seem passable, though, especially in a technical sense.

The mean number of errored bits per errored symbol is therefore...

The entry for error (v) in OED has not been updated since 1891. As such, it's unlikely to include modern usages which arise from computing. Even the Oxford Dictionary of Computing is now six years old, which is rather a long time in the field.

Error is used as a verb. It's jargon, and means "produce an error message" or "fail with an error condition" or some such similar event.

Because it's computing jargon, it would probably sound out of place when used in other circumstances. It would be incorrect to say that I had errored in constructing this answer.

Computing jargon is generally spelled with American spellings, even in British English. Program and its derivatives are the obvious examples; many languages' verbs are spelled with a -z- spelling (like Oracle's ANALYZE function). Consequently, even if British English doubled the consonant for errorred it would be unlikely to persist.

In fact, there are rules for the doubling of consonants in English [see another ELU question]. There may be exceptions to those rules, but

Not the answer you're looking for? Browse other questions tagged british-english orthography programming doubled-consonants or ask your own question.

60
Is “errored” correct usage?
43
“Focussed” or “focused”? Rules for doubling the last consonant when adding -ed

6
Are there any pairs of words like “beloved”/“belovèd”, “learned”/“learnèd” that maintain a semantic difference to the present day?
8
Should “glamourous” be considered incorrect?
19
Why is “fulfil” spelt as “fulfill” in American English?
3
“Now that x, y,” vs. “Now x, y” (“Now” in dependent clauses): British vs. American English
17
Is “targetted” a standard British English spelling?
5
Are these mispronunciations by my British English text-to-speech engine a reflection of an actual British English usage?
1
How to pronounce furore/furor?
1
'Histogramed' or 'histogrammed'?
3
Van Gogh goes or Van Gogh coughs? Is there a commonly accepted British English pronunciation?