Where does the phrase "get crackin'" come from?

"There's a lot of work to be done, so we'd better get crackin'"

I've often used this expression, but I have no idea what we might have been cracking, originally? Any insight?

Dictionary coverage of 'get cracking'

J.E. Lighter, Random House Historical Dictionary of American Slang (1994) reports that "get cracking" came into U.S. English from the UK during the 1940s:

get cracking to get busy; get going. {This phr[ase] came into U.S. speech through contact with British armed forces during WWII.}

Lighter's first citation for the phrase is from Eric Partridge, Dictionary of Slang and Unconventional English (1936), as "Get cracking, begin work."

It appears to have caught on as a naturalized phrase fairly quickly, however, since it appears in Harold Wentworth & Stuart Flexner, Dictionary of American Slang, first edition (1960):

cracking, get Start; start moving; begin working; begin to exert oneself. Often in the phrase let's get cracking.

The entry for "get cracking" in the original edition of Eric Partridge, Dictionary of Slang and Unconventional English (1936) is actually a bit more detailed than Lighter's citation suggests:

Earlier in the same dictionary, Partridge has this entry for cracking as an adjective:

By the fifth edition (1961) of the dictionary, however, Partridge had evidently rethought the place of "get cracking" in the larger scheme of similar phrases and had adopted the entry that ghoppe reports in a different answer here, with the suggestion that it might have its origin in "whip-cracking at the mustering of cattle."

Google Search results generally support Partridge's1936 reading of the phrase. The earliest relevant matches are from 1938, and one of them is RAF-specific. From Popular Flying, volume 6, issue 9 (1938) [combined snippets]:

We've got a new vocabulary in Black Bourton, the vocabulary of the R.A.F. Nice things are "wizard"; nasty people are "ropey types," and a reckless man is "split." One is "browned off" when one is rather depressed; the ground is the "deck" and the sky is the "ceiling"; dull-witted people are "drips," and when in a hurry we ask each other to get "cracking." This strange lingo is, of course, subject to changes and ex-R.A.F. men of several years ago would find themselves hopelessly dated by the expressions they use.

There is, however, one outlying instance of "got cracking"—or more precisely "got cracking away"—that might be significant as well. From Bertram Milford, In the Whirl of the Rising (1904), a novel seemingly set in Rhodesia during the Second Matabele War, of 1896–1897:

"You must have had the very devil of a scrap, Peters." one of these [horsemen from Green's Scouts, a relieving force] was saying. "We could hear you banging away from the time you began, and pushed our gees for all they'd carry; for we reckoned all that shooting meant a big thing and no bally skirmish. ... They [the Matabele forces] didn't know we were there till we got cracking away right in their faces, or mostly backs. Magtig! Didn't they skip. ..."

Here it seems pretty clear that "got cracking away" means "started firing our guns." Is this usage connected to the later World War II use of "get cracking"? It's difficult to say. If there is a connection, the literal slang term for gunfire would have to have transmuted into a more figurative sense of getting started. Still, both usages have a strong tie to military usage, and a connection is not impossible.

No reference work has convincingly tracked "get cracking" to its original lair. The term does seem to be of UK English origin, but whether it originated in the RAF in 1925, or in Rhodesia in the late 1890s, or in some bucolic setting to the sound of bullwhips bring cattle into order for transportation or migration remains unclear.

I always though this was related to the cracking of a whip; either to make a horse run faster or to drive cattle etc.

I think the precise origin will probably always be shrouded in mystery, but this Ngrams graph implies it derives from the earlier British usage Crack on.

I realise Ngrams will have included many spurious occurrences of both phrases (for example, references to a crack on a surface). But this 1764 usage is obviously idiomatic, so we can safely say Crack on was current by then. I can't find any explicit use of Get cracking until at least a hundred years later.

I suggest the basic metaphor being invoked is that in many contexts, a crack is the first stage of a wider split; starting a major task might imply you need to make a small dent or crack in it first. Also, of course, you can't make an omelette without breaking (cracking) eggs.

Get cracking may have originally been not much more than get to talking as seen in this clip from Passages in the Life of Mrs. Margaret Maitland, 1849 (check) 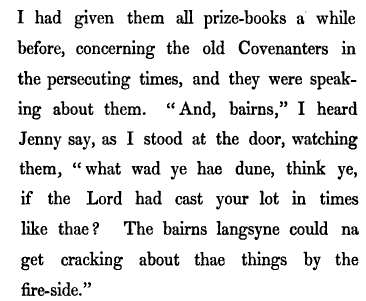 With John Boag's 1848 Popular and Complete English Dictionary having one definition of cracking to be "conversing familiarly," the last sentence of the above clip can be translated, "The children of that time couldn't have sat chatting about this around the fire."

This use of cracking is related to the phrase to crack a joke, but I'm not sure it's related to the "get to work" meaning of get cracking. Just thought this early appearance was interesting. For more theories on the modern meaning check out the thread on the phrase at Wordwizard.

After looking at the earliest google n-grams of usage of the phrase, (discounting the 1849 passage which clearly uses "cracking" in the sense of talking/gossiping/boasting) I had a hunch it had its origins in military jargon. A little more searching found this:

According to the Dictionary of Slang and Unconventional English:

get cracking-get mobile-get skates on-get stuck into it-get weaving. To respond (immediately to an order; to get a move on; Services’ (the 2nd, 3rd, 4th, general; the 1st orig. Army and then gen.; the 5th, RAF—see separately at weaving): since ca. 1925, except stuck (ca. 1916) and the last q.v. All usu. in the imperative. Origins: whip-cracking at the mustering of cattle; …

It is a Crypt gang term to shoot to kill. Hip hop has made it popular because of their appeal to gangs. They inside lingo makes them secretly laugh at the ignorance of those using it in our culture so prominently today. I am a former teacher in a juvenile correctional facility and this came out in our gang training.

MarieMarie
1
1
Add a comment  |
Highly active question. Earn 10 reputation (not counting the association bonus) in order to answer this question. The reputation requirement helps protect this question from spam and non-answer activity.

Not the answer you're looking for? Browse other questions tagged etymology expressions history or ask your own question.

6
Why and when did "crack" come to mean "tell"?
1
Alternative phrase for "crack the whip"