A single word for a secluded garden surrounded by a wall

Can anybody give me a single word for a secluded garden surrounded by a wall?

A walled garden is specifically a garden enclosed by high walls for horticultural rather than security purposes, though traditionally all gardens have been hedged about or walled for protection from animal or human intruders. Garden walls may also serve a decorative purpose, but their essential function in the north temperate zone has been to shelter the garden from wind and frost.

Curiously, the literal meaning of the word "paradise" IS "walled garden" but it has long since lost that meaning

The word "paradise" entered English from the French paradis, inherited from the Latin paradisus, from Greek parádeisos (παράδεισος), and ultimately from an Old Iranian root, attested in Avestan as pairi.daêza-. The literal meaning of this Eastern Old Iranian language word is "walled (enclosure)",from pairi- "around" + -diz "to create, make". The word is not attested in other Old Iranian languages (these may however be hypothetically reconstructed, for example as Old Persian *paridayda-).

Maybe you can also use hortus conclosus

Hortus conclusus is a Latin term, meaning literally "enclosed garden". "The word 'garden' is at root the same as the word 'yard'. It means an enclosure", observed Derek Clifford, at the outset of a series of essays on garden design, in which he skirted the conventions of the hortus conclusus.1 Thus, at their root, both of the words in hortus conclusus refer linguistically to enclosure.

Pleasance seems to fit the bill quite nicely. -- ODO

(noun) A secluded enclosure or part of a garden, especially one attached to a large house.

(noun) a court open to the sky, especially one enclosed on all four sides.

What came to mind are the ancient Roman homes where the second half of the house is surrounded by a peristyle. The use of the word peristyle would be specific to a colonnade with a covered walkway and may not always contain a garden. However, I have seen peristyle garden and peristyle courtyard as alternatives. There is also a cloister, the medieval equivalent.

Secret garden is another possibility.

Maybe not quite the same, but a "cloister" is a courtyard or garden surrounded by a covered walkway. Here is one example. 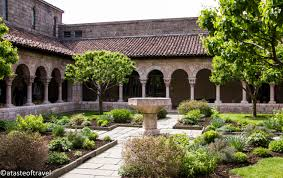 (noun) 1. A pleasant shady place under trees or climbing plants in a garden or wood.

Perhaps you could try plantiecrub, although this source here suggests it would be for growing cabbage.

1
“Things which are hung/mounted on wall” in a single word?
3
A single word meaning to abide in a place for a long time
6
A single word for a person who suffers great loss
3
A single word for labelling someone a disbeliever in a particular religion despite them adhering to it
8
A single word antonym of “absorb”
0
What is the name for the wall around the land
2
Is there a word to describe a piece of land surrounded by river(s)?
0
Door-to-Wall Relationship Words
0
Single word for “give custody”: to custode?