What word describes a person who acts like a goody-good because they fear repercussion from authority?

Is there a word in English that describes the behavior of someone who realizes they are being monitored by some authority or supervisor, and as such, are acting on "their best behavior"? For instance, a school yard bully might act like a sweet, innocent child and treat other children with kindness if she knows that the teacher is watching.

I'm looking for a word that describes this type of phony "goody-two-shoes" type behavior. Sanctimonious and pious are close, but both imply that the portrayer considers herself to be morally superior, which doesn't fit this scenario. Insincere is spot on (its fake/feigned behavior), but is too generalized and doesn't apply specifically to the above scenario where an actor is pretending to be a goody-two-shoes because they fear repercussion from some authority.

Another example: I might pretend to be working diligently if I know my boss is watching me closely, but the minute he goes on vacation I slack off and stop working.

Merriam-Webster defines the adjective UNCTUOUS as used to describe someone who speaks and behaves in a way that is meant to seem friendly and polite but that is unpleasant because it is obviously not sincere unctuous. The poster child of an unctuous personality in “classic” American television (for those of us old enough to remember) was a character named Eddie Haskell (played to great effect by the actor, Ken Osmond) on “Leave It To Beaver” which ran on CBS from October 4, 1957, to 1958 and then on ABC from 1958 to 1963. The Beav’s dad, Ward Cleaver, once described Eddie as “so polite, it's almost un-American." The “mask" of an “unctuous" persona is worn to both avoid what is undesirable and to access what is desirable. 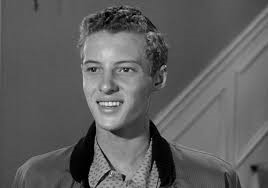 a person who acts obsequiously toward someone important in order to gain advantage.

a person who conforms to accepted behaviour or established practices.

I like "brown-noser". Its slang but hits the nail right on the head...

Reactivity can describe this behaviour in psychology.

Reactivity is a phenomenon that occurs when individuals alter their performance or behavior due to the awareness that they are being observed.

Reactivity is not limited to changes in behaviour in relation to being merely observed; it can also refer to situations where individuals alter their behavior to conform to the expectations of the observer.

The person you describe is actually a psychopath or sociopath. It's part of their manipulation armoury. They bamboozle the gullible and even the astute. They are clever at it because they have no shame or guilt.

If you're looking for an adjective, one possibility is obedient.

The type of behavior you describe sounds like something from Orwell's famous novel 1984, and the characters in that novel were very fearful and obedient.

Another borderline possibility (albeit a noun) is sheeple. In political circles, the word sheeple commonly describes people who are apathetic, clueless and obedient. In fact, some may be so clueless that they don't even realize they're being monitored, which would rule out this term. But in the broadest sense of the term, I think sheeple can also describe people who have been beaten into submission, including people who know they are being monitored.

You suggested yet another possibility - slacker. A slacker is a person who doesn't carry his or her weight. But such a person may work harder if they know they're being monitored.

I think the best answer offered so far (by bearvarine) may be brown-noser, though I'm not sure if it's an exact match for your request.

Such a person is a toady.

toady /ˈtəʊdi/
n a person who behaves obsequiously to someone important.

This term is primarily about putting up with mistreatment rather than seeking favour.

It's also a verb, you can describe somebody as toadying: the man is a toadying little parasite

The word I was looking for is snaperly:

It is a single word that implies there's nothing to see here, carry on!

Snaperly! Who's coming with me!

1
Word for someone who hates getting in trouble