Why is "a couple of <things>" often shortened to "a couple <things>"?

I would write a couple of . I often read/hear a couple .

I assumed this was an American English thing (I'm British), and just a convenient shortening of the phrase for speaking. It's easier to say a couple minutes vs a couple of minutes.

On a side note, this doesn't seem to restrict the number of things to two, but just a small amount–less than a few, in my mind.

The Linguist List thread that @cori linked to has a couple discussions of what’s going on here. For example, one commenter says:

couple is coming into the English list of indefinite numbers, just below few. … If couple with this meaning is new in the language, I suspect that it is picking up the grammar of the semantically adjacent word few.

I did a search in the Corpus of Historical American English for A COUPLE OF [N*] and for A COUPLE [N*], to search for incidences of these two idioms ([N*] means some kind of noun). 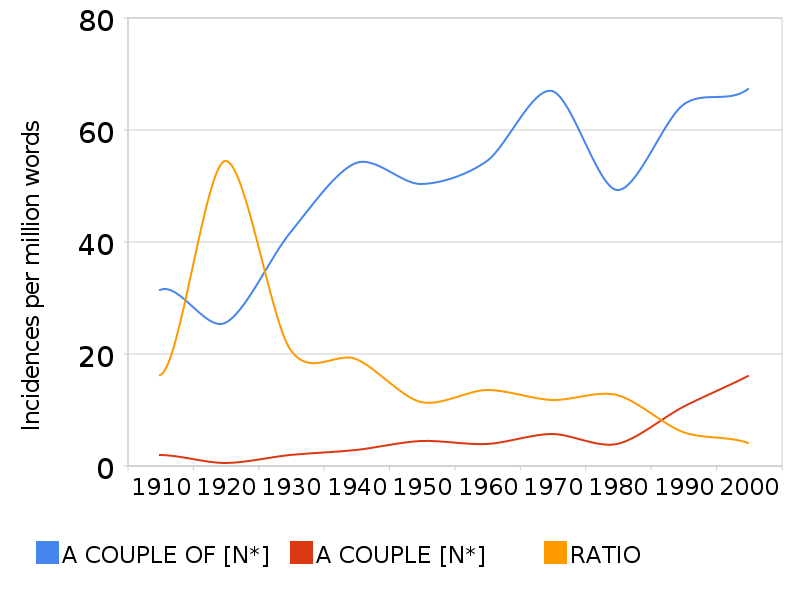 From these results, we see that A COUPLE OF is much more common than A COUPLE, although it should be noted that there are incidences of A COUPLE [N*] dating all the way back to 1820 in the corpus. Interestingly, both terms have been on the rise throughout the twentieth century, and the ratio between them has been decreasing, meaning that A COUPLE [N*] is becoming relatively more common.

I hear both more or less interchangeably here in the US Midwest, and recall that to be the case in the US Appalachian Region where I grew up.

Personally I wouldn't use the abbreviated version in any sort of formal context, but in daily speech I use both.

Here's an interesting thread regarding possibly origins of the difference.

I think what we often hear and what may not show up well in a corpus is "coupla".

Not the answer you're looking for? Browse other questions tagged word-choice differences american-english british-english or ask your own question.

11
Ambiguous connotation of "just" - How do natives interpret these?
0
Is the English-speaking Internet community moving towards Americanized spelling?
9
Can you hear the difference between 'Writer' and 'Rider'? Why?
6
Are these mispronunciations by my British English text-to-speech engine a reflection of an actual British English usage?
15
Where does the term "Flashlight" come from?
5
Is the word 'gratuitous' different in British and American english?
0
"possessive of" or "possessive towards"?
1
Pronunciation of short-lived to rhyme with short-dived. Are there any identifiable factors for this pronunciation?