How do you describe the 'darker side' of someone? Context given here

Context: Foster child learns to manipulate people to make them love her. She meets a kind mother for once, and she doesn't need to revert to her 'psychopathic' (for lack of a better word) side. I am thinking 'alter ego'.

You may use pathological:

or also refer to dark side of her personality.

An evocative term for what OP seeks to describe is “the Shadow.” In the psychology of C.G. Jung (aka, Analytical Psychology), the shadow or "shadow aspect" of the Self may refer to (1) an unconscious aspect of the personality which the conscious ego does not identify in itself. Because one tends to reject or remain ignorant of the least desirable aspects of one's personality, the shadow is largely negative, or (2) the entirety of the unconscious, i.e., everything of which a person is not fully conscious. There are, however, positive aspects which may also remain hidden in one's shadow (especially in people with low self-esteem). Wikipedia The Shadow

Robert Louis Stevenson’s story of Dr. Jeckyl and Mr. Hyde is the symbolic story of a person and their Shadow. The Shadow refers to everything that has been repressed and embodies all of life that has not been allowed expression. Robert Johnson calls the shadow, "our psychic twin that follows us like a mirror image." 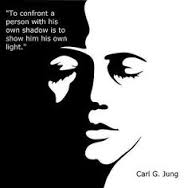 She would not revert to her "neurotic personality" or "neurotic behavior" (if you're looking for clinical terminology).

Other than 'Darker' you may use:

Or even 'Manipulative' depending on the context.

7
Word for logical fallacy of including a debatable proposition in a list of truisms
5
What's a word that means does not belong, and doesn't matter at the same time?
0
Can "I met her yesterday" mean "I met up with her yesterday"?
1
Harbor anger FOR or WITH?
0
Can the word mountain be used as the meaning of burden?
0
Other ways to say "native speaker"