What is the origin of "woof!"?

We know that woof is the sound a dog makes when barking. It is used both as a noun and a verb. The word is onomatopoeic but it is also used as an interjection. People woof too when they are attracted to someone. Wiktionary defines the interjectional sense as:

(humorous) Expression of strong physical attraction for someone.

It is, of course, listed in urbandictionary also but it is mentioned as a term in gay slang; and interestingly it is also used in a negative sense. Here are the top two entries for the positive and the negative sense in Urbandictionary:

In the gay community, it's an adjective used to describe a sexy guy, but not the feminine kind of guy, but a more masculine guy; one who you wouldn't identify as being gay if you saw him on the street.

Another version is the duplication of the word: Woof woof! It is also listed in Urbandictionary and the top two entries are again the positive and the negative sense:

Woof woof is very similar to grrr as in it means whoever is on the receiving end of it is looking mighty fine. You are also very likely to get laid a lot if people say woof woof to you. It's probably best used towards men however as you dont want the woman to think you mean she is dog which is completely different

An expression of negativity. An exclaimation of disapproval of the current situation at hand.

OED lists the interjectional and the second noun sense together and the earliest example is the sound of a collie:

But Etymonline mentions an earlier year:

The first line of an old question of mine reads: Scottish dogs used to waff

Further on, I quote:

The onomatopoeic waff (17th C) which means to bark or to yelp like a dog is, sad to say, virtually obsolete but its modern-day counterpart, woof (19th C), still thrives. 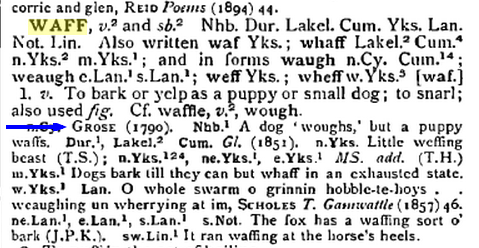 There's nothing new under the sun, people have been bestializing man's behaviour and personality since antiquity, the Scots used the onomatopoeic waff to describe someone worthless, someone who would leave no mark or visible trace of their existence after death.

As can be seen, women were not exempt from being compared to canines. Perhaps wauff-like gave rise to the expression she's a real dog, a highly unattractive and unpleasant girl or woman.

Woof! as an interjection is originated in the American late-night talk show called The Arsenio Hall Show in 1989. Here is the definition and the origin of the expression from The Routledge Dictionary of Modern American Slang and Unconventional English (By Tom Dalzell):

used as a shout of approval, especially as a male declaration of appreciation for a sexually desirable female US, 1992
Originated by television talk show host Arsenio Hall in 1989; the barking is accompanied by a pumped raised hand, fist clenched.

The "Wuff, Wuff" sound was based on howlings used at Cleveland Browns (aka "The Dogs") football games:

In Cleveland, Hall's hometown, die-hard fans of the local NFL team, the Browns, are known as "the dogs." And when they root for the team, they "woof." - news.yahoo.com

There is another interesting theory for the origin of woof! and it is also associated with the gay slang term woof!. It is said that woof is first uttered by Madeline Kahn in Mel Brooks' movie Young Frankenstein in 1974.

Some bears say it stems from the actress Madeline Kahn—perhaps not a gay icon, but close enough—in her role as Elizabeth in Mel Brooks’ Young Frankenstein. When the monster wordlessly propositions her, and after an initial shock, she notes the impressive bulge in his pants and exclaims, “Woof!” The same humor and insinuation underlie the term today, which is an apt fit for a bear gathering: an atypical but exciting sexual situation that doesn’t take itself too seriously.

Answering to the "positive and a negative sense", "human woof" and "interrelate".

The good and bad sense can be explained either by our envy and our reject of our animal side:

- bitch; the dog female, which can be in heat will have an sexual animal behaviour which is not considered as appropriate for a human.

Animals are acting in a more free way than what we allow in society, woofing is a trace of the desire to come back to a more natural living as much as a stigmatisation of an uncontrollable behaviour.

Not the answer you're looking for? Browse other questions tagged etymology slang interjections origin-unknown onomatopoeia or ask your own question.

25
The origins and usages of "waffle"