Is there a word that means deliberately ignorant, choosing to ignore?

I know what this word really means but I cannot help to think that ignorant also means he ignores his surrounding or the consequences of his actions. "He was ignorant, unwilling to warn the police about what has been happening next door for years” for example. Can anyone tell me the word I am looking for? Or is it too broad to find a suitable adjective?

I don't know about a single word, but what you're describing sounds like willful ignorance or willful blindness, described by Wiktionary as

Fig. to ignore or hide from obvious signs of danger.

In this particular case the phrase in denial seems appropriate:

in a state of refusing to believe something that is true.

Mary was in denial about her illness and refused treatment.

You could say he's got a three wise monkeys attitude (speak, see, hear no evil)... 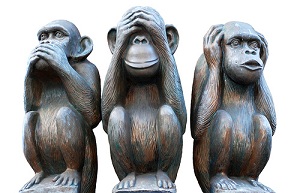 To ignore can conveys the concept of being deliberatly ignorant or choosing to ignore.

Obstinate - perversely adhering to an opinion, purpose, or course in spite of reason, arguments, or persuasion .

This is a cognitive bias

tendencies to think in certain ways that can lead to systematic deviations from a standard of rationality or good judgment, and are often studied in psychology and behavioral economics.

When a person "deliberately" ignores negative information it is called an optimism bias or the ostrich effect.

When a person "deliberately" ignores positive information it is called pessimism bias.

The term to use in my opinion depends upon the reason for adopting an attitude of willful-neglect.

A particularly British term for this would be “Looked the other way”.

Look the other way - Deliberately ignore wrongdoing by others. (Source: Google)

“He looked the other way for years, blissfully ignorant of the illicit goings on next door.”

Ignorant is used or taken offensively, but I personally feel it means that they do not know something (Unaware) and I would never use that word as a replacement for 'uneducated'. Like blissful ignorance: He was blissfully ignorant that a gang of thieves were waiting around the corner.

Anyway, with that in mind, the word I think you might be looking for is "Disingenuous" which means to pretend you don't know something... probably in an attempt to gain an advantage.

e.g. The disingenuous politician hid important facts from the voters.

or maybe like so "No, errm, I have no idea. You'd be better off asking someone else", he said disingenuously as he dashed towards the beautiful yet clueless blonde customer at the end of the aisle.

No doubt this blinder-wearer also sees a distinction between the images displayed on his television screen.

having or showing little or no emotion; indifferent

"She deliberately ignored the stench of sweat and urine of the homeless, and treated them as she would any other human beings."

There are many ways of expressing wilful ignorance in a pejorative sense, as you may see in the answers given here, but deliberate ignorance in and of itself is not inherently negative.

You may simply describe actions rather than apply an adjective that is loaded with judgement or even medical diagnosis.

"Mungo feigned ignorance of the fact that his neighbor was the civil-rights activist being sought by the secret police to be tortured and murdered."

Would you say that any of the following apply to Mungo?

One of the definitions for obtuse is "annoyingly insensitive or slow to understand". It is often used in a phrase "deliberately obtuse".

Synonyms: negligent, derelict, lax, neglectful, remiss, slack These adjectives mean guilty of a lack of due care or concern: The negligent landlord failed to repair the window. By not voting, he was derelict in his civic duty. If you're lax in attending class, your grades will suffer. Many neighbors felt that he had been neglectful of his property. It was remiss of her not to call to tell us she was coming. The teacher was slack in maintaining discipline.

I know it's been long, but everyone here seemingly forgot "turn a deaf ear". It does contain context of deliberate ignorance.

And it is mostly different from "turning a blind eye", with latter mostly used when "witnessing something happening/happened" is in context.

Why not oblivious? It suggests that a person is not paying attention.

Not the answer you're looking for? Browse other questions tagged adjectives confusables or ask your own question.

3
How would you name somebody that ignores something just because it's more comfortable or in their interest not to know it?
5
Word for someone who propounds a point despite all basic rational evidence against it
5
What's a word to describe a person being deliberately unclear/obfuscatory
1
Is there a word/phrase for "deliberately failing to understand a concept being explained"?

8
Missing words in English
3
What is a noun or adjective to describe somebody who juggles work, study, hobbies, family and more?
12
English word that means "a process that does not teach you anything"?
1
"Complicated" or "complicating"
3
Word for being aware of something but not doing anything about it?
1
Is there an adjective that means 'stick-like'