A company is using the term "Milanese Loop" for one of the watch armbands for the digital Watch.

I understand that Milanese is related to the Italian city of Milan. Yet my Internet research has not brought up any other use of the term "Milanese Loop" other than in relation to the said watch.

Is this term made up by the company, or has it existed previously?

No, it is a well-known kind of watch bracelet: 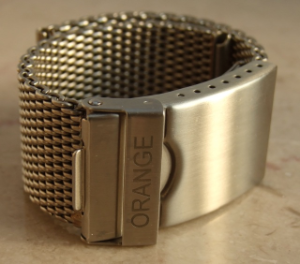 Obviously, the Milanese style comes from Milan (It. Milano), the capital of Lombardy in Italy.

Milanese bracelets hail from an old watch strap tradition that dates back to 19th century Italy but the style finds itself in vogue once again.
…
Milanese watch straps are named after the Italian city of Milan, where they were first created, but today are made all over the world, from Germany to the Far East.

Watch bracelets of stylish mesh or fine links are nowadays a permanent feature of gold and steel wrist watches. The eye-catching cuddly smooth and tender plaited mesh stucture is typical for these high-grade Milanese watch bands. The name is derived from their place of origin, Milan. (emphasis added.)

The Apple Watches are discussed at All 34 Apple Watch designs: Every band, case and face so far though the etymology is not mentioned in this article.

"Is this term made up by Apple:" Maybe not. newscentral recently reported on the beautiful Android Wear powered Huawei Watch

The Huawei Watch will be available in three colors including stainless steel, anodized black, and gold which is said to contain 3 ounces of 24 karat gold. There will also be a wide variety straps available including a high quality leather and a Milanese Loop design. (emphasis added.)

This type of bracelet originates from the protective metal chain-mail worn under the armour of ancient warriors. … From the 13th to the 19th centuries, this manufacturing process was the exclusive preserve of the Milanese goldsmiths who catered to princely connoisseurs and the clergy. Mechanisation in the late 19th century made it unique to the town of PFORZHEIM in Germany. Nowadays, this craft is still pursued in cottage industries throughout northern Italy and in Geneva." WorldTempus (www.worldtempus.com/en/)

5
Pejorative terms for children or teenagers using the Internet
2
“To Cut Stick” Origin
31
Of Yuppies and Yippies and Hippies
35
Is there a pre-Internet term for “gamification”?
6
Where have all the erections gone?
3
What does water in watermark refer to?
7
Term for “people paid to post bad reviews of a product”
10
What is the 1896 source for the origin of “dyke”?
0
Terminology for an “optical RGB image” in relation to more complex imagery like hyperspectral imagery?