What does “the line turns on somebody’” mean?

I came across the phrase ‘the line had turn on us’ in the following paragraph of the article titled “Running in the red: How the U.S. on the road to surplus, detoured to massive debt,” appearing in Washington Post (April 30.)

“Still, Hoagland (CBO analyst, William Hoagland), said, the abandonment of fiscal discipline in the wake of the surpluses clearly didn’t help. ‘Nobody pushed for paying for this stuff,’ he said. Not even after “it became very clear in the middle of 2003 that the line had turned on us. And the surpluses as far as the eye could see were no longer there.’”

I searched for the definition of ‘the line had turn on somebody,’ through Google to find no entry of this phrase. Isn’t “the line turns on somebody’” an idiom? What does ‘the line’ here stand for, and what does this phrase mean at all?

He's talking about the line as a plotted line on a graph. At one point the U.S. had been putting up surpluses, but expenditures rose to cancel those out and put the country into a deficit again. The "line" turned and went below even — right at around the point where Bush passed his tax cuts and engaged us in two costly wars.

Here's the line he's talking about: 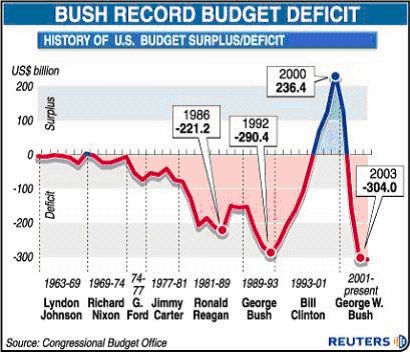 And you can read more about it.

This is an example of a more general idiom. To say that something has happened "on" someone adds (to the bare statement that it has happened) the implication that the fact that it has happened has affected him adversely. Some examples would be: 1) My car broke down on me. 2) The weather turned bad on them. 3) The winds shifted on him. 4) Our business venture failed on us. I don't think this is related to the idiom "to turn on" someone, which means to betray, as noted.

This looks like a rather dry economics text, so its is possible the meaning is limited to the meaning of reaching an inflection point on a function/graph. The idea being that it was going one direction, but "turned" a bit to be going in a different direction after.

However, this is rather overloaded phrase, and some of its other meanings can be rather ... er... colorful. So if you aren't completely confident with your English, avoid putting "turn" and "on" together yourself.

For example, in the context of there being some kind of possible conflict, "X turning on Y" could refer to X deciding to stop running/acting passive/being cooperative and instead becoming hostile. For example, a hunted animal with no place to run will often "turn" on its hunters and attack them.

In the context of drug use (and sometimes foods or pleasurable activities), "X turned on Y" means that person X introduced Y to the (supposed pleasures of) the thing in question.

In the context of sex, "X turned on Y" means that person (or sometimes activity) X got Y sexually excited.