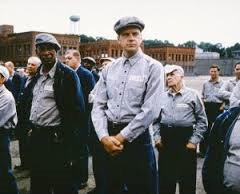 Although the lang drink example from 1887 cited by The Dictionary of the Scots Language didn't include "of water," there was another Scots example with the full phrase a year later:

I’m sure I dinna ken’ what she sees to admire in yon great big ostrich-neckit lang drink o’ water, wha only needs to be weel steepit in tar to mak’ a first-rate telegraph pole.