Why is the tendon named after Achilles?

There are two main or obvious possible reasons:

The first would seem to be the more popular notion, but it is completely un-Homeric—the invulnerability thing in particular would make nonsense of Iliad 18, and neither epic mentions the wound in the heel at all—while the second is authentically Homeric (Iliad 22.395–404).

Brewer’s 1898 (courtesy of Bartleby) is no help, nor is Free Dictionary, and Wikipedia hedges its bets (and ignores the question in Talk). OED cites the following, which clearly favors #1, but nowhere casts its authority behind that origin-story:

P.S.: Irene, commenting on a question regarding whether the expression needs an apostrophe, alleged that the Greek origin involved the adjective Ἀχίλλειος, but Liddell & Scott indicate that the tendon in question was simply called ὁ τένων ὁ ὀπίσθιος, the rear tendon, while their entry for Ἀχίλλειος does not mention any tendon. Wikipedia traces the expression to a decade before the OED example previously given:

The oldest-known written record of the tendon being named for Achilles is in 1693 by the Flemish/Dutch anatomist Philip Verheyen. In his widely used text Corporis Humani Anatomia, Chapter XV, page 328, he described the tendon's location and said that it was commonly called “the cord of Achilles”, now also called “tendo achillies” by anatomists. (“quae vulgo dicitur chorda Achillis”)

The legend about Achilles heel is at the origin of the expression Achilles tendon: 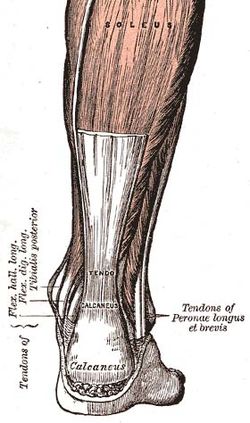 Not the answer you're looking for? Browse other questions tagged etymology eponyms or ask your own question.

0
Origin of “tragically named”
7
“Named for” vs. “named after”
17
Why is the action of removing a digital file named “Delete”?
3
Why is Peruvian Brown so named?
7
What is the source of the word “keystone” in reference to pricing a product
1
Are jeeps just jeeps or are they named after the brand?
2
Analogous versus analogue: why the extra “o” after the “g”?
12
“Shaw” → “Shavian” – why “v”?
5
What's the relationship of Ursa Minor/Little Dipper to dogs?