What is it called when a group of people forms a shape together?

There are great performances where a group of people, whether small or large, forms a shape or different shapes together; and you can usually see the shape from bird's eye view. It is usually like a dance performance and the performers sometimes mimic the motion of real-life events or living beings; or form the shape of a still object.

The following image is an example from a bank ad where a group of white-dressed people forms a heart shape and also mimics the rhythm of the heart: 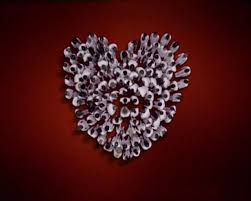 Here is the video of the bank ad where you can see the other shapes that they form:
https://www.youtube.com/watch?v=Z_fYJL40Ork

Another form of this art is performed behind a screen where a back light is used to project shadows of the bodies of the performers on to the screen to form seemingly impossible images.

The following image is an example from the performance of the group named Attraction when they performed on the show Britain's Got Talent. The elephant shape is formed by a group of people. 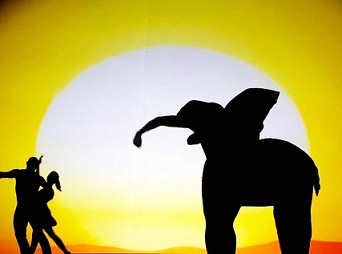 Here is a video where you can watch a performance of them on Britain' Got Talent: (start from 1:20 to skip the bibble-babble):
https://www.youtube.com/watch?v=UvvkJrKKYF8

There are words like collaboration and teamwork but they are too general and don't indicate any form of art. I tried searching with keywords like human, shape, group, dance but couldn't find anything that fits.

I think there might be a general term for this kind of art or formation. (although, there might be specific terms for the examples that I gave; but in the end, it is the same logic from different viewpoints.)

1. For the first artistic display, I would suggest mass choreography. A mass is a name for a large group of people while choreography means a sequence of steps and movements in a staged dance performance. If you Google mass choreography there's a choreographer called Penny Jones who seems to specialize in this form of dance composition. Watch the Arbank, a Turkish bank company, TV commercial.

It's by pure fluke, I discovered who the choreographer is for this TV advert.

There is another dance term called tableau which means a pause during or at the end of a scene on stage when all the performers briefly freeze in position. The website about.com says

A ballet choreographer sometimes creates a striking tableau by arranging the dancers on stage in a unique formation. The dancers strike their individual poses and remain motionless and silent until the curtain is closed.

One renowned American musical choreographer during the 1930s was Busby Berkeley 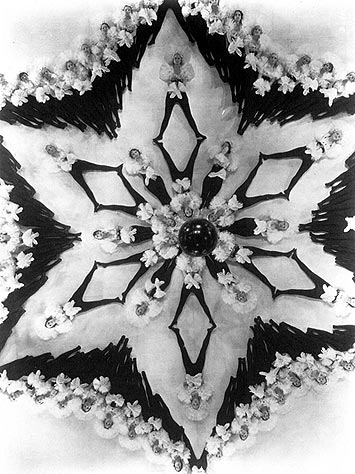 As a choreographer, Berkeley was less concerned with the terpsichorean skill of his chorus girls as he was with their ability to form themselves into attractive geometric patterns.

2. The term silhouette means a representation of someone or something showing the shape and outline only, typically colored in solid black.

The expression silhouette performance seems to encapsulate the art form presented by the BGT entertainers Attraction.

1,b : a creative work that resembles such a composition in incorporating various materials or elements

Collage (From the French: coller, to glue, French pronunciation: ​[kɔ.laːʒ]) is a technique of an art production, primarily used in the visual arts, where the artwork is made from an assemblage of different forms, thus creating a new whole. -Wiki

2,a: a literary, musical, or artistic composite of juxtaposed more or less heterogeneous elements

And so we end up with: a montage of collages.

Not the answer you're looking for? Browse other questions tagged word-choice single-word-requests terminology or ask your own question.

6
Term for people in artistic formation

4
What do you call it when a group of neglected people spontaneously forms a cruel society?
8
what is it called when your fingers turn in shape after being under water for a long period
14
What is it called when someone hates disabled people?
2
Multiple people speaking to a group
1
Word for a jazz style where a vocalist sings what was previously an instrumental solo
2
Word for mass oppression by smaller group of people
1
Verb to cause one to listen, as in "show" means to cause one to see
0
Why a group is called allies in war?
27
Word for how the white space between words can form patterns