English equivalent of saying “Don’t get in between the nail and the flesh”?

The saying “Don’t get in between the nail and the flesh” from my own language is typically addressed to someone who likes to provide unsolicited help by barging in on a heated conversation between two people; usually ending up making things worse by adding more oil to the fire.

I’m looking for an equivalent expression in English.

You can consider the proverb "Don't go between the tree and the bark." (as common usages are listed already.)

It conveys the precise meaning you are looking for (analogy to nail and flesh) but it never gained a common usage; and might be mainly literary. [There are also other usages with the phrase "between the tree and the bark".]

Meaning: Don't interfere when two people are having an argument.

It might be of European origin but it is mentioned in the novel the Modern Griselda by Maria Edgeworth (1804) which might be the first usage in English. [Maria Edgeworth is an Anglo-Irish writer]. 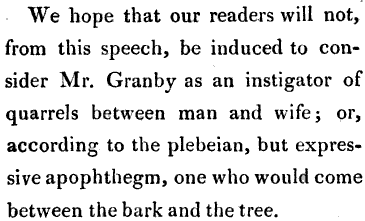 But, an earlier usage is mentioned in Le Médecin malgré lui (a comedy by Molière first presented in 1666) where the character Sganarelle misquotes Cicero. (from the book The Dramatic Works of Molière by Molière)

Something that carries the same violence as the original might be the idea of getting in the crossfire, i.e.

Leave Bob and Alice alone! You don't want to get stuck in the crossfire, do you?

Don't poke your nose where it's not wanted

This phrase means roughly the same as yours, without the painful metaphor!

It is an appeal to nosy people to not meddle in others' affairs.

I have two possible suggestions:

If the first one doesn’t work, then try the second: I promise it will get their attention. :)

For several hundred years, the full proverb has been translated into English, but I like Kenneth Taylor's rendition:

"Silence is Golden" Not specific for "don't meddle into a heated argument", it can still be used in the situation you have mentioned. It is used in circumstances where saying nothing is preferable to speaking.

@ermanen's answer may be the idiomatic equivalent of your literal translation but I believe that in the context (as supplied by your comment below) the saying should be interpreted as:
Don't do the work of the devil.

Don't sully yourself; Usually: with (something). This cliche appears in 15k Google hits.

to make soiled or tarnished