What is it called when something appears so obvious, no one expects it?

I honestly can not think of any examples that cannot be countered. Perhaps something like if a person brought a weapon out in the open to an airport - no one actually thinks it would be a weapon because that would be so ridiculous, no one would do that.

Or a student bringing alcohol in a vodka bottle to school, but having the vodka bottle out. No one would suspect it to actually be vodka, they simply assume its to be a joke.

Sounds like something "hidden in plain sight," that is, something so obvious, but unexpected, that it is overlooked and almost invisible.

• That at some point in time seems to be hidden, but actually is not hidden and is easy to be found. see, Your Dictionary Link

In certain respects (though not all) the perceptual (or, lack thereof) phenomena OP describes dovetails with research conducted by the psychologists Daniel Simons and Christopher Chabris, referred to as "inattentional blindness."

Inattentional blindness, also known as perceptual blindness, is a psychological lack of attention and is not associated with any vision defects or deficits. It may be further defined as the event in which an individual fails to recognize an unexpected stimulus that is in plain sight. The term was coined by Arien Mack and Irvin Rock in 1992 and was used as the title of their book of the same name, published by MIT press in 1998

Individuals who experience inattentional blindness are usually unaware of this effect, which can play a subsequent role on behavior.

The best-known study demonstrating inattentional blindness is the Invisible Gorilla Test, conducted by Daniel Simons of the University of Illinois at Urbana-Champaign and Christopher Chabris of Harvard University. This study, a revised version of earlier studies conducted by Ulric Neisser, Neisser and Becklen in 1975, asked subjects to watch a short video of two groups of people (wearing black and white t-shirts) pass a basketball around. The subjects are told to either count the number of passes made by one of the teams or to keep count of bounce passes vs. aerial passes. In different versions of the video a woman walks through the scene carrying an umbrella (as discussed above), or wearing a full gorilla suit. After watching the video the subjects are asked if they noticed anything out of the ordinary take place. In most groups, 50% of the subjects did not report seeing the gorilla (or the woman with the umbrella). The failure to perceive the anomalies is attributed to the failure to attend to it while engaged in the difficult task of counting the number of passes of the ball. These results indicate that the relationship between what is in one's visual field and perception is based much more on attention than was previously thought. See, wikipedia inattentional blindness 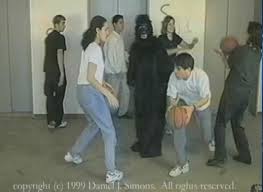 Gorillas in the Midst

How about under one's nose:

Right there, in plain view, as in Your keys are on the table, right under your nose. This expression is generally a reminder that something one cannot find is actually there. [ c. 1600 ]

Depending on the application I think you can also use SEP. If anyone has read Hitchhiker's guide to the galaxy they will understand completely.

Somebody Else's Problem (also known as Someone Else's Problem or SEP) is a psychological effect where people choose to dissociate themselves from an issue that may be in critical need of recognition. Such issues may be of large concern to the population as a whole but can easily be a choice of ignorance by an individual. Author Douglas Adams' comedic description of the condition, which he ascribes to a physical "SEP field", has helped make it a generally recognized phenomenon. Somebody Else's Problem used to capture public attention on matters that may have been overlooked and has less commonly been used to identify concerns that an individual suffering symptoms of depression should ignore. This condition has also been employed as trivial shorthand to describe factors that are "out of scope" in the current context.[1]

Also the story used in the book about moving a mountain would explain the idea perfectly. They have the jist of it in the fiction section of the wikipedia link also.

These are all great takes on why somebody wouldn't or did see something, but I'm trying to work out an angle on the "no one expects it" aspect, which is slightly different. (Let me know if I'm hair-splitting too fine here, OP!)

I'm thinking: "Disarm the pissed off gunman in a hold-up by simply stepping forward and taking the gun out of his hand." It's not that no one would notice it happen, but that of all the contingencies and possible outcomes running through everyone's mind in that situation (including the gunman's presumably), that solution would have been reflexively dismissed ahead of time without sincere thought because it was "too obvious". [Everyone: "Obviously he/I'd see you coming and just shoot you before it worked." Reality: He might be so startled he just freezes in pure surprise or while he's trying to work out your "real" (better/sneakier) plan or angle, reflexively refusing to believe you would do something so obvious.]

"Completely counter-intuitive" I think comes closer. There might not be anything better than "so obvious/blatant no one would/did/does expect it".

Contrary to intuition or common sense.

Particularly contrary to common sense in your examples, to the point where onlookers might ask, to put it bluntly, "Are they really that stupid?"

The situation you are referring to can be described as an absurdity :

Some people think the answer is blindingly obvious. However, even if I noticed it, I might not want to indicate that I've noticed the Elephant in the Room.

There's the expression "too obvious", and the one you already used, "so obvious [no one thinks of it]". Maybe that's too obvious...

Poe's "The Purloined Letter" describes an incident in which a criminal "hides" a stolen letter (written by an important lady and containing compromising information) by leaving it slightly disguised and in plain sight. Detectives turn the rest of the criminal's home practically inside-out looking for secret hiding places the letter might be stowed in, and never manage to find it.

This story embodies the idea you're trying to describe. For this reason, I've heard and used the term purloined letter to refer to an item concealed by such a tactic.

The term refers to a question, problem, solution, or controversial issue which is obvious to everyone who knows about the situation, but which is deliberately ignored because to do otherwise would cause great embarrassment, or trigger arguments or is simply taboo. The idiom can imply a value judgment that the issue ought to be discussed openly, or it can simply be an acknowledgment that the issue is there and not going to go away by itself.

It's too big to be true.

What is it called when something appears so obvious, no one expects it?

Jack pulled a vodka bottle out of his knapsack and started taking slugs from it at lunch. I thought it was water and him trying to be funny. But when he got the giggles during the math quiz in Period 5, well, duh, I guess it was vodka after all.

Not the answer you're looking for? Browse other questions tagged meaning phrase-requests or ask your own question.

50
Term for being unable to see glaring errors after working for some time on a task?
17
When somebody is watching something for so long they stop seeing details
8
What do you call a Swiss man?
1
Alternative for "found something accidentally even when it was lying really close the whole time"
2
What's a word or phrase to describe the discovery of something startlingly obvious?

5
What is it called when something is described by what it isn't?
2
Is this correct usage of the word irony?
3
When something appears a certain way, but is also its opposite
0
Word or expression for one-or-more quantification, in prose writing
26
Word that means married but also includes pre-marriage relationship?
1
What does it mean to place something “Like a bomb”?
15
If I cannot win, then I will make it impossible for you to win