Why do people say 'buck' for a dollar?

I grew up in South Africa. When someone said something costs 'two bucks' it meant two rand (like saying two dollars, but South African currency).

It made perfect sense, as the 1 Rand coin had an image of a Springbok on it (3rd from right):

However, I then moved to New Zealand. The 1 dollar coin has a Kiwi on it (not a buck). But you still hear people saying 'a buck'. Even in adverts on tv.

So what gives? I assume there's a different etymology, but all I can find online are some comments about buckskin, but that doesn't really seem certain.

Buck is not originated from any currency design that features a buck or similar animal and it is used as a slang term for a dollar or similar currency in various nations including Australia, Canada, New Zealand, Sri Lanka, South Africa, Nigeria and the United States.1

The Concise New Partridge Dictionary of Slang and Unconventional English says that buck is originally US but applied in Hong Kong and other countries where dollars are unit of currency. US, 1856.

On the other hand, a coin design (or an animal as a national symbol) can give the slang name to the coin or the currency. For example: 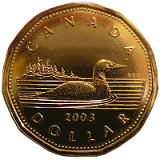 So, where is buck originated from as a slang term for dollar?

OED says that the origin is obscure and lists the earliest usage below from 1856:

However, there are two leading theories for the origin of buck as a slang term for dollar but there is no consensus on one origin.

1. From poker, where the token in front of the dealer was called a buck whose handle was made of buck horn and it is related to the phrase pass the buck.

Pass the buck is from 1865, said to be poker slang reference to the buck horn-handled knife that was passed around to signify whose turn it was to deal. [Etymonline]

The below excerpt is from the book Poker (By Wikipedians):

The use of other small disks as such markers led to the alternative term "button". Silver dollars were later used as markers and it has been suggested that this is the origin of "buck" as a slang term for "dollar", though by no means is there universal agreement on this subject. The marker is also referred to as "the hat". The origin of this term is believed to stem from the wearing of a hat having been used to denote dealership.

2. From trading, short for buckskin, a common medium of exchange in trading with the Indians.

Meaning "dollar" is 1856, American English, perhaps an abbreviation of buckskin, a unit of trade among Indians and Europeans in frontier days, attested in this sense from 1748. [Etymonline]

The below supporting evidence is from the book Daily Life on the Nineteenth Century American Frontier (By Mary Ellen Jones) and there is even an example usage from 1735:

Beaver skins and buckskins became units of exchange in backcountry areas of the colonies, influencing not only the economy but also the language. In 1735 a trader complained about a clerk who had that day "sold only eight bucks of goods". And in 1748 the Indian Agent Conrad Weiser told Ohio Indians, "Every cask of whiskey shall be sold to you for five bucks in your town" (Furnas,37).

Another supporting evidence from the book America in So Many Words: Words That Have Shaped America (By Allan Metcalf, David K. Barnhart):

The Indians taught the European settlers the value of a buck. In the eighteenth century, that meant a deerskin, used for trading in its own right and as a unit of value for trading anything else. So in 1748, while in Indian territory on a visit to the Ohio, Conrad Weiser wrote in his journal, "He has been robbed of the value of 300 Bucks"; and later, "Every cask of Whiskey shall be sold...for 5 bucks in your town."

Additionally, there is one related origin from Canada where buck is originated from beaver pelt trading and it gave the name to a coin that features a beaver on it:3

King Henry IV of France saw the fur trade as an opportunity to acquire much-needed revenue and to establish a North American empire. Both English and French fur traders were soon selling beaver pelts in Europe at 20 times their original purchase price.

The trade of beaver pelts proved so lucrative that the Hudson's Bay Company honoured the buck-toothed little animal by putting it on the shield of its coat of arms in 1678. Sir William Alexander, who was granted title to Nova Scotia in 1621, had been the first to include the beaver in a coat of arms.

The Hudson's Bay Company shield consists of four beavers separated by a red St. George's Cross and reflects the importance of this industrious rodent to the company. A coin was struck that was equal to the value of one male beaver pelt – it was known as a « buck ».

The following extract, as well as other sources, suggest that the more plausible origin of buck meaning dollar comes from the custom of using deerskins as a medium of exchange before the introduction of the USD as the official american currency. This theory is extremely plausible and backed up by a fair bit of documented evidence. It reasonable to assume that the term buck remained and was adopted also by other economies where the USD was used before or together with their national currencies.

Buck skin as a medium of exchange

I only know how to post images in an answer.

In the United States, we were close to having a buck (the male deer) on our money. It would have been on the Quarter, though, rather than on the dollar.

From this site about the 50 States Quarters Program, we can see that a design for the reverse of the Illinois quarter was one of the designs submitted to the mint, making it somewhat of a finalist. 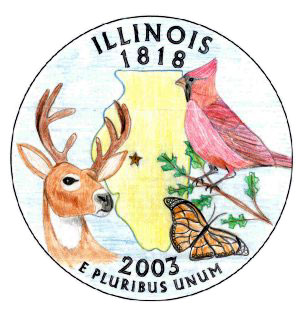 The image can also be seen here with other proposed designs and here on its own.

From the image, we might even say that we can see 1/4 of a male deer on this proposed "quarter buck".

Wisconsin also had a similar "finalist" for its state Quarter design.

Some other states had proposed designs which included deer, but which were not seriously considered. Minnesota, Nebraska 1. Nebraska 2

Montana had a proposed design with a male elk minted, but elk (male or female) are not called "bucks". Male elk are called "bulls" or "bull elk". See also here and here to see submitted elk designs for Montana.

There is also a bull elk on the reverse of the 2011 America the Beautiful Quarters Olympic National Park (Washington) coin.

Edit: I couldn't find any images of deer at this guide to US coins site, but I might have missed something.

Not the answer you're looking for? Browse other questions tagged etymology expressions colloquialisms or ask your own question.