At times I have caught myself writing the noun form of abolish as "abolishment" and then pausing before realizing it should really be "abolition". Even as I type my spellchecker tells me that "abolishment" is wrong, but I know it isn't, it's just rarely used. The website grammarist has this to say

Abolishment vs. abolition
Abolishment appears in many dictionaries and is not considered incorrect, but abolition is preferred in all modern varieties of English. Both nouns mean the act of doing away with something, and neither has any meanings it does not share with the other.

Both words date from the early 16th century (soon after abolish came to English from French roots), but abolition has always been more common, and it now appears about ten times as often as abolishment. Some writers reserve abolishment for senses unrelated to slavery, but the distinction is unnecessary.

Nevertheless, I would like to know why the most common noun form is abolition. If I look at other verbs ending -ish it seems that the suffix -ment is preferred to make nouns.

Curiously, Oxford Online Dictionaries lists only the noun abolishment in its entry for abolish, although it does have a separate entry for abolition. Is there a reason for this?

It is most likely that "abolition" is the more common form due in large part to its association with the "abolition movement".

France was one of the earlier countries to abolish slavery within its borders, and Société des amis des Noirs was one active group in the movement in France.

The picture on that web page refers to (pardon my French) L'Assemblée Nationale pour L'Abolition de la Traite des Noirs and is dated 1790. Clearly "abolition" was the preferred term in France, and that preference would have transferred to England. 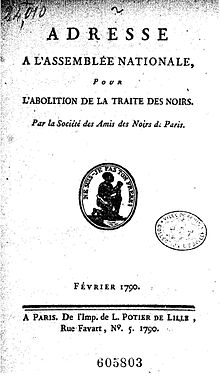 Further, those advocating abolition in England and the US were "abolitionists". It would have been a mouthfull to call them "abolishmentists".

The main reason one might choose "abolishment" over "abolition" (aside from the subtle difference in meaning) is that "abolition" is associated with the movement to end slavery, and thus might be confusing or distracting when used to refer to a different process. But this confusion is not likely in native English speakers, unless the context contributes to the confusion.

According to The New Fowler Modern English Usage -

"abolishment and abolition" both entered the language in the 16c. For two centuries they coexisted as synonyms (used of sins, faith, guilt, and other abstract concepts) with approximately equal currency.

The choice of abolition by those working for the abandonment, first of slavery, and then of capital punishment, ensured the relative supremacy of this member of the pair.

According to French Anti-Slavery: The Movement for the Abolition of Slavery in France, 1802–1848, by Lawrence C. Jennings,

The first French abolitionist movement centered around the Société des Amis des Noirs. Founded in early 1788 by the journalist Jacques Pierre Brissot and his associate Etienne Clavière, with the close collaboration of Count Honoré de Mirabeau, the Amis des Noirs was inspired by the humanitarianism and egalitarian currents of thought implicit in the eighteenth-century Enlightenment. It was also profoundly influenced from the moment of its inception by the British precedent. The Amis des Noirs was modeled upon the London Society for the Abolition of the Slave Trade, which had been formed in May 1787.

Contextual needs, however, still leave room for abolishment to be used with fair frequency.

The noun abolition is a "learned" form that is essentially identical in construction to the Latin noun abolitio. For many of the other -ish verbs that you mention, there is no corresponding Latin noun ending in -itio, so a form in -ition would have to be created within English by analogy—something that I think learned individuals would have been reluctant to do in many time periods.

For example, accomplish comes from the Old French verb acumplir/acomplir (modern French accomplir), but in Classical Latin there is no attested verb with the form *accomplire. The related verb complere is attested in Classical Latin, and is the source of the English noun completion.

The verb astonish seems to be of uncertain origin, but it seems clear that there is no Latin verb *astonire that could serve as a source for a Latin noun *astonitio.

The verb nourish is from the Latin verb nutrire, whence the related noun nutrition. But French sound changes may have somewhat obscured the etymological connection between the words nourish and nutrition.

The verb vanish is related to the Latin verb evanescere, which is the source of the noun evanescence.

Not the answer you're looking for? Browse other questions tagged meaning word-choice nouns suffixes derivational-morphology or ask your own question.

3
Difference between “devotement” and “devotion”

3
Forming occupational nouns: Why do you say “butcher” and not “butchian” or “butchor”?
0
Grumbling vs Grumble (as nouns)
2
Why are names considered proper nouns?
5
Is “programming” not a noun?
4
Why do nouns and verbs which are stressed differently all exhibit the same variation?
4
Stress pattern changes with noun and verb homographs: exceptions to the rule
2
Two-word verbs described with One-word nouns