Idiom: to be at loggerheads

Idiom to be at loggerheads with someone over sth

Supplement: to be at loggerheads

My idea ( a hypothesis) is that "loggerheads" was "lock their heads". Two constantly quarrelling neighbours can be compared to stags in rutting season running into each other with fury. An expression like "They are at the stage of stags that lock their heads" may have been shortened and a bit transformed to "at loggerheads". We have expressions such as

The already existing word loggerhead (various meanings) may have had an influence in the transformation from ○locktheirheads to loggerheads but I don't think that loggerhead, a tool for melting pitch or a fool, is really the origin for a saying expressing the idea of constant quarrelling.

Loggerhead was an established term for blockhead by 1600. Shakespeare uses loggerhead or loggerheaded four times in his plays. From The Taming of the Shrew (by 1592):

2 Servant. I have a head, sir, that will find out logs,/And never trouble Peter for the matter. [Exit.

Biron. [To Costard] Ah, you whoreson loggerhead! you were born to do me shame.

Poins. Where hast been, Hal?

Earlier still is the term log-headed. From Richard Edwards, Damon and Pythias (1564):

Aristippus. ... What crying out, what cursing is there within of Carisophus,/Because he accused Damon to King Dionysius!/Even now he came whining and crying into the court for the nonce,/Showing that one Onaphets had broke his knave's sconce./Which strange name when they heard, every man laughed heartily,/And I by myself scanned his name secretly;/For well I knew it was some mad-headed child/That invented this name, that the log-headed knave might be beguiled.

The notion of being "at loggerheads" was earlier expressed in the phrases "to come to loggerheads" or "to fall to loggerheads." The first instance of this phrase, according to John Farmer & W.E. Henley, Slang and Its Analogues, volume 4 (1896)‚ which is the source of many of my references here—is from Charles Cotton, Scarronnides, Or, Virgil Travestie (by 1670):

Abel Boyer, Dictionaire Royal: Anglois–Francois, volume 2 (1722) has this brief note about "to fall to loggerheads":

To fall to Loggerheads, (to go together by the Ears, to Fight)

And a number of subsequent dictionaries, including William Perry, The Synonymous, Etymological, and Pronouncing English Dictionary (1805), give this version:

To go or fall to loggerheads, to scuffle, to fight without weapons.

The first instance of "at loggerheads" that Farmer & Henley identifies is from an 1846 issue of [Punch]:

'F. M. the Duke of Wellington will let Mr. Punch have the earliest intimation of anything definite being come to.' As we have not heard from his grace. ... we can only presume that the ministers were up to the last moment at loggerheads.

The phrase also arises in Anne Baker, Glossary of Northamptonshire Words and Phrases (1854):

Its meaning appears to derive from the name of a few tools that were also used as weapons during very strong disputes.

The idiom at loggerheads,

After some research, I firmly believe that the term 'to be at loggerheads' has its origins in the Welsh language and it came about during the peace that prevailed after the battle of Shrewsbury in 1403. Up until then there had been centuries of conflict between Wales (Cymru) and England (Lloegr).

The emblem of Shrewsbury is colloquially named the Loggerheads and I believe that this colloquial use is derived from the Welsh Y Baner Lloegr Hedd which means The English Flag of Peace. The first part of loggerheds is Lloegr (England) and the suffix is Hedd (peace).

There are two communities called Loggerheads near the border, one in Wales and one in England. Shrewsbury was central to the Welsh wool trade and both languages would have been used in markets, taverns and public spaces. I would expect that the trading and the general deal making in the medieval streets and markets would lead to arguments and they would then be at Loggerheads. I can imagine that the Shrewsbury emblem was symbolic of the peace and a place where people from both countries could barter and trade in peace using both Cymraeg and English.

The people of Shrewsbury still to this day call their flag the Loggerheads and I believe that this is the true etymology for the term when used in this particular context and I believe this is where the idiom 'to be at loggerheads' is originated - on the North Wales border where the two languages overlap.

The term originates from the transportation of timber via rivers:

The main problem is if the logs get drawn together and form a block in the river, thus causing all the other logs to jam up behind them. This would be more likely at certain places on a river, such as a bend. This scenario is envisaged as 'coming to loggerheads', either as the logs jammed, or they approach a 'loggerhead'.

As my previous paragraph hints, this is called a 'log jam', and here is a picture showing one: 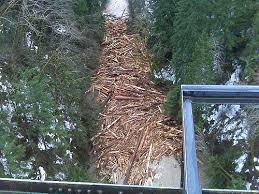 The logs have blocked because the river narrows, and this place is called, in lumberjack lingo, a loggerhead.

7
Origin of idiom "wearing the < role > hat?"
2
The origin of the "free cash" idiom
11
Origin of the idiom "butt of jokes"
16
Etymology of the idiom "by and large"
2
Idiom: Bear with me
8
Idiom whose etymology involves misunderstanding the original meaning
3
Does the idiom "in check" come from chess?
1
Is "boggles down" an idiom of "simplifies"?
1
Shifting sands idiom