What do you call excessive snow?

When there’s a typhoon, the result is called a flood.

But when there’s a snowstorm, what do you call all the snow it left behind? Is there a particular word for that?

I wouldn't call an excessive amount of snow an accumulation. As Steven Littman pointed out in a comment

Actually, whether it's three inches or thirty-six, whether you call it thirty-six inches or three feet, anything that doesn't melt upon contact with the ground is an accumulation. Three inches can paralyze a southern city, while the Midwest goes on as if nothing happened with nine inches.

To describe a considerable quantity of snow on the ground, I would say

And Wikipedia suggests a one word solution

An avalanche is a natural disaster with which I would associate an "excessive" snow fall.

You can consider snowcover. (although, it doesn't mean excessive snow)

It is the accumulated snow on the ground after a snowfall but it can be the result of a snowstorm as well. Additionally, there are terms like high/low snowcover and heavy/deep snowcover in meteorology. (also: snow cover)

It is also mentioned in a book about snowstorms. The below image and the excerpt are from the book Northeast Snowstorms: Volume 1 and Volume 2 (by Paul Kocin, Louis Uccellini): 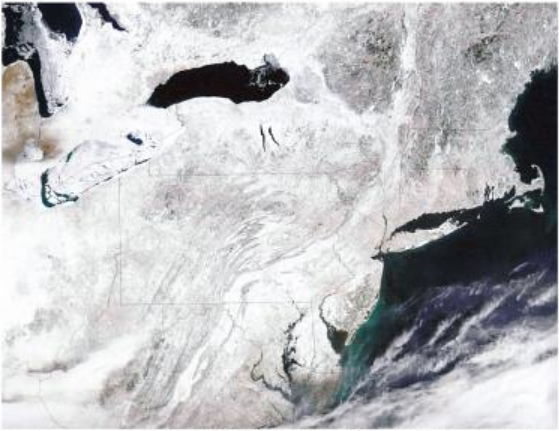 There is also the term snow pile but it is usually used for the accumulated snow in certain areas.

And there is snow flood from melted snow.

Technically, snow equivalent of water damage (and flood) can be explained with snow-water equivalent measurement.

Wikipedia explains the snow damage based on SWE as below:

When heavy, wet snow with a snow-water equivalent (SWE) ratio of between 6:1 and 12:1 (in extreme cases, as heavy as 4:1) and a weight in excess of 10 pounds per square foot (~40 kg/m2) piles onto trees or electricity lines – particularly if the trees have full leaves or are not adapted to snow – significant damage may occur on a scale usually associated with hurricanes.

Where I'm from, we will often refer to a large amount of snow that fell relatively quickly as a dump.

We had a big dump of snow over the weekend.

I'm not sure how widespread that is, but it's descriptive enough that many people could probably figure it out, even if they have never heard the expression before. If you just say 'a dump,' people will probably think you're referring to something else, unless the context is clearly recently fallen snow.

with SWR, when there is no single word for what you are asking about, it's traditional to provide a formal answer "there is no such word".

There is no such single word equivalent to "flood" for massive "snow buildup".

You just have to struggle with the phrase suggestions everyone has provided.

On the open trails of a ski hill it is called

The low and high estimated range of total natural and snowmaking base depths on trails that are open. This is stated as a range in inches.

Additional terms such as corn, powder, granular, etc are used to describe the texture of the snow so that skiers can properly wax their skis for minimum friction.

Re "When there’s a typhoon, the result is called a flood.": Not necessarily, and not always. It's perfectly possible to have hurricanes/typhoons without flooding, if for instance there's good enough natural drainage to handle the rainfall. And of course it's likewise possible for floods to have other causes.

Really the only equivalent to 'flood' for snow would be an avalanche, and the equivalence is only for sudden flash-flooding. To the best of my knowledge, there's no single word for an excessive amount of snow, because having a lot of snow is seldom a problem in the way that a flood is a problem. Also, there's a subjective factor in the amount of snow that would be thought excessive, whereas flooding is fairly tightly defined. Most rivers have a defined flood level, and forecasts & reports will refer to that level. For snow, the closest thing (in the western US, at least) are mountain snowpack levels, which are typically reported as a percentage of the historic average. But hardly anyone in these areas would consider even 200% of average as excessive.

When there's a typhoon, the result is a flood.

Based on your initial comparison, I need to take into the account that the second result needs to be a potentially damaging and generally negative.

The closest word I can give you is "snowbound".

You won't find any direct equivalent, because the situations are fundamentally different:

In flooding (regardless of cause), the local water level rises to submerge areas of normally exposed land. The state change is absolute and dramatic, even if the water is shallow.

You might find words for heavy snowfall, but for a snowy region this is still only a difference in degree, and not a transformative event like flooding.

The closest analogue to flooding might be any amount of snowfall or snow cover in an area that normally receives none, but even that is a much less of a dramatic event than flooding. Given a local expectation of no snow, simply "snowfall" or "snow cover" should convey the situation just fine. I have seen people misapply the term "blizzard" to such events, though, even if the snowfall itself was utterly peaceful.

I wouldn't be surprised to see it called:

In New Zealand we use the term heavy snow for an accumulation from an event of more than 50cms (~1 1/2 feet) or where the rate of snow fall is more than 6cm (~2 inches) per hour.

I've been fond of kaniktshaq moritlkatsio atsuniartoq for a while now; alas, I cannot pronounce it.

7
Beneath snow, under snow, or something else