What is the terminology for a phrase whose common usage is diametrically opposite to its literal meaning?

For example, consider the following simple phrases one typically says upon entering a popular restaurant:

If the person literally loves fish, he/she wouldn't really want to take its life and eat it. What they really mean to say is I love cutting and eating a fish.

Does this come under Irony? But Irony is generally a deliberate attempt to reverse a meaning for creating humor.

If one word means its opposite, it's called an autantonym or contronym.

What you are referring to is called polysemy:

(from Greek: πολυ-, poly-, "many" and σῆμα, sêma, "sign") is the capacity for a sign (e.g., a word, phrase, etc.) or signs to have multiple related meanings (sememes), i.e., a large semantic field. It is usually regarded as distinct from homonymy, in which the multiple meanings of a word may be unconnected or unrelated.

Charles Fillmore and Beryl Atkins’ definition stipulates three elements: (i) the various senses of a polysemous word have a central origin, (ii) the links between these senses form a network, and (iii) understanding the ‘inner’ one contributes to understanding of the ‘outer’ one.

Love can be used reasonably and accurately with both versions you give, because language is more than the sum of its parts. Love is much more than one thing, though one word can be used.

Verbal irony is something different. After the Charlie Hebdo attack, verbal irony was everywhere, as in this cartoon. 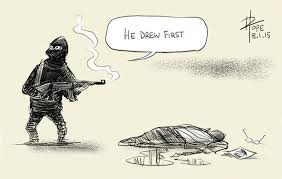 Edited to add: OP's comment is an example of contronym:

Contronyms ...do not tend to cause confusion, as it is generally clear from their grammatical or semantic context which of their two meanings is intended. In the sentence “He buckled,” for example, we know that the subject collapsed, since in its sense of “to fasten,” the verb is transitive and must be followed by a direct object; similarly, in the two grammatically identical sentences, “The house weathered the storms” and “The storms weathered the house,” simple logic tells us what “weathered” means in each case. Yet there can certainly be instances — e.g., “The horse had a handicap” — in which a contronymic sentence is interpretable in opposite ways.

Till a' the seas gang dry, my dear,/And the rocks melt wi' the sun;/And I will luve thee still, my dear,/While the sands o' life shall run.

These could loosely be a type of solecism, but the examples you gave happen to be special cases that don't demonstrate what I think you mean to demonstrate.

A better example would be the word "literally." People started using it for emphasis even when it wasn't true, and then it got to the point where it was so overused that people started using it in place of "figuratively," which of course means exactly the opposite. This particular solecism is a linguistic scourge among young women in the US.

Buzzfeed is literally my life

I would literally kill for a frappucino

It is known as a "common error". Another good example is the word inflammable.

As in: "Don't worry it says this liquid is inflammable." The common error is that inflammable is not the opposite of flammable, it is the same as.

Not the answer you're looking for? Browse other questions tagged phrase-usage or ask your own question.

1
What are non-ironic English expressions used with a meaning opposite to their literal meaning?
1
"Ridiculous amount": semantic change (amelioration) originated from an antiphrasis? When and how?
0
What is the term for a word that has come to mean the opposite of its orignal meaning?