Origin of the phrases “third time’s the charm” and “third time lucky”?

What would the origin of the saying “Third time’s the charm”?

I’ve also heard “third time lucky” used as well. Are these two expressions related to each other?

I think the origin of these phrases is from Shakespeare's The Merry Wives of Windsor, 1602: 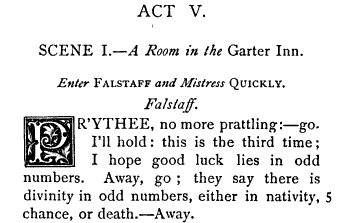 As for which came first, lucky or charm, I found the charm variation earlier and not of American origin as The Phrase Finder has, but British. This is from The Cabinet Album, 1830 (date check):

And the lucky version I found three years later in The Port Admiral, by William Johnstoun N. Neale, 1833 (date check):

Since these two variations can be traced back to the same time period and the same country, I think it's safe to say they are related and that they both echo Shakespeare.

Edit: Heck, why not throw a pretty Ngram in for good measure:

Gary Martin at The Phrase Finder has the British phrase third time lucky derived from the earlier "proverbial" luck of the third adventure, traced in print back to 1839. As to the reason for the luck, the theory of it referring to an English law freeing a condemned man after three failed attempts at hanging is debunked. He concludes:

It seems more likely that it is just a folk belief that, having had setbacks, we ought to persevere and not give up. This is enshrined in the phrase 'try, try and try again'. Three seems to be the right number of times to try. Two isn't enough but four is too many. Think of every time you've seen a drama in which a character tries to unlock a door with an set of unfamiliar keys. The first key fails, the second key fails - it is always the third that works.

And on its relatonship to the American version, third time's the charm:

This may be an variant of the earlier 'third time lucky' or it may have arisen independently in the USA.

A citation is given of this phrase from 1912.

On no evidence whatsoever, I had always thought it was older than Shakespeare.

"If you think about it, you'll soon realize that the 'second coming' of Christ, or 'The Rapture' as they call it, is a joke - like many other jokes written into the New Testament. Why is it a joke? Because ( in the story ), Jesus came into the world once, when he was born to Mary. Then, he died, that's the first coming. Then, he came back again after three days ( and that's another joke ), that is the 'second' coming! The 'second coming', that the Christian fundamentalists call 'The Rapture', will never come. Because it had already happened in their own great Jesus story written by Arrius Piso! Note: This joke is well known within the inner circle, and is the source for the saying; "The third time is a charm."

Not a firm answer for the quote's origins, but it opens up a whole new can of worms for research.

As with all things, this phrase has its origin in the Holy Trinity. Here is a relevant quote from Colossians 1:16–18 in the New Testament of the Christian Bible about this:

16 For by Him all things were created, both in the heavens and on earth, visible and invisible, whether thrones or dominions or rulers or authorities — all things have been created through Him and for Him. 17 He is before all things, and in Him all things hold together. 18 He is also head of the body, the church; and He is the beginning, the firstborn from the dead, so that He Himself will come to have first place in everything.

MarkMark
11
1
Add a comment  |
Highly active question. Earn 10 reputation (not counting the association bonus) in order to answer this question. The reputation requirement helps protect this question from spam and non-answer activity.

Not the answer you're looking for? Browse other questions tagged etymology phrases proverbs origin-unknown aphorism or ask your own question.