What Is the Origin of the Word "Sherpa"?

Sherpa n. a Himalayan person who is often employed to guide people through mountains and carry their equipment

Date: 1800-1900
Language: Tibetan
Origin: sherpa 'someone who lives in an eastern country'

Sherpa 1847, from Tibetan, literally "dweller in an eastern country."

However the word itself sounds very much Persian to me, in which sher means lion and pa means foot/leg, and the combination altogether (similar to other two-word combinations in the language) can indicate someone who has strong legs and feet that makes it easy for them to climb up the mountains.

I was talking to another linguist recently and they had the same opinion on the word, and that encouraged me to look further more into the word. As I can see, Tibetan is not even something related to Persian or any other Indo-European languages, and belongs to Tibetic (Sino-Tibetan) languages.

Is there any further information on the origin of this word?

OED confirms that it is from Tibetan sharpa, inhabitant of an eastern country. The other forms listed are Serpa, Sharpa and the earliest forms recorded are Serpa and Sérpá from 1847.

The following excerpt is from an article titled "Sherpa History" from the official site of Tapting (a village development committee in Nepal) and explains the origin of sherpa with historical references and citations from ethnologists.

However, I did some research regarding your theory about sher being lion in sherpa and I could find some hints related to Thakali language (Thakali is one of the ethnolinguistic groups in Nepal along with Sherpa and these two groups share the same region in Nepal). (see map).

The first reference I could find is about the Thakali clan Sercan which has a lion on their emblem; and the root of the word is mentioned as ser- which suggests that it might mean lion. (from the book Himalayan Anthropology: The Indo-Tibetan Interface edited by James F. Fisher):

Note: Snellgrove is a tibetologist and Oppitz is an ethnologist.

I continued my research by focusing on the term Sercan and I could find another form of the term which is Shercan. It is one of the four Thakali clans and the clan protector is mentioned as the white lion of the glaciers. (from the publication Ritual practice and group maintenance in the Thakali of central Nepal by Andrew E. Manzardo)

Then, I could finally find a source that actually says sher means lion in Thakali language. (from the book The Thakali: a Himalayan ethnography by Michael Vinding)

Since the Nepali clan names were introduced in the present century, it is somewhat surprising that the Tamang Thakali do not know their meaning. The account of the Cyogi clan, the Cyogi Rhab, written in the Devanagari script, renders the clan names as gaucan, tulacan, syercan and battacan. The ending -can may be an attempt by the names inventor(s) to connect the Tamang Thakali with the Thakuri clan Chand. Gau means 'cow' and may be related with gaucan clan god. Sher means 'lion' and appears related with the Shercan clan god. Bhatt_ may mean 'exchange' and may be indirectly connected with the Bhattacan clan god. The meaning of tula is a puzzle.

Oh! Let's not forget pa. This Tibetan affix strongly suggests that it is related to people in the word sherpa, although it is a very versatile affix that can be used in a variety of ways. The below excerpt is the definition of pa from A Tibetan-English Dictionary with special reference to the prevailing dialects By H. A. Jäschke: 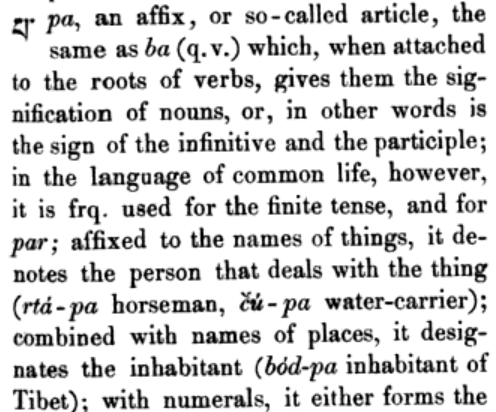 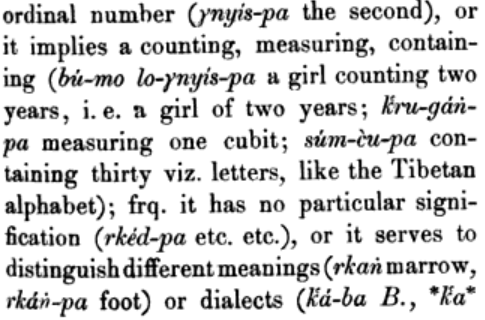 In conclusion, the accepted etymology of sherpa is Tibetan sher (east) and pa (people or inhabitant) but there is a good evidence that sher might be related to lion based on the above findings.

The following source provides futher information on the term which don't actually support your assumption of the origin from persian Sher (lion) pa (leg/foot):

In Tibetan script, the word "Shar-wa" is spelled like this.

From: Sherpa History and Facts

30
What is the origin of "in a jiffy"?
15
What is the origin of "rat"?
10
How common is the term "boondoggle"? And what is its origin?
2
When and by whom was the rule for using 'compare to' versus 'compare with' first recorded?
21
Origin of "It's a fair cop"
8
Why is the English word of Chinese origin "Shih Tzu" used to refer to a dog breed not known in Chinese as "Shih Tzu"?
0
What did "Aryan" mean in the 1930s?
10
When did Asian come to mean only certain parts of Asia such as the East?
5
Origin of "around the bend", meaning insane
6
When did the change occur in meaning of Afghan from an ethnic group to "person from Afghanistan?"