Word like “sirsee” for an unexpected, usually small, gift?

Throughout our marriage, my wife would occasionally come in from shopping and hand me a bag containing an unexpected gift...anything from a small bag of candy to a shirt.

When I'd ask why she got it for me, the word she would use was pronounced "sir'-see". I've tried a variety of spellings, but cannot find a definition that fits those gifts.

Does anyone know what word she's using?

This appears to be slang, concentrated mostly in the Southern US. It is widely reported there, particularly in the Carolinas and Georgia, and its definition is just as you have it.

For example, from the blog The Room Mom:

Because the word is mostly used in informal, oral, contexts, there's not a lot of literary history or evidence, so its orthography is not standardized, and its origins are murky and uncertain.

So, of course, the Internet abounds with speculation. Here's some of the more credible speculation, from the Word Detective:

Do you know where the word “sercy“, “surcy“, “cerci” or “searcy” comes from? Do you have a plausible theory? Do you use it in conversation?

I posed the question to the American Dialect Society mailing list, and received the following reply from Joan Hall, Associate Editor of DARE (Dictionary of American Regional English):

“The Dictionary of American Regional English files have anecdotal evidence for the term “sirsee”¹ (variously spelled “circe,” “circi,” “surcy”) from NC, SC, GA, and PA, as well as two reports from Buffalo, NY and Oklahoma, where the speakers were said to come from “someplace else.”

“All evidence is oral, so the spellings are speakers’ attempts to represent the pronunciation. The etymology is uncertain, but one plausible source is the Scots verb “sussie,” meaning “to take trouble, to care, to bother oneself.” This probably came to Scotland from the French “souci,” meaning “care, trouble.” The term seems to be especially well known in Columbia, SC, where it is strongly associated with a women’s college. Michael Montgomery of the English Department of the University of SC has reported its use there.”

Furthermore, as @Frank pointed out in the comments, a couple of Southern businesses, Surcees.com, a Southern florist, and Charleston Surcees, a caterer, have embedded the word surcee (so spelled) in their names, and they echo the potential etymology based in Scottish and Irish loanwords:

Surcee is a word, used in the South, that is believed to have its origins in the Scotch and Irish who settled in the region. The Scottish word for "surprise" is pronounced much like "surcee" and could be a phonetic form passed down from generation to generation. Another possible origin for the word is from the Irish term "sussie" which means to care.

I happened to be in Charleston the other week, and passed by Charleston Surcees, so I took a couple of pictures of the word used in the wild: 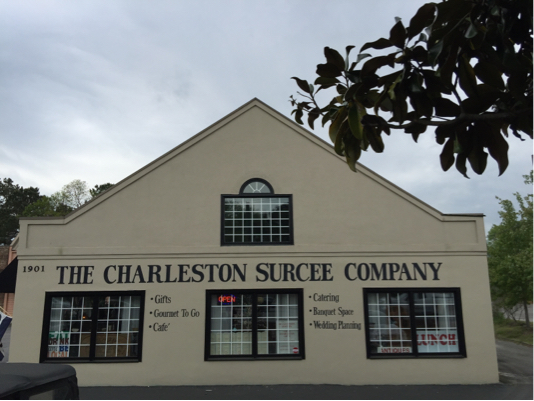 And one of a collection of various surcees, laid out beneath their definition: 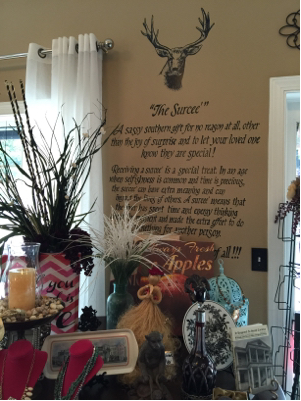 All sources emphasize the word is uniquely Southern.

¹ As indicated, the Dictionary of American Regional English (DARE) does indeed have a headword for "sirsee", but unfortunately one needs a subscription to access its definition and details.

My mother (1919-1960) was from Yemassee, South Carolina, and used the term to describe a thoughtful, unexpected, unnecessary, & inexpensive gift thanking someone for helping resolve a pesky, annoying problem: a figurative pebble in one's shoe. The usual measure was that the help received was absolutely necessary, but relatively and objectively minor, particularly when compared to the problem itself. Like many, I have never seen the term in print and assumed it was a lower-case variation of the mythological Greek sorceress Circe. There's no connection with Circe, but I like the spelling. I suppose "lagniappe" or "cumshaw" comes the closest to the word's meaning.

I had a French girl friend (exchange student) in college that used a word that sounded like "cerci" for a little present or small thoughtful gift. I seem to remember the word was a colloquial french contraction of the phase "cadeau de coeur" which means gift from the heart. It was informal french, usually used only in a family or with a loved one.

I grew up south of New Orleans and often gave or received a sussie - a small thoughtful gift. It was a common expression along the MS and LA gulf coast line. I only heard it pronounced. I always assumed it was spelled sussie (sus see). I have never heard it pronounced sursee. I am sure dialect plays a role in the pronunciation.

Not the answer you're looking for? Browse other questions tagged nouns or ask your own question.

9
A word that means “small gift”?
13
How to express something given to a customer for “free in a non-immoral, non-sexual, non-promoting context”?

7
A word for something you didn't know you'd like
1
Is there an English word for “the cover of a group's photo” on which we can usually write names?
20
Is there a word or expression for a small crush on someone?
9
A word for this cramp-like sensation
8
Word for “invisible god-like voice”
9
Name for a small, central unit of human memory
3
Single word for a “like brothers” relationship
2
Is “reservee” an acceptable word like employee?
9
Word for 'Like a Spiders Web'