What's the word for "too many but not good enough"?

There's a single word that I can't remember what it is.. the word I'm looking for is when there are many choices/points but no substance or not good enough. For example:

The word is not hype nor bells and whistle..

Perhaps mediocre is the word you're looking for, although it doesn't cover the aspect of there being a wide choice available.

of only moderate quality; not very good.

Not exactly a one word solution but seeing the OP excluded the idiom "bells and whistles", I'd like to suggest the following hyphenated compound.

Run-of-the-mill
Something that is run-of-the-mill is a common, everyday, ordinary item that does not stand out from all the rest. In other words, something or someone that is "run-of-the-mill" is probably not notable. (...) 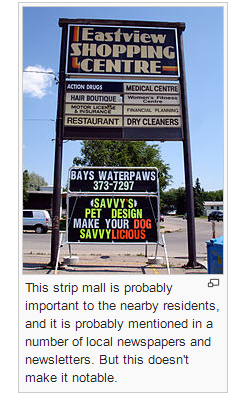 It has already been accepted that professional athletes, regardless of their accomplishments in their field, may receive coverage. But local newspapers also cover high school and college athletes. In every city and town, there are several high schools and colleges and papers that cover them. So inevitably, these athletes will receive coverage.

As for professional sport, each game will receive in-depth coverage from the local papers of the team's city, and at the very least, a box score from papers elsewhere. Each professional sports league has plenty of teams (some have more than 30), and a sports season has many games (Major League Baseball has 162 per season). It is not practical to have an article on every game ever played.

The aspect of there being a wide choice available could perhaps be captured by meaning #2 of "smorgasbord": a large mixture of many different things.

Depending on one's general opinion of the quality of buffet-style, as opposed to sit-down dining, perhaps "smorgasbord" used alone could also capture the "nothing special" aspect of the word you seek, but it's probably going to require adding any one of the good synonyms for "nothing special" given as answers so far:

Several synonyms of "smorgasbord" have a slight degree of built-in negativity (e.g., "hodgepodge" and "ragbag") and you could consider them, but they probably capture more the neutral notion of "random mixture" than the negative notion of "nothing special" that you seek.

commonplace indicates that it also common and also average/mediocre/pedestrian etc.

Edit to add reference - autocompletion from google results the following

Maybe the word you're looking for is mediocre or medium:

To express the sense of quantity over quality the OP is seeking, i'd suggest monotonous or commonplace or perhaps ubiquitous.

Oh! Of course it came after submission. One can have a glut of all the above.

1
Word meaning "of many different kinds" in this context?
2
Is there a term or adjective to describe this plot device?
4
A word for someone asking too many questions..?
3
A word for "too many seemingly correct choices"
5
A good word for a list with too many items
1
Is there a word for wanting more but when getting it, it’s not enough?
1
Word for not recent but not too old
1
What's the single word for "too specific"?
6
Word for one too many items