To have the world "at your fingertips"

I was watching a YouTube video about eating disorders when the American TV presenter ended a pep talk with the following words:

If I had the chance today to spend six weeks somewhere, to better myself and work on whatever addiction it is that I have, whether it's work, whether it's bulimia, anorexia, I would take it at a heartbeat. [Name] you are young, you have the world at your fingertips. It's only going to help you become a better person.

And as soon as I heard that, I thought: "Weird, isn't it to have the world at your feet?

Now, when a person has the world at their feet, it suggests that they have achieved success, accolade and fame. CDO defines it as:

So then I tried looking up to have the world at your fingertips, but surprisingly I didn't find any online dictionaries that listed this figure of speech. I'm sure the presenter's aim was to emphasize the boundless opportunities open to the young woman. She could do or be anything she wanted to be because of her youth, and the "fingertips" represented the act of grasping one's dreams and goals. It reminds me of similar idioms, such as the sky's the limit and Shakespeare's line, the world's mine [your] oyster.

In addition, Google Ngram shows that "at your fingertips" (blue line) took hold sometime in the 1950s, a great deal later than the variant "at your feet" (red line). However, the line chart seems to display a convergence between the two in recent years.

A Google Books search finds an example of the phrase used in this sense in the title of an article about short-wave radio that appears in Boys' Life magazine (October 1953):

The World at Your Fingertips

But the phrase actually goes back several decades before that, with the sense "having everything one might want within reach." Initially, the phrase was a component of longer phrases of the form "the X of the world at [one's] fingertips." For example, from "The Trend of Modern Fiction," in The Advance (April 13, 1905):

One of the most popular fiction writers of the day, Mrs. Humphrey Ward, in her latest novel, introduces as her leading female character a woman who with all the good things of this world at her fingertips leaves her husband and runs away with a poet.

And from a review of John Dillon's Commentaries on the Law of Municipal Corporations in The Yale Law Journal (November 1911):

Quite noticeable also is the large amount of space devoted to the foot-notes. The author has well carried out his purpose of making the book as useful to the village lawyer who is denied access to a good law library, as to the urban counsel with the libraries of the world at his fingertips. This result has not come from a dependence upon unsupported general and abstract statements but from notes which are full enough to be quoted, and from frequent discussion of the leading cases.

She had nothing to say to the pleasant subalterns of the Guards' Brigade nor they to her. Yet she was not left lonely, for elder men—Robert Vere, or Mallinson, of the Exchequer, or a smiling Opposition chief, or some shrewd wit from the cross-benches—liked well enough to slip into a neighboring chair. Val had the political world at her fingertips, for Yarborough talked as freely to her as to West. She was as discreet as her father and as effortless in her discretion: her gossip was colored by a warm humanity: she was more interested in other people's lives than in her own.

The more commanding sense of the term as "having unlimited opportunity or power" comes out in this example, from Will Comfort, Lot & Company (1915), where the person speaking is talking about a baby to the baby's mother:

"He is having his adventures. He will be a great man. He will have the world at his fingertips, when he is as old as we are—and then his real work will begin. For when we know enough of the world, we turn to God."

And again, in a paradoxically deferential-to-the-tastes-of-others context, from Theta Phi Alpha, The Compass (1946) [combined snippets]:

Right now, the main fashion prediction is to dress to please our returning menfolks. No more 'jeans and shirt-tails out'—they saw enough of such things where people had to dress that way because they had nothing else. However, the American woman has the world at her fingertips if she will get away from man-tailored clothes and be feminine again.

Christine Ammer, The American Heritage Dictionary of Idioms (1997), offers this definition for the shorter phrase "at one's fingertips":

at one's fingertips Ready at hand, immediately available. This idiom is used both literally, as in This new dashboard design keeps all the important controls at the driver's fingertips, and figuratively, as in Tom was so familiar with the proposal that he had all the details at his fingertips. [Second half of the 1800s]

Although Ammer doesn't note that "having the world at one's fingertips" can a have a different sense—not just of having all things immediately available but of having them under one's control or power—I think it's useful to recall that the "within reach" meaning of the phrase preceded that other meaning.

Ammer revisits the expression to better effect in The Facts on File Dictionary of Clichés, second edition (2006):

at one's fingertips Ready, instantly available; at one's command. The term refers to both cognizance and competence—that is, it can mean either knowledge or the ability to carry out a task. Presumably it is based on something being as close at hand and familiar as one's own fingers. Its roots may lie in an ancient Roman proverb, "To know [X] as well as one's fingers and toes," which in English became one's fingers' ends (in the proverb collections of John Heywood, John Ray, and others). Fingertips appears to have originated in the United States in the nineteenth century.

Nathan Bailey, Dictionarium Britannicum, or a More Compleat Universal Etymological English Dictionary (1736), has this version of the expression:

To have a Thing at one's Finger's Ends. To be very apt at a thing; to know it perfectly well.

Having the world at your fingertips means you control it; you can do with it what you want.

Having the world at your feet means the world adores you; you can control the world based on their adoration.

The effect can be, and often is, the same. But the meaning is slightly different.

If you have a look at Collins and type fingertip you get a result.

Idioms: have at one's fingertips

Longman DCE online has the complete expression under fingertip.

2 → have something at your/their etc fingertips

The existing answers (and comments) cover the ground well. Until I hit upon this illustration, from the Honolulu Star-Bulletin (Honolulu, Hawaii), 14 Jun 1917, Page 10, 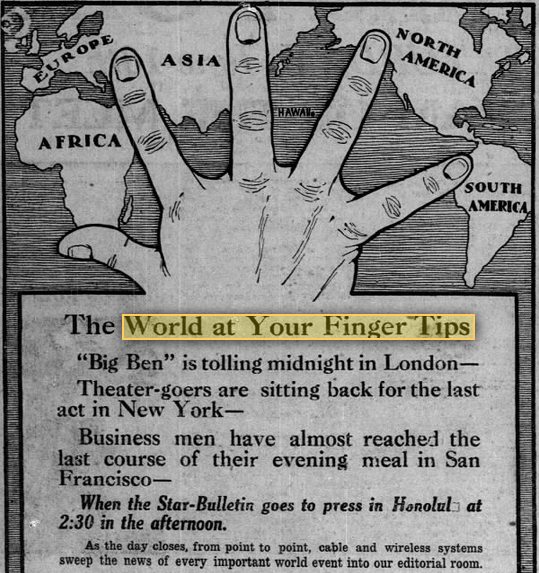 I had little or nothing to add to the chart drawn by, for example, Sven Yargs, with his detailed history of the phrase.

P27. to have the world at one's feet: to have countless opportunities available; to be free to do as one pleases.

From fingertip, n. and adj. Entry updated for the Third Edition, December 2016. Sense first attested 1861 in the Circular, Oneida, NY.

My own research suggests that the core idiom at one's fingertips or at one's finger ends supplemented world and [something of the] world to produce what could be called a splinter or auxiliary idiom. Earlier evidence is lacking, but by the late 1800s such formulations as "...[he] has grown into an active, keen-sighted, enterprising individual, so well posted on matters of commerce that he has, so to speak, the markets of the world at his finger ends" (The Bankers' Magazine, v. 24, 1864; emphasis mine), and "...[I was] disposed to yield the most enthusiastic belief to Defoe's boast that he 'had the world at his finger ends'" (Macmillan's Magazine, v. 38, 1878; emphasis mine), appeared with relative frequency.

I found that when the splinter idiom appeared without [something of the] as the simple the world at one's finger ends, the idiom referred to someone with extensive knowledge of the world. For example, that meaning is clear in the boast attributed to Defoe, and likewise in this from A Boy's Adventures in the West Indies, F. A. Ober, 1888:

[Levi] is the last person one should encounter, if seeking a rest. He is continually beating his brains how he shall make mankind leave his hearthstone and travel. In a word, Levi is the moving factor in the largest 'tourists' agency' in the country. He is the travelling manager, and he has the whole world at his finger ends.

6
Is ‘Not a peep’ an idiom, or just plain statement?
4
Is “have the steel” an idiom in the statement, “Mitt Romney would have the steel to order the 2011 operation that killed Osama bin Laden in Pakistan”?
8
Does “Make for the hills” still hold currency as an idiom?
12
Why is it "have someone wrapped around your LITTLE finger"?
6
What is the origin of "pre-plan"?
8
Why is a young man called “son,” but a young woman is never called “daughter”?
16
The inquisitive tale of “Nosey Parker”
1
To have a leak in your attic
2
Etymology and usage of "enfetter"
1
To have your blinkers on