On the origin and usage of 'mainstream'!

Mainstream is a very common expression mainly used, both as an adjective and a noun, in its figurative sense to refer to:

According to Ngram the expression became more and more popular since the mid 50's, probably with the diffusion of mass media. The term is currently often used in a good number of fields such as music, science, sociology, politics, education etc. to indicate the prevailing trend , but what was the initial context ( in the 50's) where this expression was first consistently used? Or was it just a common term that easily and quickly spread to all direction without a precise context?

An English Anthology of Prose and Poetry, Shewing the Main Stream of English Literature Through Six Centuries 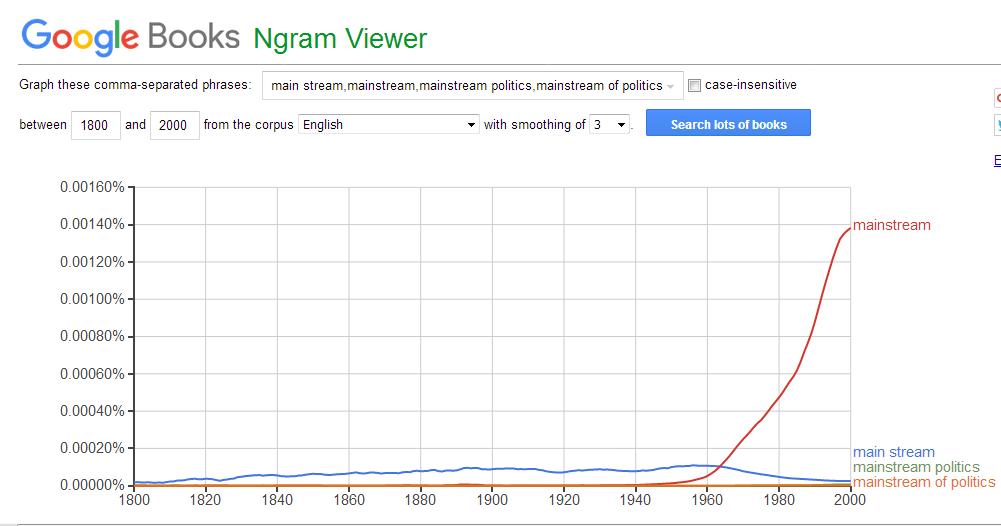 (While uses of "main stream" prior to about 1920 tended to be in the literal river sense, few after that time were.)

It is a natural metaphor, and does not appear to have been strongly associated with any particular political/social movement -- I find uses with science, religion, economics, music, art, literature, et al. And the term has a special meaning in education, where "mainstreaming" refers to placing a "special needs" student in "normal" classes, to the extent possible.

"Mainstream media" didn't really take off until the mid 80s, though Ngram does find one pejorative use in 1958. It's hard to categorize the uses of this term -- it was not often used in the hard-right pejorative sense until the late 90s, but earlier uses were often associated with criticisms of the coverage of women's rights and racial equality issues.

For what it's worth, OED has a specific entry on the figurative use in this sense.

The earliest citation is from 1599, as two separate words.

1599 Warning for Faire Women ii. 3 You have..by gradations seen how we have grown into the main stream of our tragedy.

It cannot be the media but it has got to be related to a 'unifying' event across the world - 'world wars' definitely should be the one. The world was 'bothered' about what it would have considered 'mainstream' event (especially WWII) and it could have considered say Indian independence as 'fringe events'. The United Nations would have been interested in the mainstream events and not surprisingly we see a reference here 'The United Nation in the Mainstream of History' dated 27 April 1956.