What do you call a rope you set to return to an original point?

Say, you don't want to get lost in a tunnel, so you set a rope that leads back to the entrance (or likewise follow another rope set by another person).

I searched for guide rope and guiding rope but I'm not sure whether it's the right word: 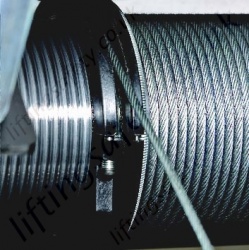 Example sentence (in case it is needed):

The male can find a female miles away, as if they were following a [...]

If you want to be mythological, the term is Ariadne's Thread. When Theseus entered the Labyrinth to kill the minotaur, he unwound a ball of thread given to him by Ariadne. Following the thread allowed him to escape the maze.

Actually, guide rope (or guiderope) makes the most sense and it is easy to understand. It is also used in various contexts for a rope that guides you back.

He lost his light but was still able to pull himself out as he hadn't let go of his guide rope.

Free immersion apnea is a discipline in which the athlete uses the vertical guiderope to pull him or herself down to depth and back to the surface. It is known for its ease compared with the Constant Weight disciplines, while the athlete is still not allowed to release weights (AIDA). [Wikipedia]

Before entering the building, secure one end of the guide rope to a substantial object on the outside. The remaining rope is then carried by one member, designated as the "anchor".

You should deploy a guide rope in any building where disorientation and depletion of air supply are possible. Large-area office building, hospitals and schools are excellent candidates for the guide rope, as are tunnels, ships and subways.

Note: Guide rope has another meaning also but context is everything.

Lifeline is another that could sensibly be used here, though it also has other meanings.

This also has an echo in the thread that in some mythologies connect a body to the soul or spirit, allowing it to find its way back.

[edit: in the example sentence, "wire" would work too, at least for flying creatures like moths, bats: "The male can find a female miles away, as if they were on a wire". Also consider "...as if guided by a beacon", "...as if following a map", etc]

8
The property of something to return to its original state when not being acted upon
1
What do you call a set of elements not including their ends?
2
What to call money set aside for incidental expenses?
7
What do you call the feeling you get when you're satisfied to the point of nausea?
1
What do you call a set of objects that trigger a sequence of events?
10
One word for the Point of No Return?
3
What is it called when for comic effect, behavior and words typical of one situation are used in a different situation?
2
What do you call people who answer to the point? (irritatingly, annoyingly)
1
An adjective meaning that someone's act in a very kind, unexpected way