What word describes something that can move orthogonally and diagonally?

Is there a word for the union of orthogonal and diagonal? If used in a sentence:

And used in another sentence:

I have been doing some academic research in this area. The current coinage, which I think perfectly applies to the movement of the queen in chess, is octilinear. This term has been used to describe metro-map layouts that have followed Harry Beck's paradigm. The vertices of a unit-spaced octilinear grid describe the queen's range of motion (in multiples of 45 degrees; four axes and eight possible directions). So, to complete your sentence:

The queen in chess can move octilinearly. 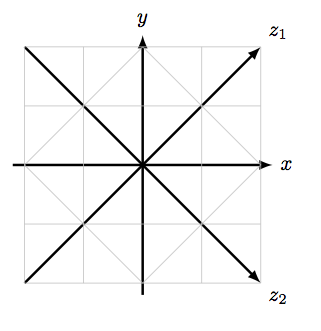 The most recent journal paper in the schematic mapping field is: Octilinear Force-Directed Layout with Mental Map Preservation for Schematic Diagrams. And a search on Google scholar will show that octilinear is now a widely-accepted term, that hopefully will move into mainstream vocabulary!

Well, this is a coinage opportunity, although perhaps, given that octolinear has sneaked in first, a fading one.

As a straightforward composition in the German tradition of piling together existing words, we could say that a queen moves orthodiagonally. As Scott Centoni observed, this might support extension into higher dimensions also.

As an imagery-based coinage to support the idea of the queen's move to other applications, you could say that the queen in chess moves majestically. So does the king, but more slowly.

And then Jimi Oke's referenced paper could talk about about Majestic Force-Directed Layout...

For lack of a better (i.e. existing) word, I'd probably use octantally

Technically this word is an adjective but I see no reason why it could not be applied as an adverb in this context per the first part of definition #3 below.

I would prefer the term "Holonomic" from the robotics realm.

If you have a robot base that can move in any direction from any orientation, this type of drive is often called holonomic.

A short phrase might be in a straight line.

If you want a single word, how about queen-style?

While there are infinitely many directions, your pet robot can only move queen-style.

Of course, this doesn't work when describing Chess rules.

I haven't heard this before, but I wonder whether the queen can move panoramically ?

4
A word to describe vertical and horizontal movement?