Parts of speech and functions: "Bob made a book collector happy the other day"

Having been bamboozled by various questions and answers on this site, I'd like to know what are the parts of speech (POS) and grammatical functions of the words and phrases in the following sentence:

Here I am particular interested in the status of the following items:

But I also need the parts of speech and functions of all the individual words in the sentence. By functions I mean subject, complement and the like. I would also like to know the evidence for the assignments to specific functions and parts of speech.

The reason for asking this question is because the status of the three items listed above may be thought contentious by some people. For example, it might be argued by some that book is an adjective, whilst others will say it is a noun. Similarly, the other day some will argue is an adverb. Whether adverb here should be regarded as a function or part of speech in such analyses seems unclear.

Although this question almost feels like three questions in one, I will try to answer all three parts — and the general question concerning the whole sentence as well.

In the noun phrase book collector, the noun book is a noun adjunct, it is used attributively. A common way of expressing this is to say that book is used as an adjective, but this does not mean that the noun is an adjective. It just plays a similar role.

Looking up attributive noun, we find, for example, Merriam-Webster telling us about the label attributive used in dictionaries:

Nouns used in this way are often said to be adjectives or act as an adjective. However, they are not. Adjectives do things that these nouns do not:

In the answers to this question some more arguments are listed.

This is an adjective. It modifies the noun (phrase) book collector. As we can see in this explanation from perfect English grammar about using make and let, this is a very simple construction where we use subject + make + object + adjective to mean “cause the object to be the adjective”:

We can also use subject + make + object + adjective. This means 'cause the object to be the adjective' (the adjective can be good or bad):
• Her story made me really happy.
• The traffic jam made us late.

This is not an adverb, but a noun phrase that is used as an time adverbial.

The British Council teaches us about adverbials of time:

We use adverbials of time to say:

• when something happened
• for how long
• how often (frequency)

We often use a noun phrase as a time adverbial

Bob made a book collector happy the other day.

The noun phrases can be further taken apart as follows:

Parts of speech are categories, their members sharing various properties. One of these properties is the functions that the members can perform. These functions are relations, and each should be capable of coming before of. For example, in book collector, book is a dependent (more specifically an attributive modifier) of office. It generally makes no sense to say that something is a noun of or verb of.

If we look at families. Man and woman are categories (like parts of speech). You can see a man or woman outside of a family situation and generally still put them in the right category based on various properties such as facial hair, breasts, size, voice, etc. One of the properties of men is that they can function as 'husband of', 'brother of', 'parent of'. Women can be distinguished from men partly in their inability to function as 'husband of' or 'brother of', but both men and women can function as 'parent of'.

Back to words, the members of the category of English nouns share a range of properties, not just the relations into which they enter. They (typically) inflect for number, and many name concrete objects. Adjectives have other properties, like inflecting for grade (tall, taller, tallest). Number and gradability are distinguishing characteristics, but functioning as 'attributive modifier of' nouns is a shared characteristic. Only when book takes on more characteristics of adjectives such as becoming gradable (booker, bookest; like fun--traditionally a noun--being inflected funner and funnest) would we say that it actually now belongs (also) to that new category.

Here, as always, happy is an adjective (it inflects for grade: happier, happiest), but its function is not attributive modifier but rather the predicative complement of make. Here, we could say also she made the book collector president, and president would similarly be the predicative complement of make. Finally, the other day is a noun phrase (it's headed by a noun & can function as a subject of a verb). It's not an adverb (it can't be modified by very, it doesn't inflect with -ly). It is an adjunct of make.

There are many more properties of adjectives, nouns, etc, but it would be too much to discuss here. Suffice it to say you need to look at more than simply the relations something enters into.

Book collector is a noun+noun compound.

Happy is an adjective.

The other day​ is a noun phrase.

The example expression can be redistributed in the following structure:

Each phrase serving one of the above mentioned purpose is further sub-divided in to individual parts of speech.

Structure of an expression can be deduced by understanding the following: 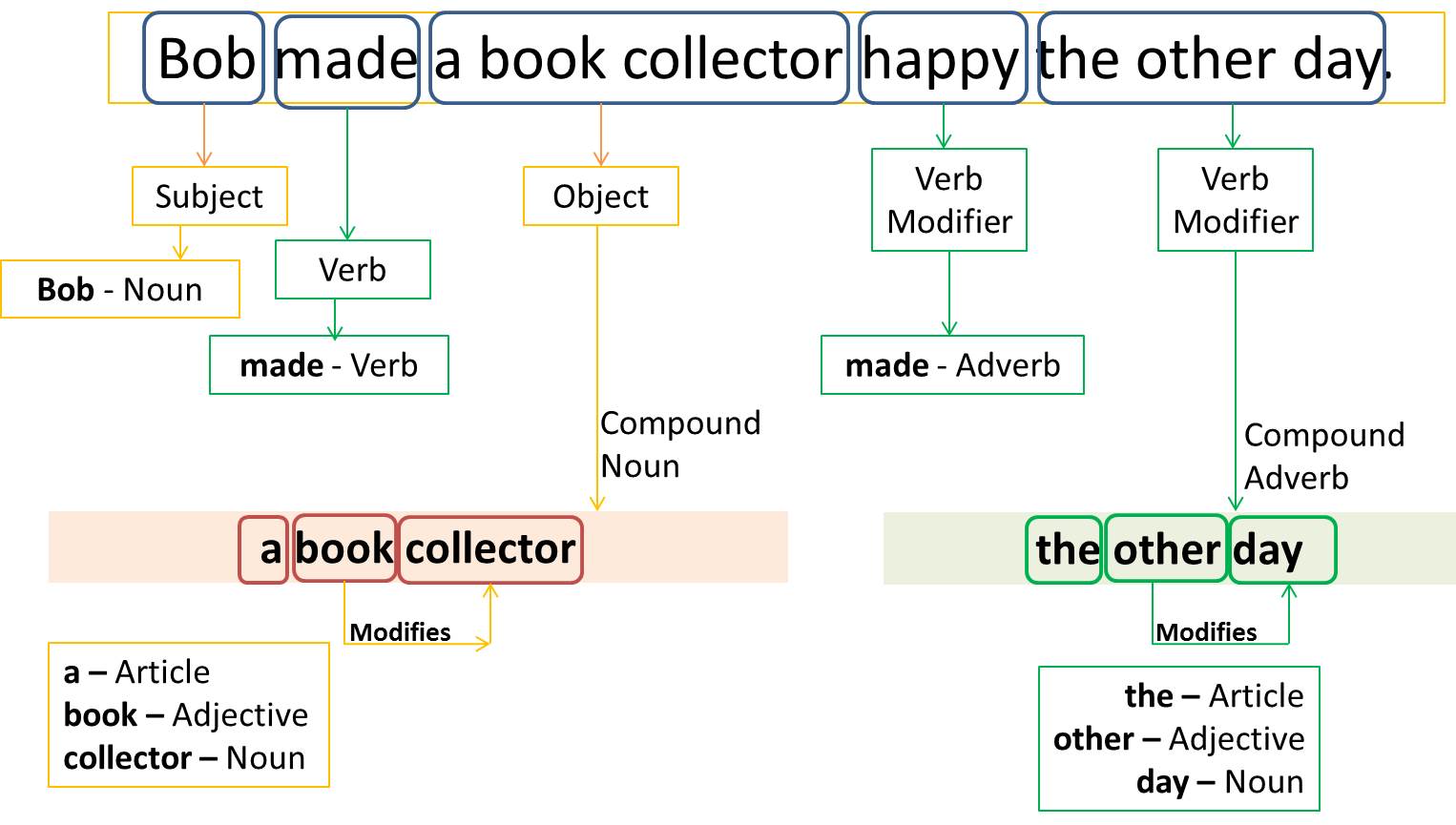 I'll tackle this by identifying the right questions and proposing precise answers. Expression: Bob made a book collector happy the other day.

'A' is the indefinite article. An indefinite article points to nonspecific objects, things, or persons that are not distinguished from the other members of a class. Essentially, articles are Adjectives as they point to a noun.

To delve deeper in to the nuances, 'book collector' is a Noun phrase or Noun-equivalent. Source:Chicago Manual of Style - Noun-equivalents and substantives

Looking in to the terms individually: 'The' acts as the 'definite article to 'other day'and acts as an adjective. More on the topic: Purdue University OWL: Using Articles 'day' is the time when this occured. It is a Noun. 'other' tells us about the day. It is an Adjective.

PS: Thank you for the rep points. I've successfully added a detailed image and links to cite. Thanks for the workout. Please review and suggest updates. Edit: *Formatting, Structuring, Adding information

It seems, from the top two answers here by Brett and Oerkelens, that the functions and parts of speech of this sentence are two completely different types of thing . So, we can have nouns, for example, functioning as subjects, objects or temporal adjuncts (read "adverbials"). It should be possible therefore to do an analysis of the sentence solely in terms of its functions, or solely in terms of the parts of speech. Here, then, is my own attempt. I have capitalized the names of functions, in order to distinguish them from parts of speech. [Sorry about the lack of binary branching in the trees, I couldn't get the software to play ball!]

The verb phrase: made a book collector happy the other day

The noun phrase: a book collector:

The noun phrase: the other day:

Evidence: We can show that Bob is the Subject, because if we make an emphatic version of the sentence, the auxiliary did will appear directly after the Subject. Secondly if we then make a yes/no question the Subject and auxiliary will change places:

By default the Predicate is everything else in the sentence. Within the Predicate, we know that made must be the predicator, because in English this function is reserved only for verbs. We can show that a book collector is an object because if we passivise the sentence it will become the Subject of the new sentence:

Because happy describes another complement of the verb ( - the book collector), we take it to be a Predicative Complement.

We can show that other is a modifier (adjunct in some grammars) and not a complement, because the noun phrase is perfectly well-formed without this word:

Evidence: Bob is a name, and therefore a proper noun. Like other nouns it can be genitively inflected:

In addition, adjectives usually have comparative forms, whilst nouns do not:

Notice as well that book can function freely as the head word of a subject or object phrase.

Collector is uncontroversially a noun. But we can show that it inflects for number etc: collectors.

We can use the same tests for the that we used for a. The word other is a bit controversial. We have shown that it is functioning as a modifier. It looks like an adjective here because it occurs after the Determinative and before the Head of the noun phrase. However, it cannot be modified by adverbs: the extremely other day. Also it cannot function as a predicative complement:

Like other determiners, it seems to have slightly deictic properties.

Day is uncontroversially a noun. It inflects for number, appears with determiners such as every or other. It is modifiable by adjectives, postmodifiable by preposition phrases and so forth:

Here we see day modified by the adjective sunny, and occurring with determiners. We could also have:

Here we see day inflected for grammatical number and post-modified by the preposition phrase per week.

Notice that the function that the noun book has ( - namely modifier or adjunct in a noun phrase) does not affect the part of speech. Neither does the other day become an adverb or adverb phrase, just because it is an adjunct (read "adverbial"). The head word in the phrase is the noun day, and it is therefore, of course, a NOUN PHRASE.

Not the answer you're looking for? Browse other questions tagged grammar adjectives parts-of-speech functions or ask your own question.

0
In "X number", should X be singular?
10
Is this noun used as an adjective?
7
Adjectives versus Noun Adjuncts
2
A weird case : "The kitchen’s window" vs "The kitchen window"
5
True meaning of these 'adverbials'