How did the adjective “just” come to take on so many adverbial meanings?

Just is a pretty useful adverb. It can carry several different meanings:

(With thanks to Dictionary.com and Merriam-Webster Online for these examples.)

There are also a variety of phrases using just, including just so and just about. I’m sure I haven’t covered everything here.

I’m curious about how we got all these adverbial senses of just. I checked the Online Etymology Dictionary for just and found this:

“merely, barely,” 1660s, from Middle English sense of “exactly, precisely, punctually” (c.1400), from just (adj.), and paralleling the adverbial use of French juste. Just-so story first attested 1902 in Kipling, from the expression just so “exactly that, in that very way” (1751).

How the heck did the adjective just spawn such diverse adverbial meanings?

Take for example long : it mean 'extended' and has a different meaning if you refer it to time or to space.

just expresses the general idea of

"It is impossible to say just what I mean!" (T.S. Eliot) or, more loosely,

"It is ridiculous to think you can spend your entire life with just one person" (The Observer), ( "Bob was just a dishwasher until he met George Lucas").

It is as simple as that!

(the examples are from SOED)

You've indicated three general meanings that might apply to some, but not all, of the more specific meanings I listed in the initial question (how to account for "possibly," "quite or very," and "directly"?). Also, I find it interesting that two of the general ideas you've indicated contradict each other: "neither more nor less" and "a little more or less." That's worth a question in and of itself. So, yeah, a little disappointed. – Rusty Tuba

I have indicated just one meaning, if you reflect just a bit, you'll see no contradiction between exactly (neither more nor less, quite,.. etc) and almost exactly (a little more/less... etc), it is only approximation, which is a natural feature of language. Bearing this in mind, you'll be able to clarify all other optical illusions. I didn't list all possibilities because it is not a closed list.

Firstly a quick journey back to roots...

'Just', in modern English usage meaning 'exactly or only', and 'closely or proximately in space, quantity or time', as EL&U member GreenRay points out.

from: Old French 'juste' , meaning as above (Wiktionary - https://en.wiktionary.org/wiki/juste)

Note that the 'closely or proximate' meaning now included in the many senses of the word 'just' isn't reflected in the origins of the word, and seems to be quite at odds with the sense of 'exact' that is implied by the Latin root 'iustus'. The OED simply notes that the adverbial use of the French 'juste' included such meanings as 'exactly', 'precisely', 'verily', 'actually', and 'closely'. The meaning, closely seems somewhat at odds with the other senses of the French adverb. The question might be asked, did something happen to the word during its development in French?

It is quite feasible that a simple drift in the use of language accounted for the broadening of the sense of the word 'just' to incorporate 'close to' or 'almost'. However, the OED's entry for the word 'adjust' makes an interesting observation (noting that we will be coming back to the word 'just' after this small digression):

adjust adjust, v.
(əˈdʒʌst)
[a. 16th c. Fr. adjuste-r (now ajuster). The OFr. ajuster, ajoster, ajouster = It. aggiustare, aggiostare (:—late L. adjuxtāre), gave rise to a med.L. adjustare, which was naturally, though erroneously, taken as a derivative of ad + jūstus, and so consciously used. After Fr. ajouster became ajouter, so that its formal relationship to aggiustare and adjustare was lost sight of, a new Fr. adjuster was formed after the latter, and received those senses of ajouster, which seemed to approach to L. jūstus, Fr. juste. In It. and Sp. also the mod. sense of aggiustare, ajustar, has been influenced by association with jūstus. Thus mod.Fr. ajuster may be viewed as a refashioning or re-forming of OFr. ajouster:—adjuxtāre, after à+ juste. See also adjoust.]

If we follow the Latin 'juxta' we start to get meanings very similar to some of those non-exact senses of the French adverb 'juste' (http://tinyurl.com/nvbkk3d):

So the interesting speculation is whether the French might have roughly handled the word 'juste' in the same way they misattributed and re-fashioned their understanding of the word 'adjust' . Could the Latin meaning of 'juxta' (near to) have leaked into the French word 'juste' in the same way the the sense of 'justus' (exact, righteous) had leaked into the French word 'adjust' which was properly derived from the Latin adjuxtāre (near to) as attested by the OED?

We might thicken the soup by mentioning at this point that the English word 'joust' used to be written as 'just' and spoken to rhyme with the word 'must'. 'Joust' is derived from the Latin 'juxtā', as the OED has it:

So to sum it up, I believe that GreenRay is correct in the sense that most of the meanings can be summarised as 'exactly or only', or 'closely or proximately in space, quantity or time'. But the contradiction between these two senses, as Rusty Tuba has pointed out, is difficult to put aside without comment. How can the word 'just' mean 'exactly', but at the same time also being used to mean 'almost' or 'proximate'?

However, if words derived from the Latin 'justus' (exact) and from 'juxto' (proximate) have over the ages shared spellings and pronounciation - as indicated above - then there may have been even more instances of erroneous derivation and attribution and 'meanings influenced by association' than the OED has so far mentioned. Perhaps that massively polysemous (thank you John Lawler) word 'just' has also drawn some of its meaning from the Latin 'juxtā', in addition to the meaning it inherited from its proper root, the Latin 'iusta'.

If the OP is interested, for the sum of just $30 he can buy a copy of the following article by Jeffrey M. Kishner and Raymond W. Gibbs Jr:

How “Just” Gets Its Meanings: Polysemy and Context in Psychological Semantics

The adverb just is polysemous in having several related senses (e.g., It's just a cold; I just notice it at night; or I love cookies, just as you love cake). We present three studies looking at how readers determine the appropriate sense of just in context. The first study analyzed 871 naturalistic sentence contexts containing just, and revealed six senses for the adverb as well as some interesting patterns in which particular classes of words regularly followed particular senses of just.

Just a year ago, (Dec 28 '14), John Lawler commented: Just is massively polysemous in modern English, but all the meanings are related.

Let's look at how or why just come to mean ‘exactly’, ‘accurately’, and ‘precisely’.

Under the entry of just, p638, the OED lists an obsolete meaning of the noun (sb.= substantive). [Emphasis in bold mine]

It cites this example

In the poem Piers Plowman, written between 1370-90, the now-obsolete word was spelled iuyste

The expression iuyste wombe stands for ‘pot belly’, iurdan probably referred to a friar named William Jordan but was also Middle English for ‘chamber-pot’ thus Langland was making a joke: ‘You will chatter to this Jordan/chamber pot, he with the pot belly’ C.15.91 (source)

The author of A Dictionary of Weights and Measures for the British Isles says that the 13th century term for a type of pitcher was called a just, derived from the Latin justa/iūstus meaning just; right; legal and fair. The quantity of liquid a ‘just’ contained was 1½ gallons.

This explains the adverbial meanings of just: at that precise location or point; in the exact quantity, which the OED lists:

c. Of manner. just as = precisely in the way that, in the very way that. just so, (a) precisely in that way; exactly as has been said; (b) in the required or appropriate manner; (c) very close or friendly; (d) neatly and tidily;
[examples omitted]

If the noun just stood for the right measure, the precise quantity of an alcoholic beverage, then over time, speakers would use the term just as an adverb to mean "no more no less"; precisely; exactly, and so on.

Since it was so difficult to measure anything with accuracy, medieval Europe became obsessed with the laws governing weights and measurements. During this period, one of the most common infractions was the use of ale pitchers that were too small. Beer was sold in public houses and alewives were fined on almost a daily basis for claiming one volume while actually selling a smaller one.

Until the eighteenth century, it was very difficult to measure the capacity of a container accurately in cubic units, so the standard containers were defined by specifying the weight of a particular substance, such as wheat or beer, that they could carry. Thus the gallon was originally the volume of eight pounds of wheat. This custom led to a multiplicity of units, as different commodities were carried in containers of slightly different sizes.

I offer these examples of medieval English pottery containers for decanting and serving wine or beer. 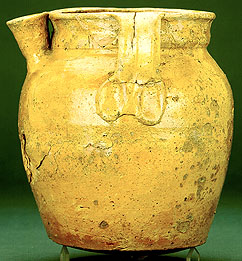 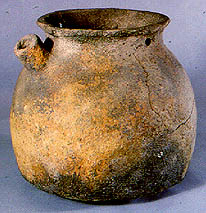 The word "just" can be considered literal (and immediate), as noted in the etymological citation ("exactly, precisely, punctually"). Let's try that in your examples (asterisks are explained later):

Distinguishing between "just [barely] missed" and "just [recently] finished" may be complicated in some cases, but they're also somewhat interchangeable; "you're looking for Bob? You just barely missed him" could as easily end with "you just recently missed him" and have the same meaning. In other cases, it's not ambiguous at all; throwing a snowball isn't typically discussed in time-sensitive context – when it is, there's motion involved (e.g. the target is moving) and it was likely still a near miss.

(I preferred the look/sound of "literal" even though it sometimes means "figurative" these days; feel free to read that as "exactly" or "precisely" instead, it should have the same effect.)

as an adverb, is first recorded in XV century, (with meanings that are now long obsolete), in the Latin form iust[e], which is conserved (for all meanings) through centuries :

The first occurrence of the word iust (as an adjective) with the original sense is in XIV century:

The meaning of the adverb is from the very beginning: very closely, [almost] exactly , and here is the detailed chronological development of the various usages as recorded by OED. You can easily see that no important information is added to my previous answer:

The Anglo-Saxon equivalent right was used since early OE (ri[h]ht) with the meaning of 'exactly/ thoroughly':

It can substitute just in many contexts expecially modifying adverbs and prepositional phrases expressing time/ place:

Not the answer you're looking for? Browse other questions tagged etymology usage adverbs historical-change zero-derivation or ask your own question.

2
Ambiguity of “just” in a context
1
what is the difference between the following 2 sentences in their meaning regarding the word 'just'?