Does anyone know a dictionary (or other resource) that traces the etymologies of words in such detail as to show how two, three ... different meanings may have come to apply to a given word?

This question has come up many times before, and today came up in the word "catamaran," which somehow means a "two-hulled boat" or "yoked boats" but also a "quarrelsome woman."

Knowing the Tamil origin, "kattumaram" for "tied wood," isn't helpful for the latter sense. I don't want a dictionary merely listing polysemes (most do), but an historical tracing of how they came to be.

There is no one, single such resource. Often it takes a lot of work. You can start with Online Etymology, good for basics. However, it won't list the second meaning of catamaran, as is also the case for many dictionaries, because it was a colloquilalism used around the turn of the last century.

Dictionary.com defines it: 3. (old-fashioned) a quarrelsome woman, as does Collins, but no origin is given. Merriam Webster and some others doesn't list it at all.

The word catamaran was introduced into the English language by the explorer/naturalist/buccaneer William Dampier (1651–1715).

Brewer's Dictionary of Phrase & Fable lists it as

A colloquial term for a quarrelsome old woman, so called from a pun on ‘cat’.

The closest to origins that I could come are a guess based on a Wikipedia entry for fish wife, and a really obscure book. From Wikipedia:

Often the wives and daughters of fishermen, fish wives were notoriously loud and foul-mouthed, as noted in the expression, To swear like a fishwife. One reason for their outspokenness is that their wares were highly perishable and so lost value if not sold quickly. In the 18th century, fishwives frequently appeared in satires as fearsome scourges of fops and foreigners. Their vigorous and decisive mien was contrasted with that of politicians who were, by contrast, portrayed as vacillating and weak. For example, in Isaac Cruikshank's A New Catamaran Expedition!!!, a fleet of fishwives sails across the Channel to terrify the French and shame the Prime Minister, William Pitt.

This was published by Wm. Holland in 1805. Clearly by then, fishwives were referred to as catamarans even though their boat clearly is not. 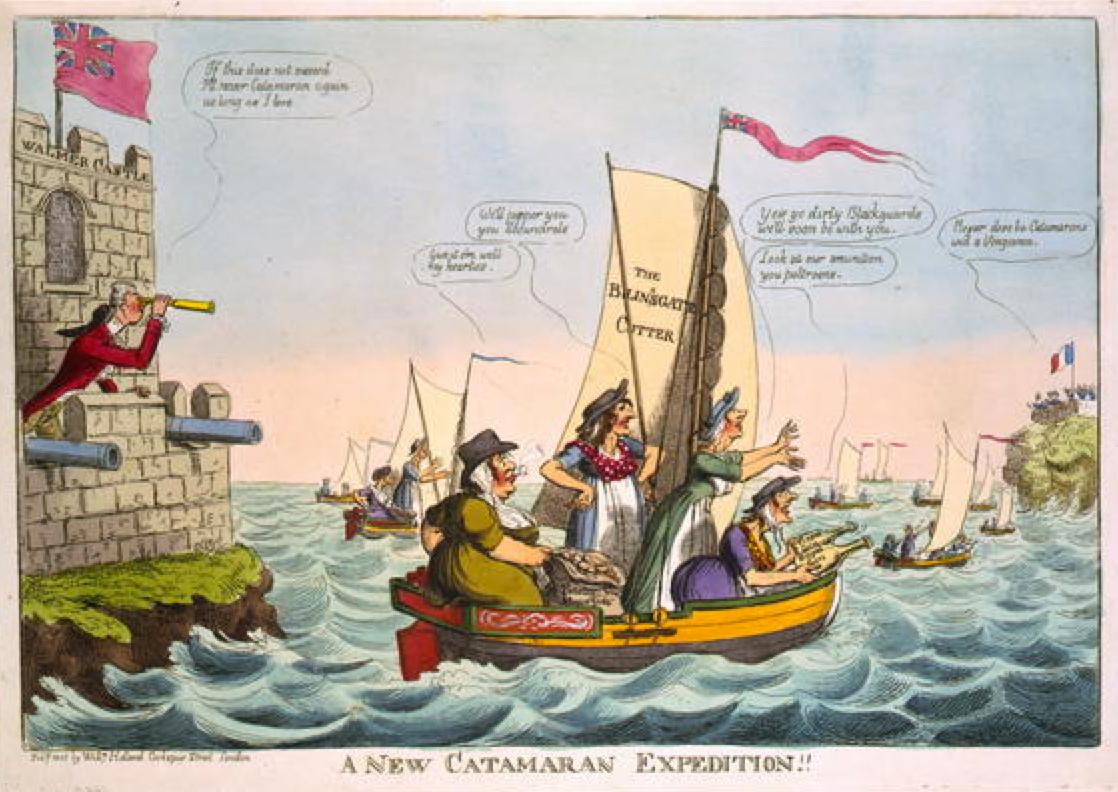 From SLANG ANALOGUES PAST AND PRESENT. A DICTIONARY, HISTORICAL AND COMPARATIVE, OF THE HETERODOX SPEECH OF ALL CLASSES OF SOCIETY FOR MORE THAN THREE HUNDRED YEARS. WITH SYNONYMS IN ENGLISH, FRENCH, GERMAN, ITALIAN, ETC. (caps not mine) COMPILED AND EDITED BY JOHN S. FARMER and W. E. HENLEY. VOL. II. C. TO Fizzle 1891

First, they address (under catamaran) the words "Cat in a pan":

c. 1720. Song, The Vicar of Bray. "When George in pudding time came in/ And moderate men looked big, sir/ He TURNED A CAT-IN-PAN once more/ And so became a Whig, sir."

phr. (popular). To 'have a mouth' after drunkenness.

CATAMARAN, subs, (colloquial). A vixenish old woman ; also a cross- grained person of either sex. _Cf., CATAMOUNT. Probably associated with the colloquial use of CAT, a quarrelsome, vicious woman]. For synonyms, see GEEZER.

CATAMOUNT, C ATA MOUNTAIN, or CAT O' MOUNTAIN, subs. (American). A shrew [see above CATAMARAN and Beaumont and Fletcher's use of the word for a wild man from the mountains, itself a transferred sense of catamount = a leopard or panther.]

So you see, it's not that easy. Easy ones are easy to find. The hard ones (like this one) take a lot of searching, especially when the word has fallen out of usage.

Another good place to look is the Oxford English Dictionary (OED) since the entries are pretty long and detailed and include quotes showing how the word has been used over time.

Really good dictionaries, like the OED, do give the development of polysemy in a particular word. The OED in particular orders its multiple definitions ('semes' or different meanings) not by popularity/frequency of use but instead by date of appearance, oldest first.

If you want some sort of chart of the semantic development, with all the twists and turns, and multiple influences and uses in dialect and literature, and the connections of all the nuances and connotations for a particular word, then I think you'll have to look for that kind of thing in research papers, if it exists at all.

It just happens to turn out that the particular question you're asking, about 'catamaran', is just so recent a development, that it hasn't been added in to most dictionaries.

So what you are seeking in general does exist in particular dictionaries (at least in the OED), but not yet for the particular term 'catamaran' that you care about.

I can provide an analysis and explanation of common German polysemes, if you are interested. As you will see, the origin of the polyseme varies. It includes a change of spelling, a collision with an adopted foreign word, an extension of concept e.g. purse-salary, an extension of concept for technical terms e.g. sieve-filter, confusion of apposition and poetic use e.g.sight-vision. Contact me at pwright92000@yahoo.com.au if you wish.

Not the answer you're looking for? Browse other questions tagged etymology dictionaries homonyms or ask your own question.

5
Source for etymological study
3
Is there a specific word for a list of [word + how to use it in a sentence]?
1
What's the evolution of the phrase “milk it for all its worth”?
2
source for “buff”?
2
Is Shakespeare really the source of our modern meaning for odd?
2
Is there a term for the convergent evolution of homonyms?
7
Term for words that are modified by prefixing the word with “a” (e.g. anew, aplenty)
10
What is the 1896 source for the origin of “dyke”?