I'm reading an old history book about my ancestors entitled "Rulewater And Its People: An Account Of The Valley Of The Rule And Its Inhabitants" published in 1907 by George Tancred. In it, I'm having problems understanding a sentence, italicized below:

The King issued a peremptory order for all Turnbulls in the district to submit themselves to the King's authority. The principal men of the clan immediately made their submission, coming before him in linen sheets, with withies about their necks, and put themselves 'in the king's will,' as it was termed. It is said that the King ordered every tenth man to suffer death.

Looking up withies gives me (from here)

My initial thought was that "in the king's will" was a pun on "will". As in somehow my ancestors got themselves written into the king's last will and testament. Now that I see the definition, I wonder if "will" could mean a plant owned by the king? As in how game was owned by the king in the past?

I'd really like to know what my ancestors did, why it was presumably funny to them, and why it irritated the King so much. If it helps, this took place during the reign of King James IV around 1510.

Also interestingly, the word "king" in 'in the king's will' is NOT capitalized, I just double checked. So its not The King its just king. Not sure if this is a typo or an important clue.

I don't think there is any joke at all (or I might have missed it altogether).

Requesting that the most important notables of a city would turn themselves in to the mercy of the King in linen and with a noose around their neck is not unheard of.

The most famous examples actually comes from the reddition of Calais in 1387 to Edward III. This is the subject of a famous sculpture by Rodin of which there are several versions. 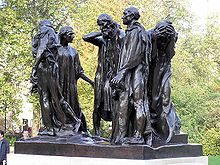 After a long siege...

...Edward offered to spare the people of the city if any six of its top leaders would surrender themselves to him, presumably to be executed. Edward demanded that they walk out almost naked, wearing nooses around their necks, and carrying the keys to the city and castle 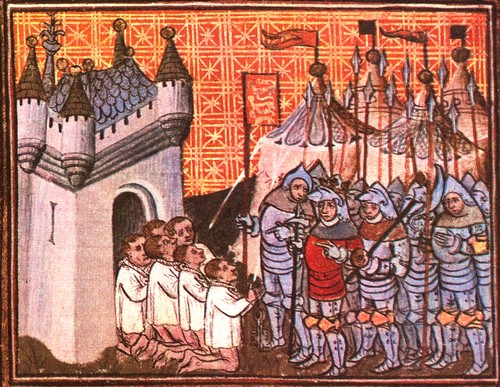 One way of seeing it that the "Turnbulls" re-enacted the scene in a hint to that famous episode.

I think the "will" here means "wish, desire, decision, choice" and so on. It means they were submitting to the King, putting themselves at his disposal, to do with as he pleased. Obviously he was pleased to put a sizable portion of them to death. Probably what confuses the issue is the preposition in, which we would not use today in conjunction with will. We would probably say "at the King's will" now.

Not the answer you're looking for? Browse other questions tagged etymology sentence archaicisms or ask your own question.