Is there a word or expression for when someone passionately wants something, and then discovers afterwards that it's different from how he imagined?

Is there a word or expression to describe when someone passionately wants something, eventually gets it, and then discovers that it isn't what he thought it was?

For example, suppose that John is a high-school student who admires the football team. He dreams of becoming a football player, thinking of how popular and sexy he would be if only he could be on the team. Then, one day, he is able to join the team, and he immediately regrets his dream because playing football is so much harder than he could have imagined.

For another example, suppose that Kaylee has a life-long dream to visit some exotic land. After years of effort, she saves enough money and makes the right connections to make the trip. Upon her arrival, she is immediately devastated by how primitive the accommodations are and how she has no access to the comforts of life she had taken for granted at home.

Edit: Thanks for the great answers and suggestions. It seems that there are a number of different words and phrases for this, each with somewhat different meaning.

I would go with disillusionment.

A feeling of disappointment, akin to depression, arising from the realization that something is not what it was expected or believed to be, possibly accompanied by philosophical angst from having one's beliefs challenged.

An example from vocabulary.com:

Disillusionment is when the hard truth of reality makes you lose faith in your dreams and ideals. Like you might have thought your internship at the movie studio would be super glamorous, but you quickly suffered some disillusionment when you realized it involved 14-hour days and lots of coffee runs.

A deep distinction between disillusionment and disappointment from the book "The Poetics of Disappointment: Wordsworth to Ashbery" By Quinney: 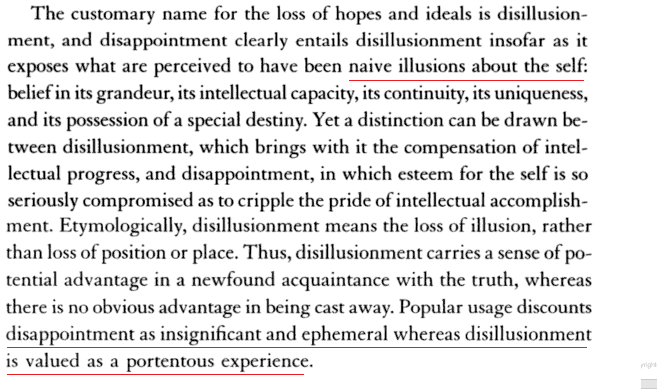 is the sense of regret after having made a purchase.

Even if it was the trip of a lifetime, you'd be lucky (though, irresponsible) to not feel a tinge of remorse at having spent your lifesaving's.

Aw, man. I thought this was going to be easy.

"Disenchanted" is another one. It strikes me as somewhat less deep and abiding than "disillusioned", and may be a good fit for the OP's examples.

The term crestfallen comes to mind for me

The proverb: "The grass is always greener on the other side (of the fence)".

Something may seem fantastic, but never as good as they appear from a distance. The expression particularly refers to wanting something that someone else has, or wanting to emulate a particular person.

There are a few concepts in your question...You seem to be looking for a word that describes a person with a desire for something in the future, a realization of that desire, and disappointment in the fulfillment of said desire.

There are 2 halves to this concept; A desire for something in the future, and disappointment with how things turned out in the past. I don't know of any single words with that kind of temporal purview.

That said, if you break your question up into 2 concepts it becomes easy to describe the 2 halves of the situation.

'Unrealistic expectations': This might be used to point out that a person's expectations are incongruous with the likely outcome.

'Disappointment': This is used to describe dissatisfaction with the non-fulfillment of one's desires.

You could say it didn't live up to her expectations.

dis·con·tent·ed is a word that could be used to describe the craving for obtainment of a desired object, only later to find out that there is a lack of interest in the said object after it's realization.

Be Careful What You Wish For, of course.

Be careful what you wish for (ELL)

The entry for "wish" in OAAD gives an example:

Be careful what you wish for. You just might get it (= and find that you really don't want it).

The idiom “be careful what you wish for” is often used as a type of warning to people who are wishing for one thing, but might not realize all the negative consequences that could accompany obtaining that wish. Sometimes, the saying is followed by “it might come true,” “lest it come true,” “you may receive it,” “you just might get it,” or some other similar ending phrase. Due to the contradictory meaning of those two phrases, their combination might confuse those who have never heard the idiom in its entirety. Of course, whether the idiom provides a certain truth is entirely up to the situation. Often, the contradictory nature of the idiom does not negate the real warning it provides.

Like many idiomatic expressions, “be careful what you wish for” can be used in numerous everyday life situations. Usually, examples of appropriate times to use it combine a good outcome with a negative consequence. In other words, the person gets his wish, but it is accompanied by a negative result, too.

Idiom Definitions for 'Be careful what you wish for'

If you get things that you desire, there may be unforeseen and unpleasant consequences.

You could also address her dreams rather than herself. "She found her dreams were misbegotten."

"The bright fantasies of her anticipation turned to stygian reality as she scuttled across the the dull black tarmac. Her plans had been illusions, now stripped from her at every step. "

"frustration" is perhaps the best fit. -

"When she realized the "vacation paradise" was nothing like she had imagined, she was filled with intense frustration."

"She had a look of profound disappointment when she heard the wedding had been cancelled."

"To my dismay, I did not get chosen for the job." Merriam-Webster

3
Word for a source of mental-strength
1
Using someone for a specific purpose and then discarding them right afterwards
11
What is the name of that feeling when one discovers that there is something "most others know that I didn't know"?
3
Is there a word for when people secretly want to fail at something they're doing?
1
What is it called when someone only wants something that is highly desired by someone else?
38
"My colleague's body is amazing"
1
Word for when you're looking for something and it's in your hand
13
Word for "when someone does something good for you and then mentions it persistently afterwards"