Google has a new doodle that says ’Tis the season when you put your cursor on it: 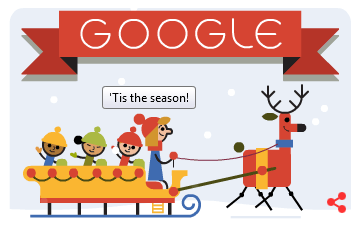 What is the origin of this usage? or even the contraction ’tis?

There is a popular carol called “Deck the Halls” or “Deck the Hall” that has this line. Can we say that ’Tis the season originates from this carol or does it go far back?

It typically refers to the time before Christmas, which can be defined as anywhere from October to December 24th.

'Tis is a contraction of it is. I think these kind of contractions are archaic but it is still used in stock uses like:

’Twas the night before Christmas
’Tis the season

Etymonline doesn’t have much to say about the origin of this contraction:

Is it possible to find the origin and first usage of this contraction?

Its usage is certainly literary and archaic. NGram: curiously shows that its usage peaked in the 18th century, and decreased steadily since then. Unluckily, Ngran does not offer instances of usage earlier than the 16th century.

Not the answer you're looking for? Browse other questions tagged etymology usage contractions origin-unknown christmas or ask your own question.