Most Christmas pudding recipes call for both sultanas and raisins.

It is my understanding that a raisin refers to any dried grape.

A sultana is both the name of a seedless grape, originating from Smyrna in eastern Turkey, and the name of the raisin deriving from that grape.

I think Americans call them all raisins anyway, so that the Australian breakfast cereal Sultana Bran is known as Raisin Bran in the USA.

But I am still puzzled as to why recipes specify both sultanas and raisins. The sultanas are much nicer than the seeded raisins, and I can't think it would be to the detriment of the Christmas pudding if you included all sultanas.

And before some boring individual observes that 'this is off-topic because it is about cookery, not the English language', I would also be interested to know if the origin of sultana has anything to do with the wife or concubine of a sultan. The OED supplies nothing on etymology.

I would expect the recipe would be as easily understood in the UK if "raisins" were replaced by "dark sultanas;" however, this is contested in the comments below.

The issue of seeds is not relevant, as the vast majority of raisins are produced from the Thompson Seedless grape, including those known as sultanas. From Raisin Grape Varieties:

However, the nomenclature issue is less clear-cut than I originally thought; the same book has this to say about the Thompson Seedless grape (emphasis mine):

The variety’s most widely accepted name in the literature is ‘Sultanina,’ a derivation of ‘Sultanieh,’ believed by some to be a recognition of a sultan’s appreciation for or ownership of the grape, or of its possible origination in or near the town Soultanieh, which is situated in Persia not far from the Caspian Sea. Other synonyms are ‘Oval Kechmish’ (Iran, Persia), ‘Kouforrogo’ (Greece), ‘Tchekirdeksiz’ (Turkey), and “Sultana” (Australia and South Africa).

There is another grape described near the end of the chapter as a "misnamed variety:"

The earliest introduction (mid-1800s) of this misnamed variety was by a Mr. West, a Stockton nurseryman. It was distributed as “Sultana” under the mistaken impression that it was the variety from which the ‘Sultana’ raisins of commerce were produced. Colonel Agoston Haraszthy also imported the same variety from Spain in 1861. It probably was introduced into Europe from Asia Minor. It is described under the name ‘Round Kishmish’ in French ampelographies, and should not be confused with the true ‘Sultanina’ (Sultana) that we know as ‘Thompson Seedless.’

AmE usage seems a bit "variable", but I think everyone in the UK recognizes the same distinction...

Raisins are dried white grapes (pictured #3 below).
They are dried to produce a dark, sweet fruit. The grapes used are usually Moscatel.

Sultanas are also dried white grapes but from seedless varieties.
They are golden in color and tend to be plumper, sweeter and juicier than other raisins.
Also referred to as Golden Raisins in the US. 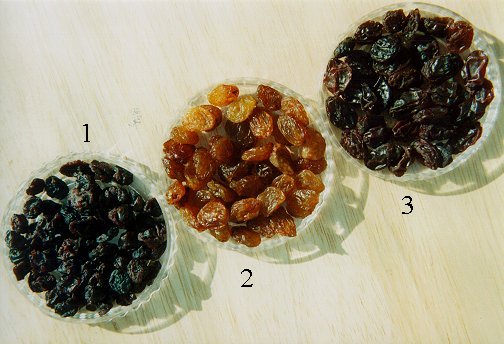 That may not be the clearest possible picture (currants are usually much smaller than raisins). OED doesn't explicitly say why the usage arose, but the relevant definition (in full sultana raisin) is in the entry with the primary definition wife (or concubine) of a sultan. So the etymology is undisputed, even if it's not clear exactly how the culinary sense came about.

Crazy how wrong all these answers are. Sultanas are dried differently than raisins. Raisins are sun dried sultanas are diped in oil and acid and dried.