I'm looking for a good antonym to discombobulate. I'm aware that the word is made-up American slang and as such there is no such thing as to be combobulated.

I think that "clear headed" and "in control" describe the opposite of discombobulated fairly well, if not fully or in a single word. On the other hand, we're talking about a fairly silly word that's used in many different ways. Being out of control doesn't necessarily imply discombobulation, either, so it's really just one facet of what a proper antonym could imply.

I'm not sure "enlightened" works at all. Enlightenment connotes some attained knowledge or state of personal development, whereas discombobulation is entirely a state of mind. An enlightened person, on being abruptly woken from a sound sleep, would be no less enlightened for being temporarily discombobulated.

I would use "composed" or "composure" as an all-purpose antonym for "discombobulated" or "discombobulation" but it lacks a little something in the verb form: I could discombobulate myself or someone else; I could compose myself, but I wouldn't compose someone else. I would instead help them to become composed.

The current antonym appears to be recombobulate, as least as this sign from Mitchell International Airport in Milwaukee, Wisconsin would have you believe (image via the Milwaukee Journal Sentinel): 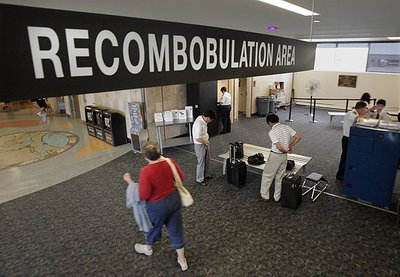 That’s the place at TSA checkpoints where you get to put your shoes and belts and jackets and piercings back together.

I would suggest that "coherent" is a succinct antonym for "discombobulated."

If discombobulated is understood to mean "confused and wavering," then coherent, meaning "logical and consistent in form or though," counters it very well.

"Together" or "put-together" can be used as an adjective to mean level-headed or well organized. "Level-headed" and "organized" are good words as well, in that case.

Martijn Pieters is one of the most together people I know. Among the discombobulated questions on Stack Overflow, nothing can faze him.

Antonyms would include: clarify, organize, enlighten

Having psychological orientation e.g. the patient was alert and oriented

Not the answer you're looking for? Browse other questions tagged word-choice antonyms is-it-a-word or ask your own question.

1
An antonym for “daylight”
6
Is there a word for days of mental clarity?
4
Word to describe a person who has a lot of experience in a specific field
7
What is the opposite of decoupled (computer science)
0
What is an antonym for dense in the context of material properties?
40
What's an antonym of demonize (other than deify)?