NOTE: This question is primarily related to the etymology of a compound noun which is not in The Dictionary.

There is a hat this year called “Handegg”, given out for a posting that reaches a score of +7. But here’s the problem: the word handegg does not occur in the Oxford English Dictionary! Neither does hand-egg nor hand egg.

Although that looks like five questions, it really is only one. To be accepted, only the first question needs answering. The others are just elaborations on the first.

Background: I’m asking because I kept reading handegg as handbag, which I genuinely thought it was until only a couple minutes ago when I was disabused of this misreading, but that only brought new mysteries. In the accent of Green Bay, Wisconsin, bag and egg can seem to have the same vowel due to the bag–beg merger, so maybe this is how I misread it.

CBS Sports has this nice article explaining the origin of the word, including a newspaper snippet from 1909:

To the Editor of The New York Times:

Football is certainly a misnomer, for the game is played not with the feet but with the hands, and the ball is not a ball but an egg.

I propose that the game be played with the feet and with a ball, or else that it be called “hand-egg.”

Hand-egg is the proposed word for what has been named football when describing a sport in which an egg is moved using one's hands, instead of an activity where a ball is moved with one’s feet.

It's a football reference.

From hand +‎ egg, by contrast to football meaning “soccer”, with the notion that the respective sports are “neither foot nor ball” due to the predominant use of the hands and the elongated form of the ball.

American football. As opposed to football/soccer, where players actually kick a ball with their feet, American football involves players carrying an egg-shaped object in their hands. 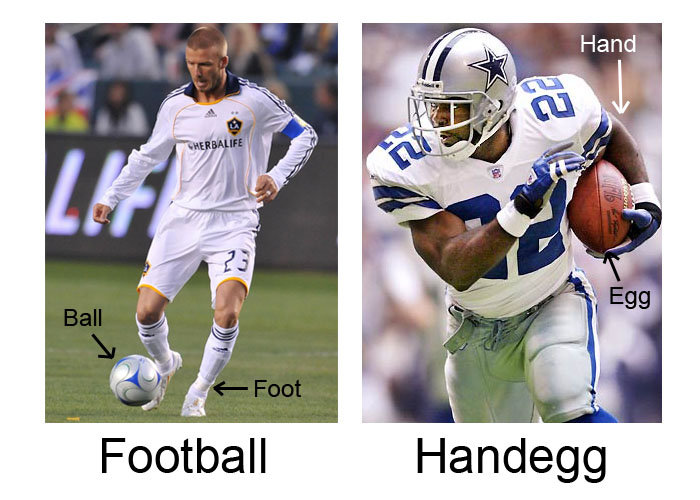 A handegg is an American football.

It doesn't (often) touch the foot and isn't (much of) a ball shape.

Handegg is a village in Switzerland, in the Canton of Bern, somewhat near Lucerne. Beautiful place, I am sure, but just why they named that hat after it escapes me.

It's an American football. It could also be related to Rugby football as rugby players are jovially known as "egg-chasers" in Britain.

Blame the English, they invented the names for all of the sports derived from soccer.

Association football (soccer) came first.
Then the English named the next game rugby football, after the town in England that changed the rules of soccer.

Then others derived games from rugby, still keeping the football name.

If you're English and you want to whine about the names your country gave the sport, then harden up and go play something with some contact in it.

22
Name for fine hair on human skin
19
What does the phrase "stone-gloved first baseman" mean?

10
Chandlery: From candles to ships
6
What’s a “backarapper”?
1
Does 'lending' an object require its relocation?
2
How did 'estate' evolve to mean 'area of land or property'?
9
Evolution of the word "dick"
6
Etymology of the word *plane* as used in *airplane/aeroplane*
10
Did a "spliff" originally refer to a mixture of tobacco and cannabis or just cannabis?
2
Etymology and usage of "enfetter"
3
What’s the origin/etymology of “mm-bye”?