Does the word 'incrementation' exist?

To increment a variable makes an incrementation.

One language wiki says it does, while MS Word and several dictionaries say there is no such word.

Whether a word can be said to "exist" or not is a very difficult question whose answer depends on many things. Clearly, for example, the sequence of characters that "incrementation" comprises exists, or otherwise you couldn't have written it down in the first place!

So, instead, I will answer an easier and less philosophical question: are there a number of uses of "incrementation" in the wild with the meaning you suggested? The answer is decidedly yes.

Now, whether that's a good choice, of course, is something else entirely. Some people might say "incrementation" is too technical or constructivist of a word for regular, everyday usage. In that case, you should stick with just "increments" or "incrementing" instead of using the less common word.

There are about 358,000 Google hits for "incrementation" (with upright quotes, to limit searches to pages with this exact word), so it surely exists as a word in actual usage—even though Google results are not an exact measure of anything and even though there are probably occurrences of the word in languages other than English, too.

Dictionaries like Merriam-Webster and Oxford dictionaries do not contain it, but they often lack new words and words with limited scope of use. This particular word might be common enough to make its way to dictionaries, but this is not automatic; their editors need to do things, and they also exercise their judgment. Dictionaries also have normative aspects: words may be excluded since they are considered as “not correct” in some sense. Spelling dictionaries like those used by Microsoft Word tend to be more limited than large general dictionaries, since when a word is rare, its occurrence in text may well be unintentional, a “typo” or other mistake, so it is useful to inform the user about a potential problem.

It's common in computer science to turn verbs into nouns simply because labelling processes is at the heart of what we do.

The verb for this is to reify (or to objectify), which itself has the noun form, reification.

Incrementation isn't a pretty word. Stylistically, I'd prefer to use increment as an adjective, 'the increment operator', or using 'incrementing' as a noun, where possible, but I certainly agree there are places where such a word could be valuable.

Is it a word or isn't it? There's no formal way to say, because there's no definitive source in English for what is a word and what isn't. Consider that many programming terms don't mean what their general English equivalents mean. Many terms don't appear in dictionaries at all.

It's understandable and it communicates a familiar idea. If you ask me, yes, it's a word.

Yes. It means the act of incrementing: Incrementation of the counter occurs once a second. It could also mean the result of incrementing, though I doubt that that meaning is used often.

Although the word incrementation has been seen in print, it occurs only incredibly rarely according to this Google N-gram: 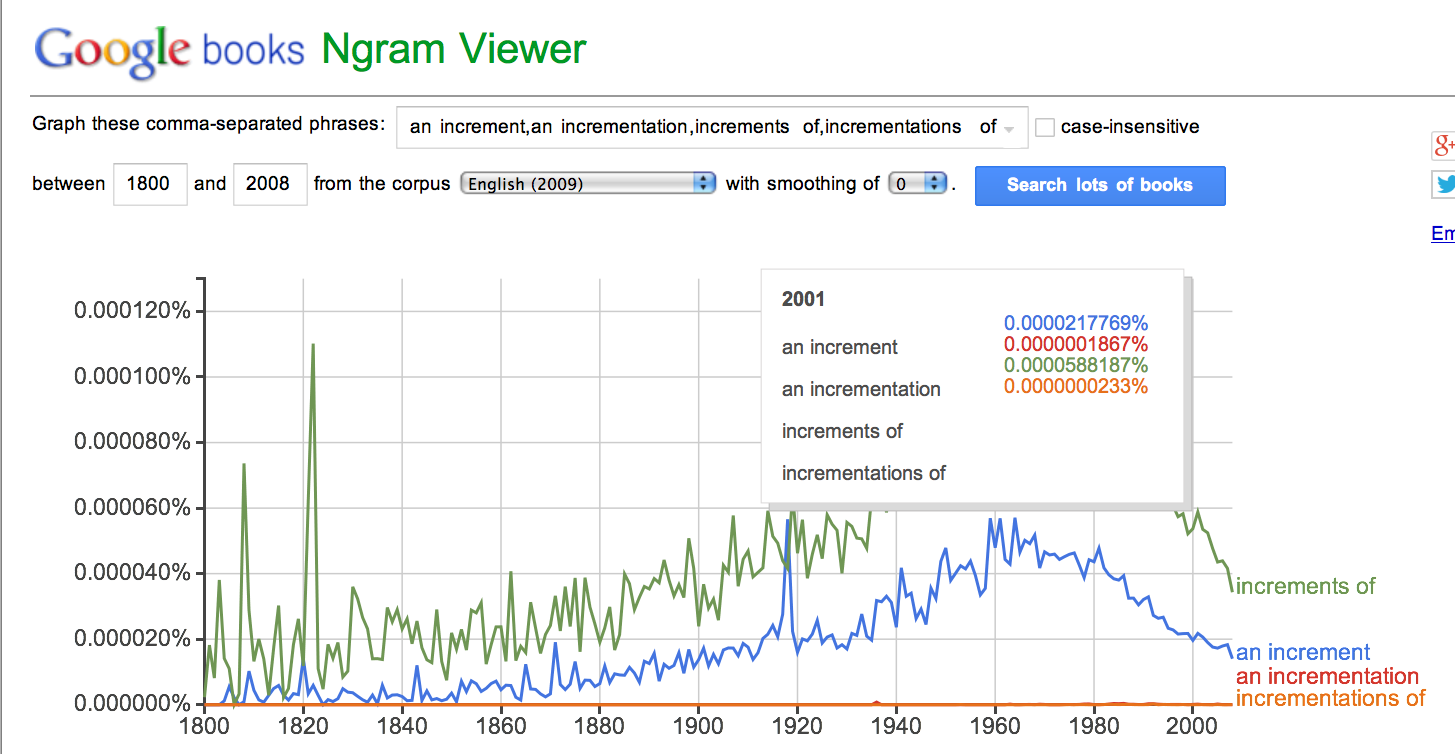 To control for verb use instead of noun use, I’ve put an in front of the singular noun and of after the plural one.

As you see, there is a frequency difference of 3 to 4 orders of magnitude. Moreover, if you look at actual specimens, you will find that most of them could have been far more felicitously worded had a different word been chosen.

I wouldn’t use it, but whether you choose to use this rare word this is entirely up to you.

Not the answer you're looking for? Browse other questions tagged is-it-a-word technical derivational-morphology or ask your own question.

8
Isn’t “Eye-glazing” a popular word? Why isn’t it included in major English dictionaries?
1
Is “habitated” a word?
1
Is there a language or subset of English for technical writing
3
Name of a word where you can continually remove one letter from the beginning or end
0
Does the word “dashily” exist in English?
9
is variablize or variabilize a word?
2
Is “startlement” a word?
5
Is multifunctionality an actual word?
1
What is the correct term for a fear of breasts?